In a summit organized by an award-winning Facebook community called Surviving Hijab, many veiled and unveiled Egyptian women discussed the many considerations and challenges involved in the personal decision to wear hijab. 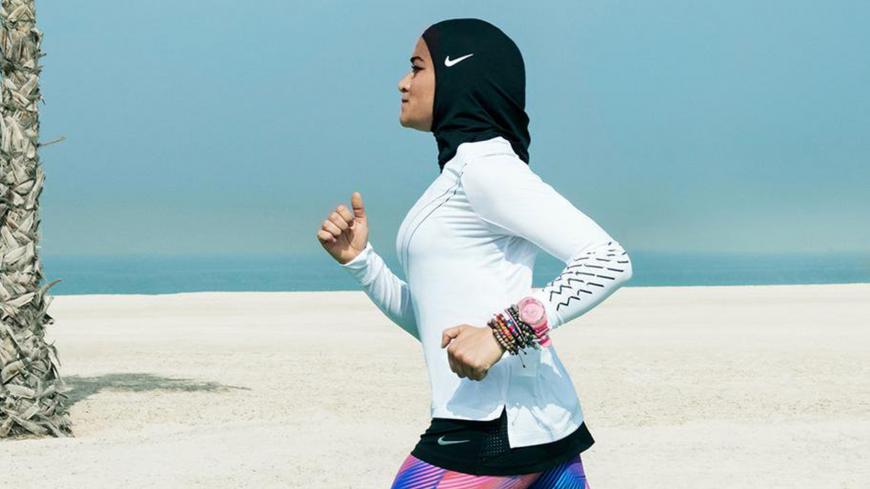 Manal Rostom, the founder of the Surviving Hijab Community and the first hijabi woman be featured in a Nike Middle East campaign, is seen in this image posted Nov. 5, 2017. - Twitter/TheNationalUAE

Egypt, which has veiled ballerinas, veiled orchestra conductors, veiled TV anchors and veiled ministers, may seem an unlikely place for hijabi women to face discrimination or peer pressure over covering their hair.

Runner Manal Rostom, the first hijabi woman to be featured in a Nike Middle East campaign, disagrees. Four years ago, she founded the Surviving Hijab Community to provide support for women who face pressure to take off the hijab, disdain for wearing it or claims that certain jobs cannot be done in it.

“Definitely, wearing a hijab has become a different decision. I want to prove that hijab does not prevent women from doing what they want,” she told Al-Monitor.

On July 19, Surviving Hijab — a closed Facebook group — held its first summit at the Greek Campus in Cairo, where 400 attendees and 12 speakers — veiled, unveiled or de-veiled — shared their experiences.

One of the lead speakers was Enjy el-Shazly, known for being Egypt's first veiled ballerina. “When I started, many people told me that one could not dance ballet with a hijab. [They] do not accept the idea that ballet is an art and that I can wear modest clothes during performance," el-Shazly said in her speech.

"The first time I performed with hijab, I was shaking. I felt many mixed feelings. I thought that people may judge me based on my appearance, not my performance," el-Shazly told Al-Monitor. “But to my surprise, I was admired … so I took part in this summit to encourage girls to overcome their fears. Hijab is not a limitation and we are a proof.”

Rostom, a clinical pharmacist and a hijabi model, agreed, saying that hijabi women cover their hair, not their brains and creativity. "This summit is a trial. I am not sure whether we can hold it on an annual basis. We have just started our journey," she told Al-Monitor, adding, "This is not a religious event. You can say that it is a social event that aims to empower women. … We want to urge hijabi women to continue to hold on.”

Surviving Hijab currently has 655,000 members on Facebook. In 2018, it won a Facebook Community Leadership award, recognizing it as one of the largest women-only movements in the world that fights for the rights of women.

At the end of the summit, Rostom said that the first meeting not only showcases role models but “helped lay the ground for productive dialogue and interaction” between hijabi women and between hijabis and non-hijabis.

She added, “Through such meetings, we offer psychological support for women and girls who think that hijab can be a barrier or an obstacle," she added.

The name of the community is provocative. Do hijabis really face such serious obstacles and discrimination that threaten their survival?

"It is hard to say there is discrimination against hijabi women in Egypt. Nevertheless, there are certain problems that need to be addressed," Rostom said, citing “peer pressure” and “categorizing” as two examples.

“Do not call me a hijabi anchor. I am a TV anchor,” said one of the participants in the panel discussions.

Rostom pointed out that women post to the Facebook page about the problems they face. In the summertime, the number of complaints concerning the burkini ban in hotels increase. “Banning burkinis in some Egyptian resorts is totally unacceptable as long as the material is appropriate,” Rostom said. “As early as 2015, we started receiving complaints from many girls through the Facebook group complaining that some resorts in Ain Sokhna and North Cost ban burkinis. We tried to contact these resorts" but got no results. "The problem still exists.”

The debate over burkinis in Egypt prompted the Egyptian Tourism Ministry to issue regulations in 2017. The regulations hold that burkinis made of materials that do not compromise pool hygiene cannot be banned.

In the last few years, several high-profile women have decided to remove their hijabs. One notable example was actress Hala Shiha, who decided last year to stop wearing the hijab she left her career for 14 years ago. Shiha’s return to the screen sparked controversy over hijab, particularly because it came at a time of rising anti-Islamist sentiment in Egypt, fueled by the government's security crackdown on supporters of the Muslim Brotherhood, which Egypt outlawed in September 2013, and a media narrative that has since been in lockstep with the military-backed regime.

Engineer Aliaa Salem, who decided to take off her hijab recently, told Al-Monitor, "I am not against hijab. I decided to take it off because I felt that I was just going with the flow, without feeling that I was wearing it for Allah." She admitted that peer pressure played a role in her decision to wear it. "In 2004, with the emergence of many young preachers like Amr Khaled, many girls wore hijab. It was trendy at that time."

Salem believes that hijabi women do not face discrimination in Egypt. "Now there are veiled TV anchors, flight attendants and more. We should not exaggerate by saying that veiled women are suffering. I was a veiled woman and I got my job while wearing a hijab," she said.