Tourist-hungry Egypt finds itself stuck in the middle of the burkini debate. 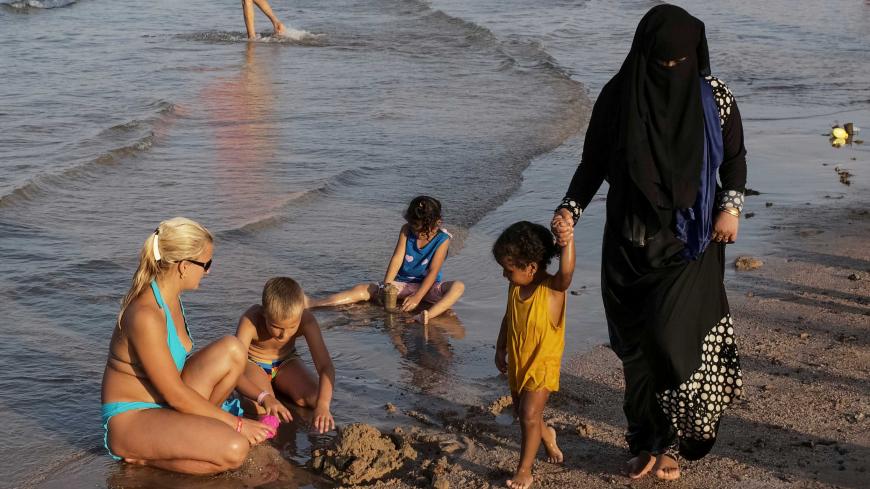 Tourists walk as others relax on the beach in the Red Sea resort of Hurghada, Egypt, July 17, 2017. - REUTERS/Gleb Garanich

Banning the burkini, a full-body swimming outfit, on public beaches has been a controversial issue in many countries. But in Muslim-majority countries where many women are veiled, the debate can reach a boiling point. The burkini battle stretched into Egypt last year, spawning a public outcry and putting the country’s Tourism Ministry under fire.

After receiving complaints from burkini-wearing women who were not allowed into some resort pools, Egypt's Tourism Ministry recently canceled — briefly — the burkini ban, urging hotels with multiple swimming pools to at least allocate one of them to hijabi women. The Egyptian Hotel Association, which is affiliated with the ministry, distributed the ministry's Aug. 3 decision: The burkini should not be banned as long as it is made of typical swimsuit materials and meets hygiene regulations. The association said the decision is designed to eliminate any claims that burkinis are banned for any religious-related reason or that hotels enforce discriminatory policies.

However, less than 24 hours later, the ministry reignited the still-smoldering burkini row by rescinding its decision, saying each hotel is now authorized to allow or ban burkini-wearing women from their pools depending on the types of tourists they host and the season.

Actually, the burkini is banned in many coastal resorts such as Dahab, Hurghada, Gouna and Ain al-Sokhna. Veiled women are also banned from entering some restaurants in Cairo, especially at night when alcohol is being served.

Trying to spotlight the key reasons behind the burkini bans, Al-Monitor spoke to a pool attendant at a renowned hotel in Ain Sokhna, a resort town on the Red Sea coast.

"The hotel justifies the burkini ban by saying that its material has a negative effect on pool hygiene. Swimwear should be made of adequate fabric. I totally agree with that,'' said the attendant, who spoke on condition of anonymity.

Before the burkini ban, some women, the attendant continued, were swimming in the pool with cotton clothes, which aren’t approved for pool use for a litany of reasons: They can carry contaminants and they can be poorly made and shed fibers that clog pool filters, affecting the chemical balance.

“We, the pool attendants, have been plunged into a string of controversies with many veiled women because of this issue. Once, I asked a woman to get out of the pool since she was wearing cotton clothes. She insisted that her burkini was not made of cotton. My colleagues also were exposed to similar situations.”

He added, "How can we determine that the burkini's material is safe? Should we inspect females before allowing them to the pool?”

Many rights organizations and hijabi women, nevertheless, voiced their anger, charging that a ban is a form of religious discrimination and a flagrant encroachment on personal freedom. Social media has also been flooded with multiple posts by veiled women and girls narrating how they were banned from resort pools.

In an interview with Al-Monitor, mountain climber Manal Rostom, who is the first Egyptian veiled woman to appear in a Nike Middle East campaign, sharply criticized the burkini ban, calling it oppressive and discriminatory.

“This decision is absolutely unacceptable. It does not make sense. In France or any other country, we could justify this ban since there is a lack of awareness of Islam. But in an Islamic Arab country like Egypt, how can we accept this? Did the officials really thoroughly study this decision before issuing it?'' Rostom asked, adding that every woman should wear whatever she wants without any intervention.

Rostom, the founder of one of the biggest Facebook groups for veiled women, said she has never been banned from using pools while wearing a burkini in Egypt, but she received many complaints from Egyptian women who were exposed to this situation.

"Last year, I called the Tourism Ministry's hotline to deliver women's complaints. Frankly speaking, they listened to me and took the names of resorts that banned burkinis. But the recent decision is nothing but ignorance. They want bikinis only in the pools," she said.

The veiled mountaineer, meanwhile, refuses to wear cotton clothes or burkinis made of poor material. “They can ban women who, for instance, wear T-shirts and trousers or appear to wear unsuitable outfits," she noted.

Though the ministry's recent decision has been showered with criticism, Hossam Akawi, a member of the Egyptian Travel Agents' Association's general assembly, told Al-Monitor that the decision bans certain types of burkinis, but not all of them. "It is allowable to wear the one-piece burkini, which is like a diving suit. But there are some styles of burkini that are like abayas [cloaks] and made of low-quality materials. These styles definitely should be banned," Akawi said. To claim the burkini ban is religiously motivated is an exaggeration, he added.

Each hotel should make the decision it finds favorable to its guests' comfort, he said. "Women are free to wear whatever they want. It is a personal freedom and we have to respect it. In return, resorts are also free to ban or allow the burkini. Before checking in to any resort, the client can review its terms and conditions and decide whether to opt for it or not," Akawi noted.

He added that some organizations book multiple rooms at five-star hotels for many people, and sometimes they offer women low-quality burkinis.

“In many cases, the attitude of those people is chaotic, giving tourists a bad image of the country at a time when we are exerting all-out efforts to revive this vital sector. All these reasons prompted hotels to tighten their control over the pools and beaches," Akawi concluded.