Debates about whether women should be allowed to wear burkinis in swimming pools have been reignited in Egypt as the Arab country hopes it can use the summer season to compensate the losses its tourism sector sustained because of the Russian war on Ukraine. 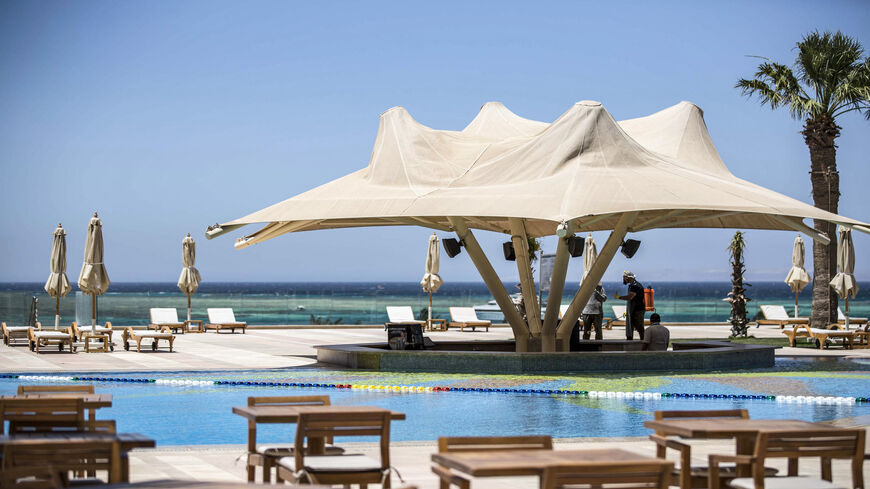 The pool area at the Hilton Hurghada Plaza Hotel is seen at a Red Sea resort in Hurghada, Egypt, June 19, 2020. - Khaled Desouki/AFP via Getty Images

In Egypt, the same swimwear is still debatable and debates on it have intensified recently, especially after the Senate, the upper chamber of the Egyptian parliament, discussed the case of some local hotels and resorts turning away women who do not want to show some skin as they go swimming.

However, discussions on the issue have thrown light on its divisive nature.

Sen. Ahmed Qenawi called on the management of local hotels and resorts to give women the freedom to cover their bodies however they want as they go swimming.

"I believe women should be allowed to wear whatever they want when they go swimming, provided that they do not violate the hygiene rules imposed by tourist facilities," said Qenawi, member of the Committee on Culture, Antiquities and Tourism in the Senate. He told Al-Monitor, "There is an urgent need for unified regulations to be applied to all tourist facilities — ones that do not discriminate against anybody."

His view is vehemently opposed by some colleagues who call for banning the all-in-one female swimsuits at the nation's hotels and on its beaches.

"We are not discussing a religious issue here," he said during a special session on burkinis in the Senate May 16. "However, burkinis stick to women's bodies and become more revealing than other swimming outfits."

Fakharani's view stirred up a hornet's nest on social media where users wrote up a storm of comments, either supporting or criticizing him.

Some people said the whole thing is being blown out of proportion, while the Senate has more important issues to debate, especially with Egypt deeply suffering economically from fallouts from the ongoing war in Ukraine.

Nonetheless, the debate over burkinis does not seem to be trivial or marginal in a country whose economy is heavily dependent on tourism.

This debate comes as the populous Arab country prepares for the summer season, a time of the year when the nation's tourist facilities prepare to receive tens of millions of local tourists.

Egypt also receives millions of tourists from fellow Arab states, especially from oil-rich Gulf states, and a decision by hotel managements to ban or allow burkinis can decide the type of guests they will receive.

This comes at a time when local tourism specialists call for using the summer season, a time of school vacations in the country, to compensate for the losses caused to the tourism sector by the war in Ukraine.

"We expect domestic tourism to boom in the coming weeks," Magdi Selim, former Ministry of Tourism senior official, told Al-Monitor. "This will compensate the losses the tourism sector sustained in the past few months."

This positive forecast for domestic tourism comes hard on the heels of the easing by Egyptian health authorities of coronavirus restrictions, with infections dropping noticeably across this country.

The local tourism sector has been hit hard by the Russian war on Ukraine, with tourists from Russia and Ukraine making up a major chunk of incoming tourists in the past years.

The tourism sector, which contributes 11.9% to Egypt's gross domestic product and employs 9.5% of the national workforce of 27 million, is hugely important for the economy.

Together with remittances from Egyptians working in other countries, industrial and agricultural exports and the Suez Canal, the sector is a major foreign currency earner.

Effects from the Russian war on Ukraine have compounded the toll COVID-19 left on the sector.

Egyptian authorities worked hard in 2020 and 2021 to keep the sector going, including by absolving hotels and tourist facilities of some bills and offering monthly payments to millions of tourism workers.

The war in Ukraine has precipitated a reformulation of tourism promotion policies as Egyptian tourism planners have started turning their attention to markets that have not been affected by the war, including in Asia, Western Europe and Latin America.

The debate about burkinis appears around this time almost every year, with more local tourists seeking to spend their summer vacations in the coastal cities and at tourist facilities nationwide.

In June 2021, a woman was prevented from using the swimming pool of a hotel for wearing the Islamic swimsuit, giving rise to nationwide debates about whether hotel managements should be allowed to decide.

Almost a year earlier, a woman was bullied by other women in the swimming pool of another hotel for wearing a burkini.

Some people view the ban imposed by some hotels against burkinis a bit odd, especially in a predominantly Muslim country like Egypt where laws are Sharia-based.

The same ban is opening the door for debates about women's freedom to cover their bodies or reveal them.

In a way, however, these debates are tinged with a type of religious fervor that unites religious members of society behind the rights conservative women should enjoy as they take a dip.

Some people say the ban on burkinis is tantamount to suppression against those who do not want to show some skin.

Meanwhile, those advocating women's freedom to wear whatever they want call for giving conservative women the right to cover themselves up, so long as other women have the right to reveal their bodies.

"This freedom is enshrined in the Egyptian Constitution," said Sanaa al-Saeed, member of the National Council for Women, the local watchdog that defends women's rights. She told Al-Monitor, "We cannot force women to abide by a revealing dress code as long as they want to cover their bodies."

The Ministry of Tourism and Antiquities said some hotels and resorts impose specific rules to preserve their identity.

"Some hotels are regulated by the ministry, while others are not," Ghada Shalabi, deputy minister of tourism and antiquities, told the Senate May 16.

Nevertheless, the Committee on Culture, Antiquities and Tourism in the Senate, which received complaints recently about some hotels in the Red Sea town of Ain Sokhna preventing women who wear burkinis from using their swimming pools has decided to closely follow the burkini issue.

It said it would report violations by hotel and resort managements against women's right to wear the Islamic swimwear to tourism authorities.

"We have asked the Ministry of Tourism to take action against hotels whose managements prevent women covering their bodies from using their swimming pools," Qenawi concluded.