Many Lebanese have been complaining about high entrance fees to swimming pools and water resorts amid low salaries due to the local currency depreciation. 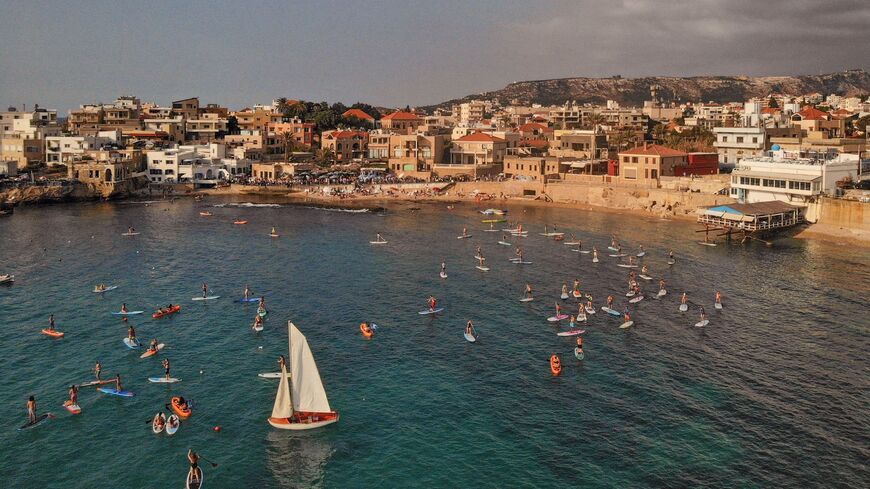 An aerial view taken on Oct. 2, 2021, shows people swimming and paddling off the coast of the northern Lebanese city of Batroun. - IBRAHIM CHALHOUB/AFP via Getty Images

BEIRUT — With the advent of summer 2022, the Lebanese are complaining about the high entrance fees to private resorts and swimming pools in Lebanon. Low-income employees can no longer afford to go to these resorts, which have seemingly become limited to well-off families.

Joe Hnein, 50, a father of three and an employee at the National Social Security Fund, told Al-Monitor, “As a family provider, I am no longer able to spend a day at the beach with my family due to high prices. The entry fee ranges from 200,000 Lebanese pounds ($133 at the official rate, $6 at the black market rate) to 350,000 Lebanese pounds ($233 at the official rate, about $12 at the black market rate as of the time of this writing) per person. That is not to mention the prices of food and drinks.”

“This recreational activity was essential to every family to chill, but it has become out of reach now after the local currency’s collapse and our efforts to adapt to the economic hardships. We are following an austere way of living, and this is exhausting for me and my children.”

Hnein, similar to many other people, has not been able to spend a day by the pool or swim this summer given the elevated cost compared to his income.

A simple calculation shows that if a small family like Hnein’s decides to go to the swimming pool where the entrance fee is 200,000 Lebanese pounds per person, without including any other expenses, the sum will be equal to 1 million Lebanese pounds ($666 at the official rate, $33 at the black market rate), which is the equivalent of the average monthly salary for a large number of Lebanese.

May Fawaz, 30, told Al-Monitor, “It is very expensive to go to the pool now, especially when calculating all costs, including entrance fees, transportation, food, drinks and sunscreen. That is why we no longer go to the pool but rather to coffee shops and the mall to which the outing is cheaper.”

She added, “We are being denied the simplest things that used to help us cheer up and be in a better mood in the summer.”

While the cost is high for both Hnein and Fawaz, who live in Beirut, the fee is slightly lower in the northern and southern parts of the country. Nisreen Merheb, 33, told Al-Monitor, “The entrance fee to the swimming pool in northern Lebanon is no less than 100,000 Lebanese pounds (about $67 at the official rate, about $3 at the black market rate), which is high compared to the income most of the people here earn.”

Mohamad Bazzi, owner of Bar D'amour Beach in southern Lebanon, said that the sector has been affected by the Lebanese pound-to-dollar exchange rate crisis, like all other sectors in the country.

He told Al-Monitor, “Everything we buy, including diesel, chlorine, maintenance and supplies, is paid in dollars, and their prices are very high. This is added to the employees’ transportation fees. All of that increased the operating cost.”

Jean Beyrouthy, head of the Syndicate of Beach and Resorts in Lebanon, told Al-Monitor, “The fees are acceptable at the beach resorts and swimming pools. They are not considered high compared to the operational costs, especially the cost of energy, which makes up from 30% to 40% of these costs.”

He pointed out that all the required standards are met at all swimming pools, which were forced to raise their prices in order to remain open. He expected occupancy this season to be good and added that it is acceptable so far.

Pierre Achkar, president of the Syndicate of Hotels Owners in Lebanon, said in an interview with Voice of Lebanon on June 21 that hotel reservations are still low but are expected to increase in the coming period, like last summer.

Achkar expects a large number of tourists to come to Lebanon this year, which will bring into the country the dollar currency that is badly needed in the cash-strapped country to import most of its basic needs.

This comes at a time when the Ministry of Tourism issued a decision June 2 allowing tourism establishments “exceptionally and optionally” to price their bills in US dollars between June 2 and Sept. 30 in order to accommodate the high number of tourists and expats expected this summer. When converting the high prices from the Lebanese pounds into dollars at the black market rate, prices might end up being very affordable and attractive to those earning foreign currencies.

The ministry’s decision was issued following a meeting between Tourism Minister Walid Nassar and the heads of the tourism unions, in light of the extraordinary circumstances the country is going through, especially the fluctuation of the Lebanese pound rate against the dollar.

Meanwhile, the Lebanese people are complaining about the high prices of goods and services inside and outside tourism institutions, compared to their salaries, especially those who are still paid in Lebanese pounds. Yet the situation is unlikely to improve anytime soon amid a day-to-day deterioration in the economic situation and absence of any serious measures by the officials to stop the ongoing meltdown.

In addition to soaring prices, the Lebanese are hit by daily crises such as the ongoing lack of medications, lack of bread on shop shelves and fluctuating fuel prices, with some of the gas stations often closing their doors.

The Lebanese fear that the Tourism Ministry’s decision will open the door to uncontrolled prices at tourism establishments in light of Lebanon’s difficult situation.

Nada Nehme, vice president of Consumers Lebanon, a local association protecting consumers, told Al-Monitor, “The ministry has legitimized chaos, as pricing in dollars is basically a violation of the Consumer Protection Law, which stipulates that the price of goods and services shall be declared in Lebanese pounds.”

She added, “There is no trust, and every institution will price based on its liking, and certainly the relevant authorities are not exercising any control.”

Nehme noted that such decisions are “capable of changing the behavior of the individual. I am trying to firmly establish the idea that going to a swimming pool has become a luxury, especially since most people cannot afford recreational activities. This is unacceptable. The expatriates who came to Lebanon are an exception and can afford this cost, but the public and private sectors’ employees can't.”

The high entrance fees to beaches reignited the talk on the need for the beaches in Lebanon to be public and not only affordable for a specific group of people. In light of the current reality, well-off and affluent persons are the only ones able to go to beaches.

Mohammed Ayoub, director of Nahnoo, an association focusing on public beach properties, told Al-Monitor, “In all world countries, the municipality and the concerned ministries manage the beaches. This is what needs to be done in Lebanon,” where most beaches are exploited as private properties.

He added, “Law No. 144 of 1925, which bans [private] investment of the Lebanese coast or building on it, has been violated repeatedly. They (beaches along Lebanon’s coast) need to be open to the public unlike what has been happening in the country for decades.”

Hundreds of tourism facilities are spread along the Lebanese coast, from north to south, which shrunk the public space that the Lebanese can go to for free or cheap.