The latest changes at the top levels of Syria's military and intelligence structures point to Russian influence, but was it Bashar al-Assad's game plan all along? 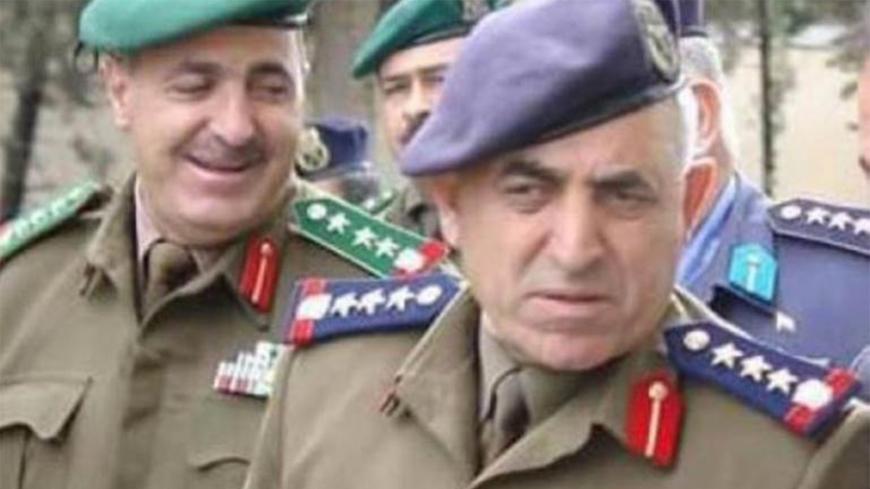 The latest appointments and changes in the top echelons of Syria’s military and security institutions have been viewed in the region as the result of Russian military pressure on Damascus. It's likely that Moscow does indeed seek to transform Syria's security institutions and to diminish Iranian influence in the country. However, the actual role of Russia should not be overestimated. Such staff-related changes are frequently due to the Syrian regime’s efforts to redistribute authority and, possibly, to receive benefits from foreign actors amid controversies between Damascus' allies.

The latest dramatic change took place July 7, though it has not been confirmed by pro-Bashar al-Assad media outlets. One of Assad's confidants, Maj. Gen. Ali Mamlouk, a Sunni and the head of the National Security Bureau, was appointed vice president for security affairs. Another influential official, Maj. Gen. Jamil Hassan, an Alawi and the head of the Air Force Intelligence Directorate, resigned.

Both men are on the US sanctions list. Moreover, both consider any dissent against the regime unacceptable. However, Mamlouk’s situation is slightly different. According to numerous sources, in spite of sanctions, Mamlouk has repeatedly traveled abroad for negotiations, to Europe, Saudi Arabia, Oman, Egypt and Turkey. Furthermore, in June 2018, he was involved in a dialogue with US intelligence. Mamlouk has earned a reputation for being able to maneuver between various centers of powers, though his alleged recent appointment may be interpreted in different ways.

On the one hand, Assad has an opportunity to appoint the second vice president and return to the pre-war situation, when current Vice President Najah al-Attar, 86, was accompanied by politician Farouk al-Sharaa, who keeps a low profile. On the other hand, Mamlouk’s appointment has been discussed for a while. Here, the principal issue is Mamlouk's ability to maintain his previous level of authority in the new office, which does not possess an extensive administrative structure.

Hassan allegedly left the top security post, which he had held since 2009, a few days after his term was extended by a year. This particular detail caused Syria watchers to presume that the actual reason for Hassan's resignation had nothing to do with alleged health issues. Rather, it was related to relations between Syria, Iran and Israel. Lebanese sources claimed that, in early 2019, Hassan received treatment at a Hezbollah-controlled hospital. However, some reports claimed that that Lebanese branch of Interpol had received a request to arrest him. These same sources tie Hassan’s resignation to the results of the four-hour negotiations between Israeli officers and Syrian security commanders, mediated by Russia, in late June in Quneitra.

Also attending the meeting were the leaders of the 5th Assault Corps. The corps was formed in 2016 with the active involvement of Russian military supervisors. It has embraced, among others, ex-rebel groups. The Israeli representatives reportedly demanded that the 5th Corps be integrated into Syrian government forces in order to stabilize the military structures. Israel further requested that pro-Iranian militias be moved farther from the border. The story has it that Hassan not only rejected Israel's suggestions, which were backed by the Russian commanders, but he walked out of the meeting, calling Iran “the true partner of the Syrians.” The commander’s inability to compromise ultimately caused the negotiations to fail.

Soon after, Israeli air forces undertook a large-scale shelling of Syrian targets. In fairness, the strikes also took place after a tripartite meeting in Jerusalem, initiated by Israeli Prime Minister Benjamin Netanyahu. It's possible the strikes were initiated on a different account.

Personnel changes have also impacted the heads of the General Intelligence Directorate, the Criminal Security Directorate and the Political Security Directorate. Charles Lister, a senior fellow at the Middle East Institute, rightly stated that the new leaders of the Syrian security structures have not proven to have close contacts with Iran. Furthermore, these officials are closely collaborating with the Russian military.

Whether the appointments are the result of Russian pressure and respective efforts to transform Syria’s security apparatus is an open question. Although Russia is interested in being a referee, Assad and his officials are trying to take advantage of this intention. For a while, Moscow has been perceived as trying to control the Syrian General Staff and the General Intelligence Directorate. Regional press claimed that Russians had taken a part in personnel shifts in June, such as the appointment of Maj. Gen. Akram Mohammed to the post of deputy director of the General Intelligence Directorate; Gen. Qais Rajab as head of the State Security Department in Tartus; and Brig. Gen. Ghassan al-Ali as head of the State Security Department in Hasakah.

According to some media reports, the Russian side proposed that an inspection committee be created in the Syrian army to “curb corruption.” It is noteworthy that all these intensive personnel shifts started when Damascus regained control over most of Syrian territory. Syrian military officers are actively discussing the need to "get the security and armed forces into shape," yet the notion of "reform" is still deemed unacceptable.

For instance, in the fall of 2018, a number of changes took place in the structures of the government and the military intelligence. Yet, back then, the regime did not abstain from appointing individuals on sanctions lists, thus disproving any speculation about its attempts to redeem itself before the international community.

The current security structure shuffle is basically part of a reform package, which is associated, among other issues, with previously declared changes in the Republican Guard and the special task forces. Notably, Gen. Nasser al-Ali, the new head of the Political Security Directorate, is originally from Manbij. This means he is familiar with the Kurds and the local tribal communities, including those living on the eastern bank of the Euphrates, an area outside Assad’s control. A source privy to the work of Russian military supervisors in Syria told Al-Monitor that Moscow strives to be a mediator and use the need to restrain Iran as a negotiation tactic. Perhaps this means allowing opposition forces to be included in the 5th Corps. In reality, however, Russia does not influence the personnel shifts directly.

The source, describing Assad as "an adamant politician," who tries to balance the interests of Tehran and Moscow, said that he stands to gain benefits from both. "The conflict between the so-called pro-Iranian and pro-Russian parties influences the arrests and appointments to a degree, but is not directly associated with it," he said. "The diversity of interests is often taken into account in the controversies and redistribution of authority within the administrative system — it is utilized as a factor to pursue the own interests of Assad and his associates.”

At the same time, Hassan’s resignation is linked to the changing dynamics of regional policy. In the context of Damascus’ negotiations with Gulf nations, the regime had to get rid of the “toxic” official. Another source closely connected to Russian diplomatic circles told Al-Monitor that Russia’s attempts to become a referee make it genuinely interested in cleansing the staff of the Syrian armed forces and security structures. Rampant corruption among the commanders and poor discipline undermine the armed forces' professional and combat capabilities.

In 2018, the Russian Academy of General Staff finished training the first group of high-level Syrian officers. Obviously, Russia continues to provide training programs for Syrian military personnel. Russian military intelligence members continue to provide for Gen. Suheil al-Hassan’s security, and the instructors still train new soldiers for the Tiger Forces. As Al-Monitor previously reported, these troops were used to create a buffer zone around Idlib to try to reduce both the number of pro-Iranian groups and the role of the 4th Division, which is led by Maher Assad, the president’s brother. At the same time, this measure caused casualties among the Tiger Forces and the 5th Corps, revealing the shortcomings of their combat efficiency.

“To have a grasp on Russia’s actual ability to influence the personnel policy, one should at least remember how difficult it was for Moscow to persuade Damascus to approve the list of Constitutional Committee members,” the diplomatic source said. “However, the regime clearly understands that, unlike Iran, Russia is actually able to help with the advanced training of servicemen and aid the general upgrade of the military and security structures.”