Israeli, Russian, US interests converge on Iran in Syria

At a trilateral meeting in Jerusalem, the national security advisers of Israel, Russia and the United States confirmed their common interest in limiting the presence of Iranian forces in Syria when peace finally comes. 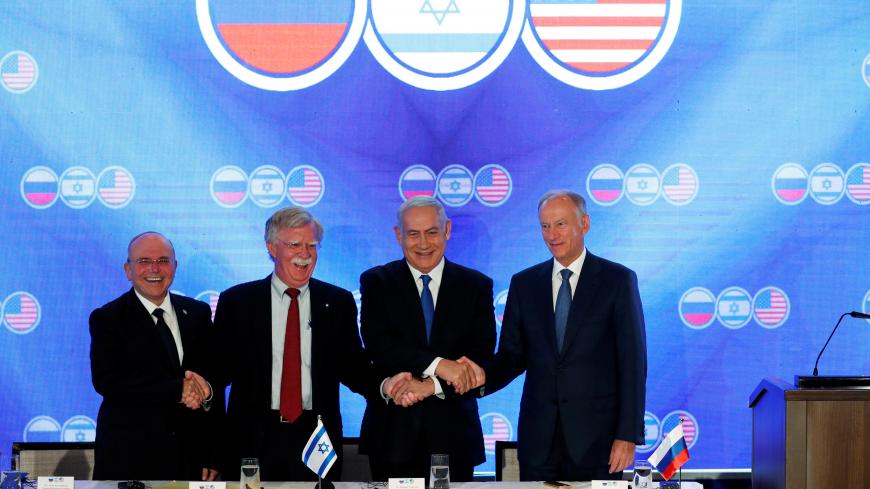 One photo from the June 25 tripartite summit of national security advisers in Jerusalem is worth a thousand words. It shows Israeli Prime Minister Benjamin Netanyahu, with US national security adviser John Bolton and Israel national security adviser Meir Ben-Shabbat standing to Netanyahu's right and Russia’s National Security Council secretary, Nikolai Patrushev, to Netanyahu's left. Netanyahu, with arms crossed, holds tight to Patrushev’s hand with his right hand and to Bolton’s hand with his left. With a particularly big smile across his face, the prime minister looks like the cat that swallowed the canary. Bolton’s smile is also one of satisfaction, while Ben-Shabbat looks like he can't believe he's actually there. Only Patrushev maintains a somewhat chilly, pensive countenance, like someone who finds himself at a party he would rather not be attending.

The tired old diplo-jargon that “the importance of the event is in its very existence” is particularly true as regards this historic summit. The big headline produced by the meeting was Patrushev’s dry statement that splashed cold water on the US-Israeli offensive against Iran mounted at Bolton’s instigation.

“Any attempts to make Tehran look like the main threat to global security, to put it in the same basket as ISIS or any other terror group, are unacceptable,” Patrushev told reporters. “Iran has been contributing a lot to the fight against terrorism in Syria, helping to stabilize the situation.”

Patrushev went on to say that Israeli airstrikes against Iranian military targets in Syria were “unwelcome,” adding that Russia and Iran have a joint anti-terrorism program: “We have ways of influencing each other and listening to each other … not through violence, but rather through dialogue.” To top it all off, Patrushev said that Russia has information showing that the US drone that Iran downed last week had entered Iranian airspace. In other words, it was a justified hit.

Inside the meeting room, away from the media, things were much better. The Russian, US and Israeli positions are far closer than their public statements suggest. While peace will not break out tomorrow in Syria, the strategic interests of each summit participant were found to be overlapping or at least congruent in many respects. The Russians were the most enthusiastic about the summit given their need for the United States and Israel to help end Russia's bloodletting and financial drain in Syria so it can finally start reaping the rewards.

“More than anything, the Russians resemble a chameleon,” a senior Israeli security source told Al-Monitor, speaking on the condition of anonymity. “They will change colors and blend into their surroundings anywhere you put them. They will identify their closest interest or common denominator in every situation and home in on it. This is the case now. They need [President Donald] Trump in order to complete the move into Syria, they very much want an easing of US sanctions, and they need coordination and understanding with Israel to ensure that the fire [in Syria] does not reignite, so they came to talk business.”

Generally speaking, the sides simply agreed on things that had been decided earlier, but did so with greater emphasis. On the day after the war in Syria ends, there will be no room for “foreign forces” in Syria, including from Iran. The Russians will prevent Iran’s entrenchment in Syria to the extent possible and make every effort to keep Iranian forces and Shiite militias 80 to 100 kilometers (50 to 62 miles) from the Israeli-controlled Golan Heights border. Every effort will be made to rein in weapons smuggling over land and by air.

Israel did not commit to ending aerial strikes, but told the Russians that it would only take action if it finds that there is no other way “to remove an immediate threat.” At least two recent attacks have been attributed to Israel on the part of the Golan still controlled by Syria, where Iran and its Hezbollah proxy are seeking to build the infrastructure necessary to establish a second front against the Israel Defense Forces (IDF). The Israelis insist they will spare no cost in preventing this from happening, with Bolton’s backing.

The Russians made clear that US assistance is vital to stopping the bloodletting in Syria. Despite appearances to the contrary, fighting against the jihadists continues, mainly in Idlib province, where the Syrian army has been unable to achieve a decisive victory. The Russians would like the Americans to withdraw from the last two enclaves where they still have boots on the ground. They would also be happy if the Americans were to ease the sanctions they imposed in 2014, following Russia’s annexation of the Crimean Peninsula.

Behind the scenes, the truly “hot” topic was the tensions between Washington and Tehran. “There is no doubt that after the summit, urgent messages will be conveyed from Moscow to Tehran,” a senior Israeli security source told Al-Monitor on the condition of anonymity. “Before arriving in Jerusalem, Patrushev met with top Iranian officials, and chances are he will do so again afterward.”

The source further stated, “The Russians are very interested in being the responsible adult concerning tensions in the Gulf. Patrushev’s statement and the public backing he gave Iran are intended to boost trust between Moscow and Tehran in a way that can be used to restore calm and to mediate.”

Former Israeli national security adviser Maj. Gen. (res.) Giora Eyland told Al-Monitor that Prime Minister Ehud Olmert had sent him on an urgent mission to Moscow in 2006 when it transpired that a top Iranian national security official was on his way there. Olmert had sought to convey a message to Iran via the Russians and did so. “It is quite plausible that the same thing is happening now that things are boiling in the Gulf, and no one wants this to deteriorate into war,” a former IDF senior officer told Al-Monitor, speaking on the condition of anonymity. “There is currently a shortage of mediators acceptable to all sides. [Russian President Vladimir] Putin may be trying to fill this niche.”

While in Jerusalem, Bolton had remarked, “All that Iran has to do is walk through that open door,” by which he hoped to enhance the negotiations option. A senior Israeli security source who requested anonymity told Al-Monitor, “As far as the Americans are concerned, the fact that President Trump aborted the military strike [against Iran] at the last minute was a gesture of goodwill. Now it’s Iran’s turn.”

Do the Iranians think so? Probably not given President Hassan Rouhani’s June 25 remarks about the “intellectual disability” inside the White House.