US, Israeli, Russian security chiefs to meet in Jerusalem

The upcoming meeting of Israeli, American and Russian national security leaders in Jerusalem is a major diplomatic achievement for the Israelis, particularly their prime minister. 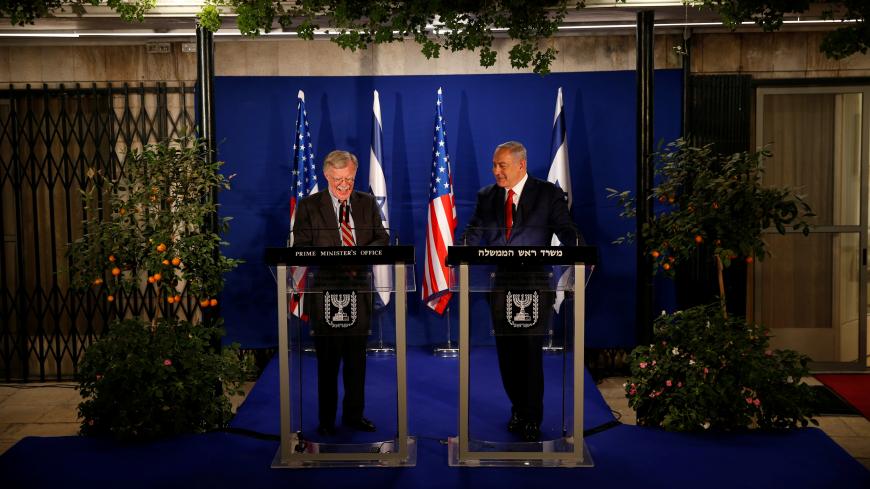 Barring last-minute changes, senior Israeli and American officials will meet in the United States this coming week to prepare for a trilateral summit of the heads of the US, Russian and Israeli national security councils. National security advisers John Bolton, Nikolay Patrushev and Meir Ben-Shabbat will convene June 24 in the Israeli capital to discuss the post-war order in Syria.

“This is a crazy event. I don’t have sufficient superlatives to describe it,” an Israeli defense source told Al-Monitor on condition of anonymity. “It’s true that at this stage, the importance of the event is in the very decision to hold it, but think about it: Fifty-two years after Jerusalem’s liberation, we are bringing together there the heads of the American and Russian security councils to discuss arrangements for Syria after the war, with us as part of the process.” The official got somewhat carried away talking about a “new Sykes-Picot” — referring to the 1916 agreement dividing the region between the British and French colonial powers. Still, there is rare consensus in Israel about the summit being a tremendous achievement for Prime Minister Benjamin Netanyahu and a strategic Israeli message to Iran and the rest of the Middle East that Israel is part of the axis of powers working together to instill a new order in the Middle East.

The upcoming summit is likely to star in Netanyahu’s reelection campaign throughout the summer months ahead of the Sept. 17 vote. For once, he appears to have come by this achievement deservedly. The summit was decided on before Netanyahu knew he would be unable to form a government and would be dragged into new elections, leaving him with an alibi. It was not a pre-election stunt, but Netanyahu will undoubtedly use it to leverage his electoral prospects, as he always does.

There was a glitch in the lead-up to the summit: On June 5, military intelligence head Maj. Gen. Tamir Heyman presented an overview of events in the region at the Israel Heritage and Commemoration Center. “If you are looking for a world leader who speaks to everyone, look no further than the Russian player,” Heyman said, complimenting Russian President Vladimir Putin. “Russia’s dominance in the region is tangible; Russia almost intentionally instigates friction and then seeks to be instrumental in resolving it by its presence in the region.”

The Russians were not pleased with this description. Heyman “simply wanted to compliment the Russians, but it didn’t come out well,” one of his colleagues told Al-Monitor on condition of anonymity. Russia’s military attaché in Israel received a clarification of the remarks. Moscow did not react, further proof of the powerful strategic link emerging between Moscow and Jerusalem. “They realized there was a mistake in formulation,” a senior Israeli source told Al-Monitor on condition of anonymity. Top military brass — national security and planning officials — will probably fly to Moscow in the next few days to prepare for the summit.

Israel views the upcoming summit as a major achievement. “Three years ago, Israel made a strategic decision to prevent Iran’s entrenchment in Syria at any cost,” said a senior military official in a confidential conversation with Al-Monitor. “Chief of Staff [Gadi] Eizenkot received the blessing of the prime minister and the cabinet, and Israeli measures against Iranian entrenchment gradually intensified.” According to this source, quite a few people in Israel and beyond warned that the Israeli strikes were ineffectual, but developments on the ground proved them wrong. “The strikes, which are ongoing, achieved a very positive cumulative effect,” said the senior military official. “They took their toll on the Iranians, their entrenchment shrank, the Iranian presence is declining and a deal has been struck with the Russians to push the Iranians at least 80 kilometers [50 miles] away from the Israeli border on the Golan Heights.”

Israel’s raids in Syria have made Israel an essential strategic element in regulating the situation in Syria. “Something else has happened,” a senior security cabinet source told Al-Monitor on the condition of anonymity. “The Americans announced they were pulling out of Syria, but they did not do so. Now they are forming a tripartite axis together with Russia and Israel for a joint discussion based on mutual interests and focusing on the day after. If this is not a major diplomatic achievement, then there are no major diplomatic achievements in the world.”

The confluence of American, Russian and Israeli interests is particularly intriguing as regards Israel and Russia. “Putin understood a long time ago that without Israel, he will have a hard time stabilizing the situation in Syria,” another cabinet source told Al-Monitor on condition of anonymity. According to various assessments, one possible deal would entail US and Israeli recognition of the regime and a lifting of American sanctions from Damascus. In return, the Russians would have to press President Bashar al-Assad and Iran to bring about an Iranian pullout from Syria.

The feasibility of such a goal is unclear. Russian Foreign Minister Sergey Lavrov said a year ago that any expectation that Russia could get the Iranians out of Syria was “unrealistic.” Nonetheless, Russia has no problem discussing it. The Russians stopped viewing Iran as a strategic partner long ago. The war over Syria has been decided, despite the continued fierce fighting in the Idlib region. Instead of military cooperation, Russia finds itself in an economic and strategic race with Iran over influence in Syria.

“At some point, Assad will also have to decide,” a top Israeli military source told Al-Monitor on condition of anonymity. “Will he continue to be an Iranian stooge and aspire to be [Hamas leader] Ismail Haniyeh when he grows up, or would he rather regain his independence and stand on his own two feet?”

According to this logic, Assad knows the Iranians have done their part and can now leave. If they do, he will rid himself of his Israeli headache and can then apply himself to his country’s rehabilitation with Russian and American help. These considerations will be the focus of the Jerusalem meeting at the end of June. The eyes of the Middle East will be on the get-together, in which Israel will prove how central it has become in the struggle between the two superpowers.