Justice Minister Amir Ohana has the opportunity to engage Israeli Supreme Court justices in a dialogue that could ultimately benefit the entire judicial system, but he might just as well continue to attack the court in ways pleasing to the person who appointed him, Prime Minister Benjamin Netanyahu. 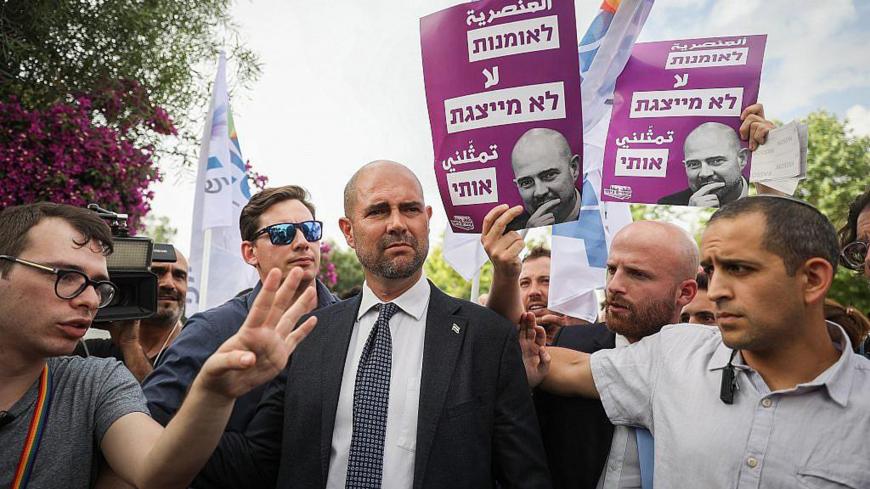 I confess to breathing a sigh of relief when I first learned of Prime Minister Benjamin Netanyahu’s June 5 decision to appoint Knesset member Amir Ohana, a member of his Likud party, as Israel's next justice minister. Knesset member Bezalel Smotrich, the self-proclaimed candidate from the United Right, had said on June 3 that he wanted to take Israel back to the days of King David. Thus, the appointment of Ohana two days later enabled Israel to sound the all-clear siren, for now.

Over the years, Ohana has made his stance toward the Supreme Court clear. We know it to be a negative attitude in a country without a written constitution or a second house of parliament and where the Supreme Court is the only institution that can stand up to the executive and legislative branches. Ohana's perspective is shared by many on the Israeli right who consider the power of the Supreme Court excessive. On the other hand, Ohana has not suggested turning Israel into a country governed by Jewish religious law. That alone makes him preferable to Smotrich.

Ohana undoubtedly belongs to the school of thought that cannot understand how a particular group of unelected people — a Council of Sages, in his words — can be allowed to impose limits on duly elected officials. At one point, he went so far as to assert that Israel was nothing less than a “dictatorship of the Supreme Court.” It would therefore be for the best if someone who holds such a position as well as the reins of the Justice Ministry were to leave office after elections in September. I hope the voting results make such an outcome inevitable. Until then, however, there are a few signs that the damage Ohana might be able to do is limited.

Upon being sworn in to the Knesset in December 2015, Ohana made a point of describing himself as “a Jew, an Israeli, a Mizrahi [of Middle Eastern origins], a gay, a Likudnik, a security hawk, a liberal and a supporter of the free market.” Unlike Knesset member Moti Yogev of HaBayit HaYehudi, Ohana has never insinuated that he wants to take a bulldozer to the Supreme Court building. Furthermore, he is a lawyer, so one can safely assume that he has no such plans. As a gay man, he is well aware of how much the LGBT community owes to Supreme Court rulings, without which Israel would not have recognized same-sex marriages conducted overseas and would not legally acknowledge the children he and his partner adopted overseas because they are a gay couple. There is not a chance that a majority of the Knesset — whose members are elected, unlike judges — would allow such.

As justice minister, Ohana will soon learn that the one person with real power in his office is the attorney general. That’s the way it should be. The minister can certainly try to implement various organizational reforms, but that takes time, and time is one luxury that Ohana will not have. The one area where he could have the most influence is legislation, but in this particular instance, he will find himself with nothing to do, because the Knesset will not be legislating until a new one is sworn in. This means that the Ministerial Committee for Legislation, which he is supposed to head, will not be operative.

When it comes to the one area of real importance to the prime minister — the criminal cases and indictments against him — there is a Great Wall of China separating the justice minister from the State Prosecutor’s Office and the attorney general. As a result, Ohana will have no idea what's going on. When he express his opinions to the media about the process, it will be while knowing about as much as he knows today as a Knesset backbencher. Even if Ohana shows up with the stern expression of someone who knows what he's talking about, he cannot share what he knows with his audience.

On the other hand, this is a golden opportunity for Ohana to familiarize himself with the many systems that fall under the authority of the Justice Ministry. He can try to suggest various changes, many in the name of efficiency, and he can listen to ministry veterans, paying heed to their recommendations and criticisms. He can also consider advancing positions that Israel long committed itself to but has never gotten around to fulfilling.

One of these is establishing an office of a commissioner for human rights, an institution that exists in many enlightened states but not in Israel. Ohana could also reconsider ideas like partnership agreements, instead of civil marriage, since the latter is currently impossible due to the adamant opposition of the religious parties. It would be well worth his while to flip through the file of international treaties that Israel theoretically supports but never officially confirmed and is thus not obliged to abide by. These include the Chemical Weapons Convention and the Ottawa Convention (banning the use, storage, manufacture and transport of landmines). There's also the Rome Statute (establishing the International Criminal Court), a convention that Israel helped initiate.

It is likely the new justice minister already has a meeting scheduled with the president of the Supreme Court, but he should probably go a step further. It would be well worth his while to devote a few hours to meeting with all the justices on the court. They would be glad to have such a meeting, and it would be a great experience for him and a chance for him to lay out his views on the relationship between the judicial and executive branches, explain his support for the override clause (which would grant the Knesset the ability to overturn Supreme Court decisions repealing legislation and government decisions) and expound on the new kind of relationships he would like to see among the branches of the government.

As the justices reveal the differences of opinion among themselves, Ohana will reach the inevitable conclusion that not all judges are cut from the same cloth. In fact, these differences could help him better understand that the court consists of people who treat their rulings with reverence, yet who are also aware that they can make mistakes. He will see that the justices recognize that they are more than just bureaucrats charged with interpreting the law. Rather, they are charged with acting justly toward those who contend that they have suffered an injustice.

Engaging the justices in a dialogue on the court and its approach to the law would allow Ohana to suggest changes to benefit the judicial system as a whole, even if he hasn’t yet thought about it. In fact, he might not have thought about such changes because it’s much easier for him to come up with slogans that please the prime minister and his family.

Ohana will prove himself to be little more than a doormat if he continues to meet the prime minister’s expectations with more attacks on the gatekeepers (especially now from his position as minister of justice), if he denigrates the Supreme Court, if he claims the state prosecutor has a political or personal agenda against the prime minister, and if he supports a decision by Netanyahu to continue serving as prime minister during his trial (should there be one). In such a case, the fact that Ohana once served as justice minister will ultimately be nothing more than a line on his resume. If, however, he manages to shape his own approach to his new position after getting better acquainted with the system — an approach that need not bring him into conflict with the person who appointed him — he could be a true minister of justice.