Iraq's legislature is mulling over a bill that would change the makeup of the country's top court to include Islamic scholars, stirring controversy over how much influence they should have. 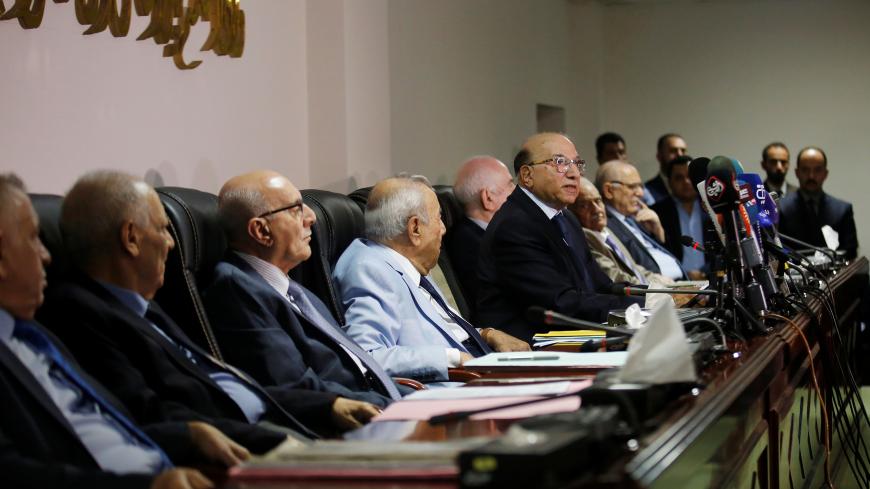 Iraq's parliament is working on a draft law that could put clerics on the Federal Supreme Court and give them veto power.

The legislature held its second reading of a draft law regarding the Federal Supreme Court on June 13, amid heated disputes over most of the proposed articles, particularly those providing for the appointment of clerics to the court and the entity responsible for their selection.

The court currently is regulated by a law issued by an interim government in 2005 and contradicts several articles of the permanent constitution approved at the end of that year.

Most notably, Article 92 of the constitution specifies, “The Federal Supreme Court is an independent judicial body, financially and administratively.” The court, however, is headed by the president of the Supreme Judicial Council, who also selects its judges.

Under the draft law, the court would be composed of a president, his deputy and 11 members, four of them Islamic scholars with veto power. All the members would be approved by "the three presidencies" — the president of the republic, the prime minister and the parliament speaker.

The parliamentary blocs reject the proposal; they believe parliament should exclusively hold the power to approve these members.

The Kurdish blocs want to be represented on the court by two Kurdish members, as the court’s power extends over the entire country, including the autonomous Kurdistan region.

Furthermore, the draft law would set the term of Federal Supreme Court members at 12 years. A quorum would require the presence of two-thirds of the members. The draft also would restrict the right to submit a request of interpretation of constitutional texts to the heads of the executive, federal and local authorities and the parliament speaker.

Meanwhile, the parliamentary Legal Committee proposed setting the term at only nine years and granting the remaining state institutions the right to request the interpretation of constitutional texts.

Perhaps the most important dispute about the draft law is the interpretation of Article 92 of the constitution. Under this article, the membership of the Federal Supreme Court includes scholars of Islamic jurisprudence. Islamic blocs believe the appointment of these scholars is mandatory, while civil powers argue that the constitution sought their appointment only on an advisory basis.

Appointing clerics to the highest judicial authority will lead to disputes over who should choose them and what body they represent, especially in a multireligious country such as Iraq. There are also fears that the court could turn into a supreme religious authority, as clerics could block any decision it might make otherwise.

Al-Monitor spoke to Ribawar Hadi, head of the Legal Committee, who pegged the most controversial issues of the draft law as "the appointment of judges of the Federal [Supreme] Court, the selection of Islamic scholars, in addition to decision-making and voting methods within this court." He added, "The Kurdish blocs demanded that the president of the [Kurdistan Regional Government (KRG)] take part in the selection of judges on the grounds that the court is competent to examine the contentious issues between the KRG and the central government.”

Hadi explained, “Fears of Islamization of the judiciary in the country stem from Article 92 of the constitution, which provided for including scholars in Islamic jurisprudence as members of the Federal Supreme Court. The dispute now is whether their role should be advisory or they should be entitled to vote on all decisions.”

However, the Iraqi civil movement’s fear of Islamization comes in tandem with fears of including the Federal Supreme Court under the sectarian and ethnic quota system applied in the country since 2003. This could turn the judiciary into a bone of contention rather than a tool for resolving the numerous disputes in the country.

According to civil movement parliamentarian Raed Fahmi, the constitution does not bestow the right to vote to Islamic scholars. He told Al-Monitor, “The law on the Federal Supreme Court is the most important constitutive law in the Iraqi state. Including this court in the sectarian quota system would mean creating a system opposed to the principles of democracy.”

Fahmi pointed to several potential changes to the draft law, including one that says the president of the Supreme Federal Court and his deputy and judges "may be elected by judges of the judiciary or the judges of the first category [the highest-ranking judges] instead of being selected by the three presidencies or parliament.”

In contrast, Islamic blocs insist on Sharia scholars' presence on the court, provided that judges are selected by parliament. Ammar Tohma, a parliament member for the Islamic Virtue Party, explained in a June 13 statement the reasons why his bloc opposes the draft law: “The draft law combines the presidencies of the Supreme Federal Court and the Supreme Judicial Council. It also requires for a quorum the presence of two-thirds of the members, which may impede the issuance of verdicts. We propose a quorum of an absolute majority and the approval of three-quarters of Islamic jurisprudence scholars from among the court members on any constitutional decision issued by the court."

Amid the numerous disputes, some political parties in the country expect a delay of the draft's third and final reading. This draft law is a sensitive matter as it confers to the court several important powers, including those of interpreting constitutional texts, supervising the implementation of laws, and settling disputes between local governments and the federal government.

Of note, the Iraqi system of consensus and quotas has failed in passing numerous other laws, such as the draft laws on constitutional amendments, the federal service, the federation council, oil and gas, the national flag and the emblem and anthem. The disputes over these issues reflect a crisis in the structure of the political system and a conflict between the civil, national and Islamic political movements on changing this system to achieve their respective goals.

If passed as is, the Federal Supreme Court draft law would further entrench the constant pressure of these political parties on the Iraqi judiciary.

If these authorities — who already assume presidencies and parliament seats — are allowed to appoint the judges of the highest court in the country for 12-year terms, the authorities will be managing the court for three legislative sessions to come.