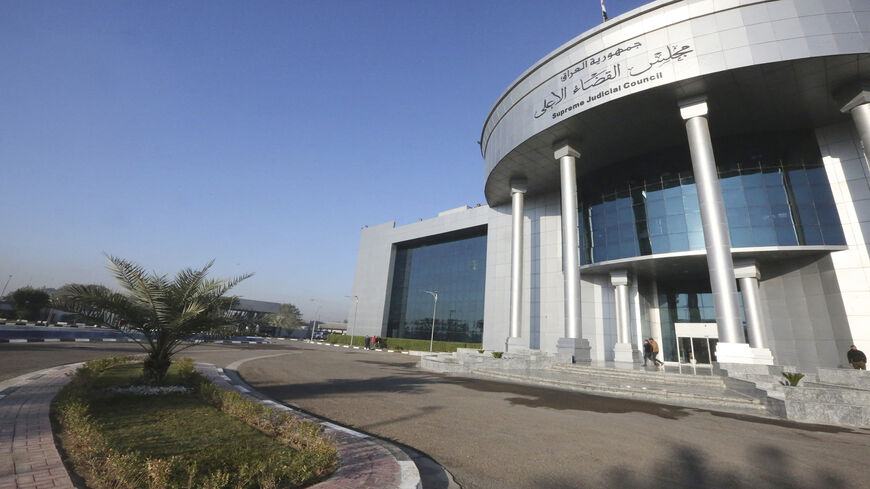 Iraq's federal court ruled March 2 that the formation of the Anti-Corruption Committee formed by the Iraqi prime minister in mid-2020 is unconstitutional, and therefore it should be dissolved.

The committee that was headed by Lt. Gen. Ahmed Abu Ragheef focused on high corruption and terrorism cases. It had arrested 36 suspects, of whom 16 received legal sentences by the relevant courts.

Among the suspects was the killer of Hisham al-Hashemi, a prominent anti-terrorism researcher, who was shot dead on July, 6, 2020, by Ahmed Hamdawi Owaiedan, an affiliated member of Kataib Hezbollah. He was supposed to hear his sentence last week, but the court postponed the decision. Meanwhile, his father had filed a complaint to the federal court against the committee, claiming its formation and rulings are not legal. The court ruled in favor of Hamdawi Owaiedan's father.

This is not first time that the judiciary interfered in political cases.

Last year, a court in Baghdad ordered to release prominent militia commander Qasem Muslih, who was arrested by the Abu Ragheef Committee and accused of killing an activist in Karbala. The release took place after militias entered the Green Zone in order to put pressure on the government to release Muslih.

In another incident last week, a judge at al-Karkh court in Baghdad had ordered to move a suspect of using illegal drones to another security institution in order to facilitate his release, similar to what happened with Muslih. However, special forces from the counterterrorism unit surrounded the court and moved the suspect to the Anti-Corruption Committee.

On Feb. 24, Iraq's Supreme Judicial Council called on Prime Minister Mustafa al-Kadhimi, who is also the chief commander of the armed forces, to investigate the case where a military force besieged the Court of Appeal in al-Karkh.

A security source told Al-Monitor, “Influential parties tried to smuggle one of the defendants out of the Court of Appeal in al-Karkh. This person is accused of having targeted the prime minister’s home Nov. 7. That prompted the prime minister to dispatch a security force to protect the court.”

Amid sharp political differences between the conflicting Iraqi forces, the federal court plays a prominent role in resolving legal disputes over elections and other matters among political forces, figures or parliamentarians.

On Dec. 28, the federal court rejected the appeal to annul the elections results, which Fatah Alliance leader Hadi al-Amiri submitted.

On Jan. 25, member of parliament Bassem Khashan submitted the appeal to the federal court, challenging the constitutionality of the first parliamentary session.

On Feb. 18, leading KDP figure Hoshyar Zebari said that the federal court’s ruling invalidating his candidacy to the post of president was “unjust and politicized.”

Speaking to Al-Monitor, Ali al-Tamimi, former judge and legal expert, said, “It has become commonplace now that whoever loses a lawsuit in the federal court accuses the court of being biased.”

He noted, “The federal court bases its verdicts on evidence. There is a plaintiff and a defendant, and there are nine judges who have spent their lives serving, which bolsters their independence in issuing decisions in accordance with the constitutional provisions.”

Razzak Hamed al-Awadi, lawyer and legal researcher, told Al-Monitor, “The federal court is an independent body in accordance with Article 87 and Article 92 of the constitution. The Supreme Judicial Council nominates its members based on their competence, service and integrity.”

He said, however, “Some constitutional articles go against the judiciary's independence, including Article 61-5, on the appointment of the Court of Cassation’s president and members, which requires a two-third majority of parliamentary votes, as well as Article 61-6, on the questioning of the president of the republic, which requires an absolute majority of members of parliament, thus contradicting Article 94 of the constitution.”

Some speak about the overlap between the law and politics in Iraq, criticizing the federal court for issuing politicized decisions.

Member of parliament Ahmed al-Jabouri told Al-Monitor, “The dissolved Iraqi parliament enacted laws based on a political mood that contradicts the spirit of the constitution and the laws in force, at a time when the federal court was paralyzed due to lack of quorum.”

Jabouri added, “The laws that were enacted in the absence of the federal court involved many constitutional and pro-forma violations, especially the parliamentary Elections Law. It is very clear that parliament, for instance, meddled in the work of the executive branch and electoral commission when it divided electoral districts based on consensual proposals among the blocs.”

Mahmoud al-Hashemi, researcher at the Union Research Center in Baghdad, told Al-Monitor, “The federal court has been subjected to criticism due its performance, not because its judges are incompetent. The problem lies in the Iraqi Constitution, which involves many legal gaps that make the text subject to many interpretations. Also, the political class in Iraq does not have the culture of accepting decisions that are not in line with their orientations.”

He said, “The ruling parties are pressuring the judicial institution. The most dangerous part is that the judiciary is also subject to a quota system among political parties.”

Abdul Qader al-Nayel, political researcher and member of the Iraqi National Charter, told Al-Monitor, “The federal court is the outcome of political consensus between the parties. Its inception is therefore made on political, not legal grounds.”

He noted, “There is no need in Iraq for an institution similar to Iran’s Expediency Discernment Council, particularly since there are already relevant courts that examine legal cases in the judicial system, including the administrative court.”

Nayel added, “The Supreme Court issued decisions that were biased toward particular political parties at the expense of others. It was clear that they were politicized, because they were not based on justice but rather on selectivity, which reflects its political struggle and that they are far from being professional.”

However, according to some political analyses, the federal court should remain in place, because it consists of the last buffer against the attempts by a particular party to monopolize the judicial decision.

Member of parliament Alia Nassif told Al-Monitor, “There are interferences and abuses targeting the judicial institutions.” She called for “distancing them from politics and pressure from any of the parties.”

The fact that parties, parliamentarians and political figures resorted to the federal court to resolve disputes related to elections, parliament sessions and government formation causes this court to be in direct contact with the political issues, and to be subject to ensuing pressure. This judicial institution should remain independent, strict and accurate in settling files in order to remain trusted by all parties, otherwise the Iraqis will have absolutely no confidence in the judiciary.