The Iraqi judiciary issued arrest warrants and travel bans against key Sadrist movement leaders amid violent political conflicts, but their enforcement could be a sensitive task. 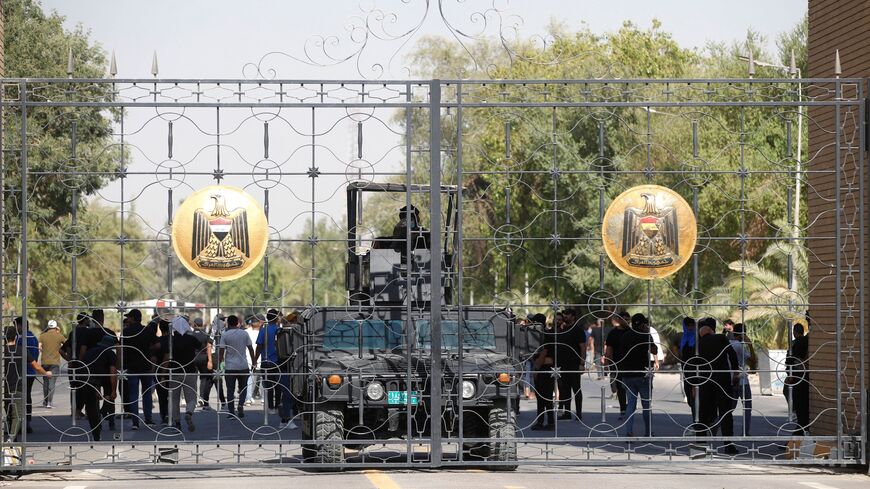 Iraqi police are pictured standing guard at the closed gate of the government headquarters in Baghdad's Green Zone, on Aug. 29, 2022. Dozens of angry supporters of the powerful cleric stormed the Republican Palace, a security source said, shortly after Sadr said he was quitting politics. - AHMAD AL-RUBAYE/AFP via Getty Images

Arrest warrants have been issued for a number of Sadrist leaders after supporters of top Iraqi Shiite cleric Muqtada al-Sadr stormed the judiciary's headquarters in Baghdad last week.

The Karkh Investigation Court in Baghdad issued Aug. 23 an arrest warrant for Sabah Al-Saadi for the crime of threatening the Iraqi judiciary, along with other arrest warrants for senior aides to Sadr.

The move was denounced in a sit-in by Sadr’s followers in front of the headquarters of the Supreme Judicial Council in the Green Zone. The protesters withdrew later that day on Sadr’s demand.

The United Nations Assistance Mission for Iraq (UNAMI) and political forces condemned the sit-in. Iraqi Prime Minister Mustafa al-Kadhimi cut short his visit to Egypt, warned against disrupting the work of the judicial institution and called for dialogue.

But on Aug. 25, the Sadrist movement renewed its protest against the judiciary. A prominent Sadrist figure lashed out at the judiciary, accusing it of overlooking corruption “out of fear and greed” and of “applying the law to the poor and young only.”

On Aug. 29, Sadr announced that he was retiring from politics, prompting supporters to storm the Green Zone. At least two protestors were killed and 20 injured when security forces fired on them inside the Green Zone.

Sadr's followers believe the judiciary had refrained from issuing orders to dissolve parliament, a key demand for the movement since the withdrawal of its parliamentary bloc from the legislature on June 25.

The Supreme Judicial Council argued on Aug. 14 that it lacked authority to dissolve parliament, calling on all political parties not to involve it in their rivalries and political bickering.

Tamimi indicated that Article 198 punishes by a term of imprisonment not exceeding 10 years any person who incites the commission of an offense against public properties. He further noted that the arrest warrants were also issued under Article 226 on the punishment for insulting judicial authorities.

“The warrants included a travel ban and seizure of assets,” he said. “Such arrest warrants must be made based on a complaint or at the request of the Public Prosecution, as is the case of the arrest warrants against Sadrist leaders. These warrants are enforceable, and those who are not arrested must be tried in absentia. However, it could be difficult to enforce these orders due to the serious political repercussions they may entail.”

For his part, leader of the Sadrist movement Riyad al-Masoudi told Al-Monitor, "The Sadrist movement is the first to respond to any violation of the principle of separation of powers, especially the attempt to marginalize the independence of the judiciary. However, the Iraqi judiciary has failed to address cases of corruption, and it has become a political tool. The protests staged by Iraq's pro-Iran Coordination Framework were brandishing the photos of the head of the Supreme Judicial Council, Faiq Zaidan. This is proof of the politicization of the judiciary, which is supposed to steer clear of political rivalries.”

Since the October 2021 parliamentary elections, Iraq has witnessed a political struggle over the government formation between the Sadrist movement and Coordination Framework forces who want to keep the movement away from the Cabinet.

Mahmoud al-Hashemi, a researcher at the Union Research Center in Baghdad, told Al-Monitor, “The judiciary is the basic pillar of any rule, and the force of law expresses the identity of the nation and its civilization. The issuance of arrest warrants by the judiciary against supporters of the Sadrist movement who blockaded the Judicial Council building is in line with the applicable laws and regulations in the Penal Code that apply to everyone. Laws may not be applied to a specific group of persons only. The leaders of the Sadrist [movement] must be aware that everyone has to accept the judicial decisions in order to prevent chaos.”

He added, “Respecting each authority and its impartiality allows resolving political crises. Leaders must cooperate with the judiciary with professionalism and respect; otherwise, the concept of the state would be undermined.”

Meanwhile, political analyst Hassanein Ali al-Saaedi, head of the Kafaat Studies Center, told Al-Monitor, "The lack of serious execution of the arrest warrants for the leaders of the Sadrist movement could be a political pressure card. If these warrants were serious, the Federal Court would have asked the government to enforce them.”

He explained that "issuing these warrants will further encourage the Sadrist movement's supporters to achieve their goals. They have become certain that issuing arrest warrants at this speed means that the Coordination Framework is manipulating the judiciary. These warrants are likely to worsen the political deadlock and trigger an escalated reaction among the public and Sadrists.”

Fadel Abu Ragheef, a security analyst and an expert at the Development Research Center, told Al-Monitor, “The judiciary will take into account the political circumstances and the conflict between the parties, because it is well aware that enforcing the warrants will generate major problems.”

These accusations against the Iraqi judiciary are not new. It has previously been accused of failing to address the cases of the victims of the protests and abuses of freedom of expression, and ignoring serious corruption cases. The turbulent situation in Iraq and the possibility of it spiraling into chaos could jeopardize the judiciary.