Sadrist protesters stormed the Judiciary this morning, raising concerns over stability in Iraq. 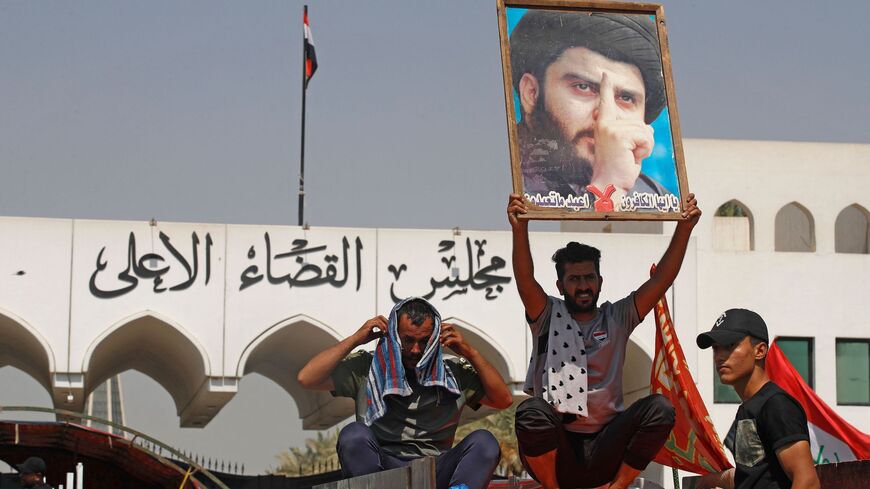 A supporter of Iraqi Muslim Shiite cleric Muqtada al-Sadr raises his portrait during a protest outside the headquarters of the Supreme Judicial Council, Iraq's highest judicial body, in Baghdad on Aug. 23, 2022. - AHMAD AL-RUBAYE/AFP via Getty Images

Hundreds of Sadrist protesters stormed Iraq's Judicial Council building this morning and set out tents to organize a sit-in. They stormed the parliament building last month and held a sit-in there as well.

Muhammad Salih al-Iraqi — who closely follows Muqtada al-Sadr on Twitter and whose tweets express official Sadrist positions — welcomed the move against the Judiciary, accusing it of being biased against Sadrists.

Sadrists won the largest bloc in the last elections but failed to form a government due to a series of rulings by the Judiciary.

It seems that they want the Judiciary to amend these rulings before new elections are held so that they can form a government next time.

The Judiciary Council issued a statement saying that it had suspended its work until further announcement.

“The Judicial Council will suspend all court sessions under its authority as a protest against these unconstitutional behaviors and will hold the government and political parties that are backing this move fully responsible for all the results,” the statement read.

Iraqi Prime Minister Mustafa al-Kadhimi, who was on a trip to Egypt to participate in an Arab summit, immediately cut short his visit and returned to Baghdad.

“The prime minister warned that disrupting the work of the judicial institution exposes the country to serious risks, stressing that the right to demonstrate is guaranteed in accordance with the constitution, stressing the need to respect state institutions to continue their work in the service of the people,” Kadhmi said in a statement upon his return to Baghdad.

Kadhimi also “called for an immediate meeting of the leaders of the political parties to activate the national dialogue procedures and defuse the crisis.”

The US Embassy in Baghdad expressed concern over the "unrest in Baghdad today at the Supreme Judicial Council" and urged "all parties to remain calm, abstain from violence and resolve any political differences through a peaceful process guided by the Iraqi Constitution.

The United Nations Assistance Mission for Iraq also criticized the move against the Judiciary and told protesters that the “state institutions must operate unimpeded in service of the Iraqi people, including the SJC.”

Upon his arrival, Kadhimi met head of the Badr Organization and prominent leader of the Coordination Framework Hadi al-Amiri.

They discussed the prime minister's initiative for national dialogue and how to revive it under the recent escalation.

Following the abovementioned statements and positions by national and international figures and parties, Sadr ordered his followers to withdraw from the Judiciary building; some tents were left behind as a sign of protest against the politicization of the Judiciary.

Soon after, the Judiciary Council said it was returning to its normal work schedule.

The Coordination Framework, which is the rival Shiite group against Sadr, also issued a strong statement calling for the protection of state institutions and rejecting any kind of assault against them.

What raised more concerns, however, was a statement issued by the Popular Mobilization Units (PMU) — which has some some political parties affiliated with the Coordination Framework — accusing the government of not taking responsibility in protecting state institutions and expressing readiness to protect the state.

“As the Popular Mobilization Authority declares its readiness to defend state institutions that guarantee the interests of the people, foremost of which is the judicial and legislative authority, the political system and the constitution, it calls on the caretaker government to take responsibility, and seriously, in protecting the constitutional state institutions,” the statement read.

“We pledge to our people that we will remain defenders of them and their security and that we will be with our brothers from the armed forces to protect the constitutional democratic system for which we have sacrificed precious blood,” it added.

What is concerning is that the PMU is a state-security force that is obliged to the prime minister, who is the commander chief of the security forces. So it is not acceptable that a state force take action against its commander in chief.

These all indicate that the two Shiite rival groups, the Sadrists and the Coordination Framework, which both have social bases and armed factions, are moving forward in a confrontation that — if started — will be very difficult to stop.