Iraqi judges in crosshairs of drug dealers with powerful connections

Iraq has seen systematic assassinations of judges since 2003, most of whom were handling investigations into drugs and corruption cases involving influential figures and parties. 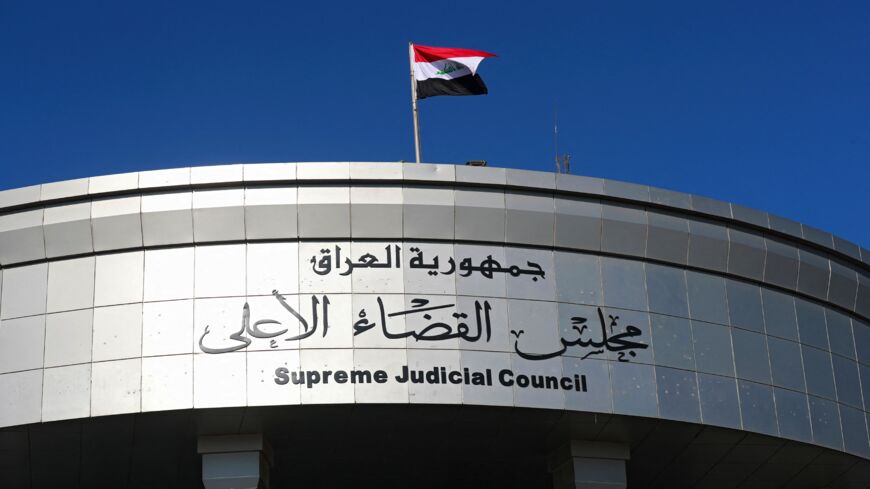 Iraq's judges are facing death threats and some have been assassinated. On Feb. 5, a judge looking into drug cases was shot dead by gunmen in the city of al-Amarah in southern Iraq.

This prompted the head of the Supreme Judicial Council, Judge Faiq Zaidan, to pay a visit on Feb. 7 to the governorate to meet with other judges, calling for “urgent measures to be taken to strengthen the security situation.”

According to statistics published on Feb. 11, 74 judges have been killed in Iraq since 2003. All of them were assigned to corruption, terrorism and drug cases.

The seriousness of threats facing judges prompted Iraqi Prime Minister Mustafa al-Kadhimi on Feb. 15 to give instructions on the need to provide the necessary protection for magistrates.

Rahim al-Okaili, a judge and former head of parliament’s Integrity Committee, told Al-Monitor, “The assassinations targeting judges since 2003 are nothing like Iraq had witnessed before,” adding that “in a few cases only the perpetrators were exposed and held accountable for their crimes.”

“Terrorism and sectarian assassinations were mostly behind the killing of judges before 2010. Today, however, it seems that organized crime groups, influential parties and armed groups are joining hands to get it done,” he said.

Jamal al-Asadi, a security expert and former inspector general in the Iraqi Interior Ministry, told Al-Monitor, “Providing sufficient guarantees for judges to protect their security and keep their decisions at bay from political and criminal interference or any other forms of pressure is necessary to protect communities.”

“The number of judges in Iraq is not commensurate with the responsibilities placed on them or with the international standard that measures the number of judges in relation to the population at a rate of seven judges per 100,000 people. This means that Iraq needs to have 2,800 judges, excluding public prosecutors, while the country has 1,600 magistrates and one prosecutor,” Asadi explained.

He said that “losing a judge is a great loss. Judges put a lot of effort in education and training to get where they are today.”

Riad al-Masoudi, a leader of the Sadrist movement, told Al-Monitor, “Article 87 in the third chapter stipulates that the judiciary is an independent authority.”

“Some political forces are aware that the judiciary is a strong and independent body, so they try to undermine it by stirring mistrust, suspicion and pressure. The judiciary handles serious cases, which is why courts and judges are not at the forefront. The executive branch represented by the government, namely the Interior Ministry and its security apparatus, should be the first line of defense to protect the attack on judges,” he added.

“The political forces seek to have representatives in the judicial body, which is, so far, relatively at bay from political interference. This is why some politicians have threatened the judiciary and judges," Masoudi said.

Fadel Abu Ragheef, a security expert in the Development Research Center, told Al-Monitor, “Judges played a major role in issuing arrest warrants against terrorist leaders, which turned them into targets.”

“The judiciary supported Kadhimi’s efforts to combat corruption and issued arrest warrants against defendants in major corruption cases, which made them the target for the corrupt and powerful forces behind these crimes.”

Jawad al-Hindawi, the head of the Arab Center for Policies and Capacity Enhancement, told Al-Monitor, “Iraq is currently witnessing a proper booster of the judiciary role, especially the Federal Supreme Court. But this is where things collide. While the judiciary is seeking to impose justice, the rule of law, the respect of the constitution, the fight against corruption and sabotage, some external and internal forces are keen on maintaining a state of instability, crimes and the undermining of the state’s foundations.”

Ali al-Tamimi, a legal expert and former judge, told Al-Monitor, “The solution lies in security forces providing protection for judges until the judiciary is fully independent. Failing this, judges won’t be able to carry out their missions.”

Ihsan al-Shammari, a professor of political science and head of the Center for Political Thinking, told Al-Monitor, “The repeated targeting of judges is the result of the lack of the state’s deterrent action against armed groups.”

He spoke of the “rise of major mafias in the Iraqi state, which have grown even more powerful due to the lack of prosecution. The alliance between these mafias and tribes will only mean more targeting of judges and the security establishments.”

Shammari added that there is “a struggle for influence over weapons and drugs, with every group being supported by a powerful party which would perpetuate the conflict. Any decision to prosecute the criminals would push the mafias into retaliatory actions, with assassinations of the concerned judges and investigation officers.”

According to information Shammari claims is from official sources, “The mafias and groups targeting the judges are linked to foreign parties.”

Judge Iyad Mohsen Damad said in a Facebook post, “The security and intelligence services bear the full responsibility in providing the necessary protection for judges and preventing any attack on them.”

While there are reports that the Supreme Judicial Council and senior judges in Iraq are relatively well protected from attacks, they still face political peril when it comes to their stances or temptations to issue politicized rulings.

It is necessary for the judiciary to remain distanced from political motivations and not allow political forces to control it while working on providing full protection to judges so they can achieve justice.

Corruption and nepotism
Courts and the law
Terrorism