29 things you need to know about Egypt’s draft constitution

A primer on some of the noteworthy points ahead of the referendum scheduled for January 2014. 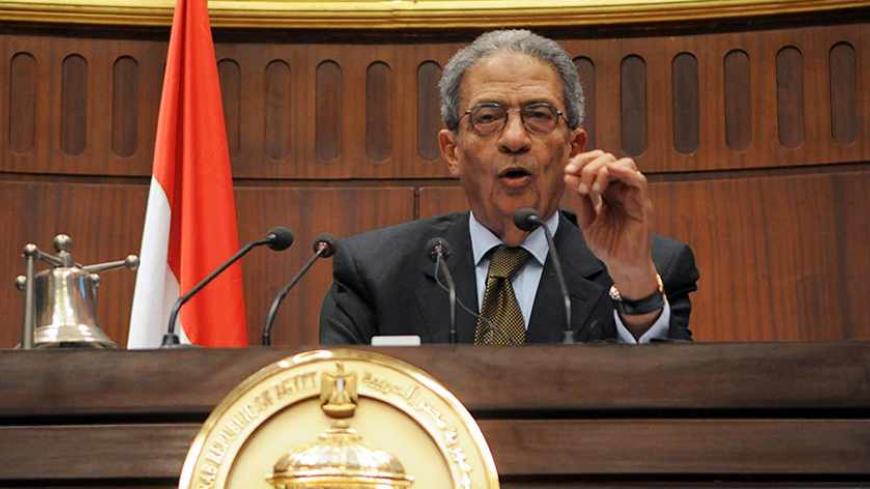 Amr Moussa, head of the assembly writing Egypt's new constitution, speaks after the vote at the Shura Council in Cairo, Dec. 1, 2013. - REUTERS/Stringer

Earlier this week, Egypt’s Committee of 50, its Constituent Assembly charged with amending the suspended 2012 constitution, finished its work and submitted its draft constitution to interim President Adly Mansour for his eventual adoption and holding of a national referendum. This referendum, assuming the draft remains as is and is not amended once more (a difficult possibility), is set for the middle of January 2014. The draft’s contents have been a cause for both applause and criticism. Obviously, there is a lot to cover regarding the charter, and perhaps here is not the space to be fully comprehensive or detailed.

Instead, here is a brief look at some of the main features of this newly proposed charter (Note that this article might be updated with any important points deemed necessary):

Preamble: The introduction to the charter has some noteworthy points. First, it refers to to the “January 25-June 30 revolution,” putting the two uprisings together as one continuous revolution. There has been debate in Egypt between whether the uprising that began June 30 is considered a separate “revolution” from Jan. 25 rather than “another wave of the revolution,” and some of the more politically conservative even see it as a correction of what Jan. 25 had supposedly “ruined.” It also links the “January 25-June 30 revolution” to a host of widely recognized Egyptian uprisings and popular movement from the 19th century onward, and explicitly celebrates the military’s support of the “sweeping popular will of J25-J30.” Another interesting note is a reference to the constitutional court’s body of interpretations of the “principles of Sharia” mentioned in Article 2 as the “primary source of legislation.” This was a compromise made with the Salafis, who necessitated some official interpretation of what these “principles” meant in exchange for dropping the controversial Article 219 of the 2012 charter. The court’s interpretations of the “principles” are predominantly understood to mean “those rulings of Islam that are of definite proof and meaning.”

Religion and minorities: Article 3 remains, explicitly mentioning the principles of the religious laws of Egyptian Christians and Jews as their primary source of legislation on personal status issues. And while the constitution specifically allows for complete freedom of religion (making it “absolute” as it was in 1971 rather than “protected” as was in 2012), it still retains the right of public religious practice and to build houses of worship only for Christians and Jews. The secular leaning members of the assembly apparently saw that changing this article to be more inclusive would have little practical value in Egypt and could cause a lot of political backlash against the draft document in a conservative country, and ceded the debate with the Salafis and Al-Azhar.

Azhar: The article on Al-Azhar has been moved down to Article 7, and while it still proclaims Al-Azhar as independent and the primary source of Islamic jurisprudential sciences as well as obliging the state to provide it with financial support, it nonetheless removes the controversial 2012 stipulation that its opinion is to be considered on matters pertaining to Sharia, which some critics worried would represent a form of gradual backdoor theocracy.

Gender equality: Article 11 is generally seen as an improvement over the stipulations in the 2012 constitution, providing more explicit and detailed calls upon the state to make sure women are not discriminated against in jobs or politically (though no female quota in parliament ever made it to the draft), and to provide support for women in vulnerable circumstances. Some feminist groups had called for a stronger article, but the majority seem to see it as an improvement and as adequate.

Labor: The draft abolishes the stipulation, present since Nasser, that parliament be comprised of at least of 50% workers and farmers. The stipulation was criticized for being abused in practicality by land owners and non-workers entering parliament as such. Instead, the current constitution calls upon the state to ensure “suitable” representation in the upcoming parliament for workers and farmers. Article 13 also calls upon the state to protect workers’ rights, improve working conditions and safety and forbids arbitrary firing of workers. Article 17 says the state has to provide suitable pension for small farmers, agricultural labor, fishermen and impermanent labor. One unchanged criticized stipulation, as per current Article 77, is that there can only be one labor union per profession, which was criticized in previous texts.

Healthcare: The draft elaborates on the rights mentioned in the 2012 constitution. For example, Article 18 now more explicitly says the state should provide health insurance “for all Egyptians that covers all diseases.” It now specifically says that the government expenditure on healthcare should be no less than 3% of gross national product (GNP) — not of the budget — rather than leaving the amount open as before.

Education: Article 19 further enumerates on the right to education and adds new references to education instilling ideals of “equal citizenship, tolerance and nondiscrimination” as well as “national identity.” Education remains free in public education institutions. It also specifically says the state should spend no less than 4% of GNP on education. Article 21 similarly sets a minimum of 2% of GNP for higher education expenditure, and a separate 1% for scientific research.

Culture: The draft introduces a new chapter (a chapter is a part of section in the constitution, the Arabic word for section being bab, meaning “door” or “gate”) on culture, which now becomes a “right” the state should promote. The chapter provides more specific protections on cultural and archeological heritage, celebrated and protected with its various civilizational sources (which are further named in Article 50).

Torture: Article 52 specifically criminalizes torture. Before, Article 36 of the 2012 constitution criminalized torture within the framework of protecting the wider set of rights of all detainees. There are little obvious practical ramifications as far as I could tell beyond the political symbolism.

Nondiscrimination: Article 53 provides more elaborate condemnation of discrimination and criminalizes it while also criminalizing “incitement to hatred.” The article calls upon the state to take strong measures to end discrimination, including setting up a special independent commission on the matter.

Right to remain silent: Pertaining to detainees, this is introduced for the first time in Article 55.

Organ donation: Article 61 introduces specific language on organ donation, stating the right of a person to donate organs during his or her lifetime or posthumously. It als suggests that the state create a regulating mechanism.

Arts and literature: New stipulations on the protection and promotion of the freedom of literary and artistic creation bans jail sentences in crimes related to such forms of expression except potentially if the laws sees fit to do so only in matters pertaining to incitement to violence, discrimination or slander.

Impartiality of state-owned media: Article 72 introduces more clear and direct language (than Article 216/2012) in calling upon the state to ensure the “independence” of state-owned media outlets in a manner that promotes their “neutrality,” equal representation and transmission of various public thought, social and political currents.

Political parties and discrimination: The ban listed in the 1971 constitution on parties with a religious foundation or reference or discriminating on the basis of “gender or origin” is returned to Article 74. Also banned are parties that are founded upon “sectarian or geographic bases, the practice of activities that are against democratic principles, secret nature, military or paramilitary nature.”

Random housing: Article 79, dealing with the right to housing, includes some improvement to Article 68/2012, including urging the state to have a clear national plan to fight random housing (a very dangerous and widespread phenomenon in Egypt) within a fixed time frame.

Further protections: For new groups, such as the elderly (Article 83), dwarves (Article 81), Article 89 further elaborates on the former Article 72/2012, banning more explicitly slavery and other forms of abuse.

International treaties: Article 93 says the state has to abide by all international human rights conventions, treaties and charters that it signs up to and ratifies, and must confer upon them the full power of the law.

Crimes: Article 95 removes the Article 76/2012 stipulation that (in addition to what is mentioned in the penal code) a crime could be deduced solely from the text of the constitution without a specific stipulation in the penal code, which critics saw as a backdoor to incorporate traditional Islamic punishments into the judiciary without new legislation.

Shura Council/Upper House: After a grueling political marathon and infighting, the upper house of parliament, long criticized for being of little use in its traditional form, has been abolished. Critics wanted to retain it and expand its powers, while supporters of the abolition see it as best to streamline legislation and save budget overhead.

Parliamentary elections system: The article specifying the electoral system was rejected in the vote on the draft constitution. The article had originally stipulated a mixed electoral system that reversed that of 2012, intending to have two-thirds of seats for individual candidates and one-third for party lists. Nineteen members voted against it, three abstained. The decision on the electoral system and the districting will be left for the interim president. The debate publicly tried to balance an electoral system that would encourage a vibrant multi-party system (seen as the likely effect of party lists) and one that would limit a potentially strong electoral return of the Muslim Brotherhood (proponents claimed single candidate systems would do this). Article 102, a novelty, also says the president can appoint up to 5% of the members of parliament, subject to a law determining the procedures and criteria of nominees.

Legislation: The new constitution now says that for a proposed piece of legislation to go into committee, it has to have the support of one-tenth of the total membership. This was not there before.

Governors: There has been growing demand to have local governors elected rather than appointed. After much debate, the draft constitution eventually left the option to elect or appoint governors to legislators as per Article 179, and did not specify the method.

The military: This is one of the most controversial sections of the draft constitution. The draft retains military trials for civilians, but has maintained it in more specific contexts, including: cases that represent direct assault on military personnel during active duty; military establishments and ammunition; military zones; military secrets and documents or military factories; and crimes related to obligatory conscription. The law is to specify exactly the nature of these crimes. This has been one of the most controversial and opposed elements of this draft constitution, and the military has remained steadfast in hanging on to it. The military will also have a veto over the choice of defense minister for two presidential terms as per Article 234.

The flag: Article 223, which describes the flag, bans “insulting the flag” and sets it as a crime.