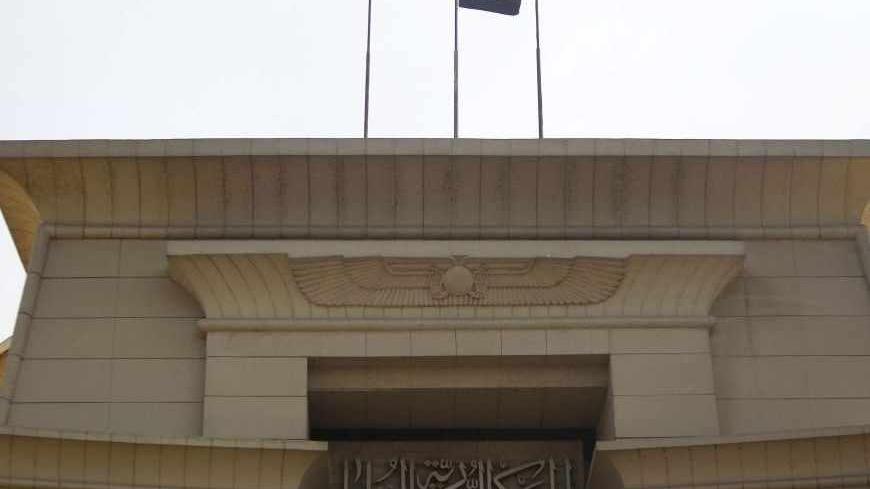 The Egyptian flag is seen at the Supreme Constitutional Court during the swearing-in ceremony of the head of the court, Adly Mansour, as the nation's interim president in Cairo, July 4, 2013. - REUTERS/ Amr Abdallah Dalsh

While Mohammed  Morsi might be out of power, one significant feature from his year in office isn’t, namely the potential for receiving major government announcements while Egyptians are actually supposed to be sleeping. Almost exactly at midnight, Egypt’s anticipated new constitutional declaration has finally come out into the light, setting the ground rules for the political transition following Morsi’s ouster.

The short transitional charter of 33 articles, largely barebones and half the size of its 2011 predecessor, has a lot of remarkable features and implications, and says a lot about where Egypt is right now politically.

In brief, it calls for:

The referendum and the parliamentary and presidential elections could all be concluded under a year.

Remarkably, only the lower house of parliament is mentioned, suggesting that the upper house Shura council might be abolished altogether and is not in the current plans. The constitutional declaration also drops the specific stipulation of a 50% share of seats for workers and farmers in parliament, which proved to be problematic. Also, the express mentioning of popular presidential elections suggests that the general underlying intention is to have at least a hybrid political system of some sort.

A 10-member committee, composed of six top judges and four constitutional law professors, will be tasked with amending the 2012 Constitution.  The committee is thus purely technical, and gets no official guidance with regard to what is it trying to achieve, suggesting the current “administration” should have effective final influence on the text behind the scenes. That committee will submit its first draft within a month to a 50-strong assembly representing some of the major components of society, including the police, military, youth, farmers, the churches, the Islamic institution Al-Azhar, national councils, public figures, and unions and syndicates. Each group, through its main official body, will nominate its representative, while public figures will be nominated by the cabinet. This assembly can only suggest amendments to the draft, but has no voting power. There will then be about two months for public and assembly consultations. The president will then receive the final draft and submit it to referendum within a month. One debatable claim is that the wording of the constitutional declaration does not allow for the committee to remove or add new articles, but rather only amend existing ones. If true, that will likely be amended.

The interim president, who is the constitutional court head, officially has absolute powers, including full legislative authority. The only two items, as I understand, where his powers are limited are using the emergency law (he must get cabinet approval in general, and must undertake a referendum in case of a second extension), and declaring war (must get the approval of the national security council, whose composition is yet to be determined by him). Of course, it is widely accepted that the military is the main center of power behind the presidency.

The constitutional declaration shows the strong leverage the Salafist Al-Nour party has on the transitional process, already blocking two prime minister nominations. One of the main objections to the 2012 Constitution by the liberal opposition was to the Salafist-written Article 219, which elaborated on the “principles of Islamic Sharia” stated in the famous Article 2 rather than keeping the text open-ended and more flexible. The controversial Article 219 actually remains. In fact, the previous articles 1 (which mainly spoke of democracy, identity and citizenship), 2 and 219 have been merged into a unique, new, Article 1. The new article reads:

“The Arab Republic Of Egypt is a state whose system is democratic, based on the principle of citizenship; Islam is the religion of the state; Arabic is its official language; and the principles of Islamic Sharia — which include its general evidences, its fundamental and jurisprudential rules, and its recognized sources in the doctrines of the people of the Sunna and Jam’aa (i.e., Sunnism) — are the main source of legislation.”

Interestingly, direct references to pan-Arabism and Africanism have also been dropped, either for the sake of efficiency or to avoid another wedge issue behind the scenes over wordings.

What is also interesting is that the Salafists managed to keep the restriction of freedom of religious worship to the “three celestial religions” in Article 7 (i.e., Christianity, Islam and Judaism), which was not the case under the 1971 Constitution but became so in the 2012 version, under Salafist influence. The 1971 Constitution had also stated that freedom of belief was “absolute,” while the 2012 Constitution and the charter denoted it as “protected.” The overall implications are big in that temporary things have a tendency of becoming permanent, suggesting the articles above could end up becoming even harder to amend. They also indicate the bargaining power Salafists have right now (which increasingly appears to be bigger than what the military and the opposition had expected), with the Salafists realizing how their presence helps the military and the opposition maintain the image of a wide multi-ideological revolution rather than that an anti-Islamist uprising, and does not play into “it’s a war against Islam” claims by the Brotherhood and some Islamists. Thus, any real potential debate on the articles is ostensibly being temporarily delayed (rather than immediately tackled in the declaration) until later when things hopefully have calmed down a bit. This will likely be the major dividing point come amendments time. One thing that has been dropped is the express reference to Al-Azhar’s role in expressing a supposedly non-binding opinion on Sharia matters pertaining to draft legislation, which some worried might open the door to Al-Azhar eventually exercising heavy influence on legislation in an Iran-like manner as time passed.

Article 9 continues the principle expounded in articles 13 of the 1971 constitution and 64 of the 2012 Constitution — that the state can theoretically legislate some form of forced labor if needed (generally understood to mean public service), but that such labor cannot exist without legislation. That concept has had its fair share of critics.

The declaration retains the more flexible ban on parties that “discriminate on the basis of ... religion,” but does not return the outright ban on religion-based parties that existed in the 1971 Constitution. This is another move to accommodate Islamists into the transition.

The highest court returns in Article 18 to its former modus operandi, allowing it continuous supervision of laws rather than supervision only prior to enactment as stated in the 2012 Constitution.

Freedoms of speech and expression

Article 7 also continues to limit freedoms of speech and expression based on the confines of the law. Of course, no one expected that to change anytime soon. Remarkably, the same part of the text in Article 7 pertaining to said freedoms appears repeated verbatim in Article 11, at least based on the scans published by Al-Ahram. This could suggest hasty drafting, if not a publishing error.

Article 19 is vague enough to potentially allow for military trials of civilians, another point of long constitutional contention in Egypt.

The right to strike

The right to strike, a major issue over the past 2½ years, is not expressly mentioned in this declaration.

The remainder is a set of general articles outlining some basic civil rights and administrative details, largely based on the 2012 Constitution and previous constitutional text. But I am sure further analysis along the way might yield some more interesting points, and I would not discount potential amendments to the declaration as well. One thing, almost for sure: A somewhat brisk pace that does not sacrifice quality of output nor the sustainability of the transition could surely come a long way in helping Egypt stabilize.

Bassem Sabry  is an Egyptian political writer and commentator. He could be found on twitter as @Bassem_Sabry.