A Look at Egypt's Draft Constitution

Egypt's constituent assembly has quietly produced another constituional draft over the weekend. Bassem Sabry outlines the document's changes, which include apparent limitations on the scope of religious freedoms. Neither Salafists nor liberals are pleased with the draft, but its ambiguity will make it tough to challenge, he writes. 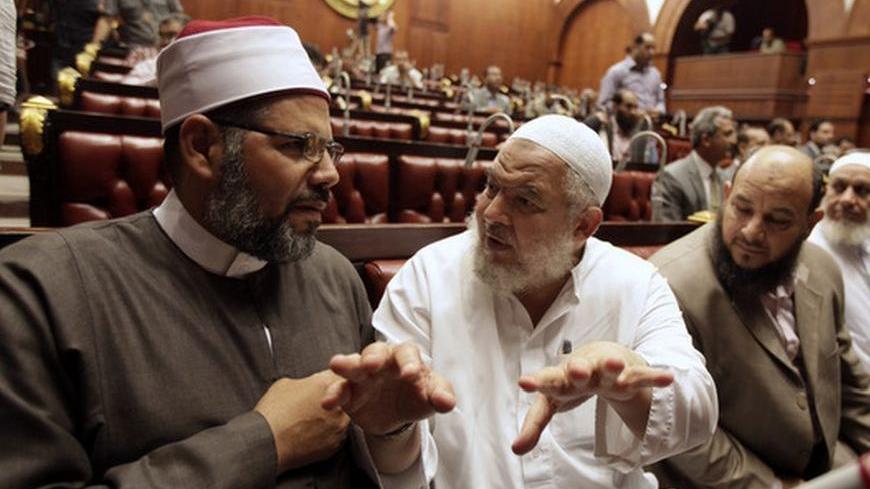 After much hype, we were finally introduced a bit more than a week ago to the official first draft of Egypt's post-revolution constitution.

No, wait. That is actually sort of incorrect. After that draft was presented to media and found its way all over news websites, the constituent assembly quietly introduced another draft over the weekend, to the reported surprise and dismay of some of the assembly's members.

The differences between the drafts are anything but negligible. The first draft, unlike the latter, left certain articles blank, with placeholders stating they were "subject to [further] debate." Entire chapters were also missing in the first draft, while certain articles were changed between the drafts in syntax and positioning, most prominently the controversial text pertaining to freedom of religious belief.

Before I proceed, for the purposes of this article, do note that I am not a constitutional expert by any means, but that I am rather channeling my personal walkthrough as well as common established critiques.

Spending time with either draft can leave you a bit perplexed. But focusing on the second — and theoretically complete — version, two features are the most striking at the surface. For one thing, it pretty much reads as an expanded, updated and somewhat more conservative version of the 1971 constitution, with many of the previous articles incorporated largely verbatim and in the same order.

The second feature is the large absence of anything outright "revolutionary" about it, in text or in substance. For example, there is no magnanimous preamble of the sort you would expect of an Egyptian constitution in this context. There are, according to what I have seen, only two mentions of the word "revolution" in all 231 articles of the draft. The first pertains to the state's role in honoring war veterans, revolutionary martyrs and injured, and caring for them and their families. The other is simply a time stamp specifying all that post-revolution presidents could become members of the revamped upper house of parliament.

There are quite a few functional changes throughout, including a move toward a more semi-presidential system than that during the time of Mubarak, based on the argument that weakening the executive branch is necessary in any post-dictatorial democratic transition. But the draft features a surprisingly strong president who retains, for example, the power to nominate the prime minister. However, parliament now gets the power to approve the nominated prime minister and his official plan for government. If the approval is not granted, the president gets another chance at forming a government. If he fails again, the parliament gets one month to form the new government or it faces dissolution.

Noticeably, and somewhat controversially, gone is the Nasser-instated stipulation that workers and farmers must constitute at least 50% of parliament and local councils. And in yet another sign of how the exercise of influence by existing political institutions can reverse what were solid post-revolution constitutional conclusions, the previously quasi-useless upper-house Shura Council survives miraculously as the revamped "senate" of still modest powers. This senate is to be a smaller chamber than the Council of Deputies (the new name of the lower house), and its members all have to be over 40 years of age. A quarter of its members would be nominated by the president from among former and retired civil servants, army and police leadership as well as from public, religious and scientific figures.

Another controversial functional change involved the Constitutional Court. The court's ability to question the constitutionality of laws would now be restricted to reviews of draft legislation, with virtually no power over the laws once they are enacted and signed, beyond traditional interpretative and other standard powers.

The draft also appears to vest the president with the power of choosing the court's head, rather than through the general assembly of the court, although it has been reported that a compromise with the constituent assembly may have been reached for the court to retain its current powers and system. The proposed change enraged the current lineup of the court, with the head of the court describing it as a "a step backward and a flagrant intervention in the court's affairs." The court and its supporters saw this as an assault by the Islamists against a constitutional court that dissolved the recent Islamist-dominated parliament, the same court that some alleged to be collaborating closely with the SCAF during their reign.

Another important and controversial novelty is the compromise on Article 221. The article explains that the "principles of Islamic Shariah," famously mentioned in the hotly-debated Article 2 of the constitution, essentially mean the sources of Islamic jurisprudence used by Sunni Islam. Previously, the Constitutional Court had explained the "principles" as the religious rules that were clearly established by religious text, and are of absolutely certain proof and meaning, which practically only referred to a handful of rules. The potential impact of this proposed Article 221 remain a subject of much debate between those who see it as having no real effect and those who see it as further orienting the constitution in an Islamist direction.

But the most profound features of this second draft of the constitution are the more conservative spirit it espouses and the apparent new constitutional limitations on the scope of religious freedoms.

For example, among the more controversial new articles, Article 9 stipulates that "The family is the basis of society, founded on religion, morals and patriotism. And the state and society ensure the original/authentic nature of the Egyptian family, its solidarity and stability and the protection of its traditions and its moral values." Similarly, Article 10 commits "the state and society to care for public morals and norms and protect them, and the empowerment of original/authentic Egyptian traditions," and to ensure a "high standard" for "religious, national education/upbringing, scientific facts, the Arabic culture as well as the historical and civilizational heritage of the people, and that is upon the regulation of the law." Article 11 also further entrusts the state with promoting "the cultural, civilizational and linguistic unity of the Egyptian society" and "the Arabization of sciences and knowledge."

Equality of men and women is enshrined and promoted, as per the now-famous Article 68, but in a manner "not conflicting with the laws of the Islamic Shariah." A common critique is that such articles, despite other constitutional articles promoting freedoms, could be theoretically be used to limit freedoms of expression, speech and creativity in on the long run. Liberal and feminist groups, similarly, worry the current text of Article 68 could potentially be used to justify male-favoring legislation and court verdicts favoring males by conservative-leaning jurists and judges.

But perhaps the most controversial change is in Article 37. Previously, the beginning of the first draft stated that "freedom of belief was absolute." The second draft, however, now writes that "freedom of belief is protected." It then goes on to specify that "the state guarantees the freedom of construction of houses of worship for the Celestial Religions" — with the "Celestial Religions" here indicating the three major Abrahamic faiths of Christianity, Islam and Judaism. Article 3, a novelty, replicates the spirit of the unchanged Article 2 of the 1971 constitution, but for a different target group. It specifies that the "principles of the Shariahs [bodies of law] of Egyptian Christians and Jews" shall be the "primary source of legislation" on personal affairs, the regulation of their religious communities and the choosing of their spiritual leaders. Both articles raise the question of the status of other religious and non-religious groups, like the Baha'i, who still — for example — cannot officially get married in Egypt, as well as the question of whether they could potentially have at least a neutral civil code.

Ironically, both the Salafists and the liberals are dissatisfied with this current official draft, while the Brotherhood remains relatively limited in terms of commentary. A leading Salafist figure claims the draft is too secular and threaten to amass protests against it, while secular and liberal groups — a smaller percentage in the assembly — fear the new constitution could be used to create a theocracy of some sort.

The more difficult challenge is for the liberal and secular opposition to the draft. Most of the texts appear general and flexible enough, and not particularly ultra-conservative in their syntax, all in a manner that would make it more difficult for this opposition to build a case that would easily resonate and create sufficient public counter-momentum. It seems that their only chance to make a case for the amendment of such disputed articles is now, before the constitutional assembly votes on the draft and sends it off for a referendum.

But then again, no one really knows what would happen if the court decides this week to once again dissolve Egypt's second constituent assembly, leaving it entirely up to President Morsi to form a new, and certainly controversial, assembly.