Political parties in Baghdad that are close to Iran may be trying to use Iraqis' ongoing protests as an excuse to change the parliamentary system to a presidential one — something the protesters have never asked for. 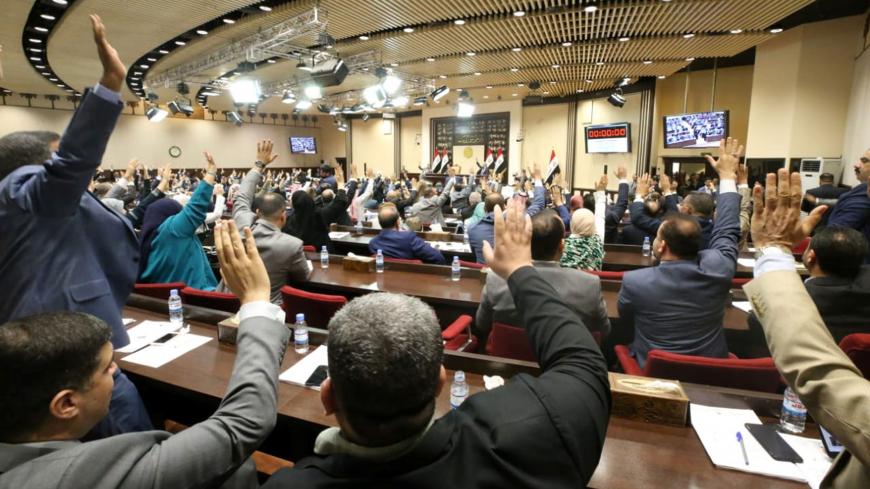 BAGHDAD — In reaction to continuing mass protests that began Oct. 1, the Supreme Judicial Council is reviewing the Iraqi Constitution and will submit proposed amendments to parliament — though protesters fear that will only delay action on their demands.

Parliament has formed an Amendment Committee that is to complete its recommendations within four months, aiming to answer protesters’ demands for reforms to end corruption and the electoral quota system, which is based on religious and ethnic affiliations.

However, suggesting that the primary aim of the popular protests is for the government to amend the constitution is ironic, as they are calling for the current government to resign before elections are organized under a new law with UN supervision. Protesters accuse the current government of being corrupt and illegitimate, citing low election turnout, ballot boxes being set on fire and results being forged.

“The protesters in Baghdad have rejected the parliament’s Amendment Committee because [committee] members are from parties and sectarian blocs that contributed to ruining the country. We have taken to the streets to remove them from power and it's unreasonable to accept them as legislators for the next stage,” Naim al-Shuwaili, a civil activist in Baghdad, told Al-Monitor.

"The priority should be for a new election law that adopts direct individual voting and multiconstituency elections under full UN supervision. The future parliament will be the one to amend the constitution. ... The current parliament is discussing constitutional amendments with the aim of wasting time and delaying the discussion of a fair electoral bill.”

Regarding the call for a new election law, Iraqi President Barham Salah and the Cabinet this week each drew up drafts for one and may combine their proposals, according to the state-run Iraqi News Agency. The president's version calls for reducing the number of parliament members, allowing for younger candidates and forming a new electoral commission without using the quota system on which the current commission was formed. However, the next stop for the proposals is the same parliament the protesters reject.

As for constitutional amendments, the various political blocs have expressed three differing stances. Shiites — in particular the Fatah alliance, which is affiliated with Iran-backed Popular Mobilization Units (PMU) — want to convert the parliamentary political system to a presidential one. Kurds want to preserve their political gains, especially those related to disputed areas. Sunnis, meanwhile, seek to maintain the parliamentary quota system, which is designed to ensure that their representatives are allotted a percentage of ministerial positions, as well as the speaker of parliament position.

According to a Nov. 7 statement by Amendment Committee member Rashid al-Azzawi, the most important proposals to be discussed are determining whether to go with a parliamentary or presidential system; Article 76, which addresses the power of the largest political bloc; whether governors should be directly elected by the people or by provincial councils; and determining the fate of provincial councils if they are kept.

Parliament also plans to discuss the oil and gas law, and whether the number of parliament members should remain one for every 100,000 citizens, or be determined by province.

Meanwhile, Kurdish parliament member Diyar Tayeb told Al-Monitor, “We believe Iraq's problems are due to the non-implementation of the constitution, not the other way around. This means there is no problem with the constitution and it doesn't need to be amended. If we want to achieve reform, we simply need to apply the constitutional provisions.”

Tayeb noted that amending the constitution is a difficult task. “Parliamentary blocs cannot all agree on specific amendments in the period set by the speaker," he said.

Atheel al-Nujaifi, a member of the Salvation and Development Front and a former governor of Ninevah province, stressed that the majority of the Sunni parties refuse to change the current political system.

He tweeted Oct. 29, “The current parliament is not eligible for a constitutional amendment, nor is the current government qualified to persuade protesters that it will meet their demands, which are the resignation of the government, formation of an interim government whose members do not participate in the elections, holding elections with a new electoral law and UN supervision and a constitutional amendment by a popularly accepted body.”

On the other hand, the Shiite blocs and leaders, especially members of the Fatah Alliance, expressed the need to amend the constitution for the main purpose of having a presidential system rather than a parliamentary one. The current system "proved it was a failure and was a reason behind quotas and corruption,” said Badr organization leader Hadi al-Amiri.

It does seem unlikely that political parties will be able to agree on amendments within the four-month period, for many reasons — especially the major differences over which articles any amendment should address. In addition, as Tayeb said, the mechanisms of amending the Iraqi Constitution are very strict and complex. For example, an amendment must be approved by an absolute majority of parliament members, after which it has to be voted on by the public. The amendment would become part of the constitution if a majority of provinces vote for it and if it is not rejected by two-thirds of the voters in three or more provinces.

The demand to amend the constitution has been confined to the Shiite blocs supporting Prime Minister Adel Abdul Mahdi — mainly the PMU linked-Fatah alliance. It appears Tehran wants to divert the course of protests from the resignation of the government and early elections to amending the current system from parliamentary to presidential, which would serve Shiite political interests at the expense of the other blocs.

It is noteworthy that protesters never suggested changing the parliamentary system to a presidential one in the first place. Some political blocs have been calling for that change for years but faced major rejection, as other blocs fear the return of dictatorship if the president is given most of the power again.

Meanwhile, critics say any adjustments the Amendment Committee might propose won't ease the Iraqi crisis, and won't even come close to the protesters’ fundamental demands of comprehensive political change.