A group of pro-Iranian leaders in Iraq's Popular Mobilization Units want to switch the Iraqi governing system from parliamentary to presidential. 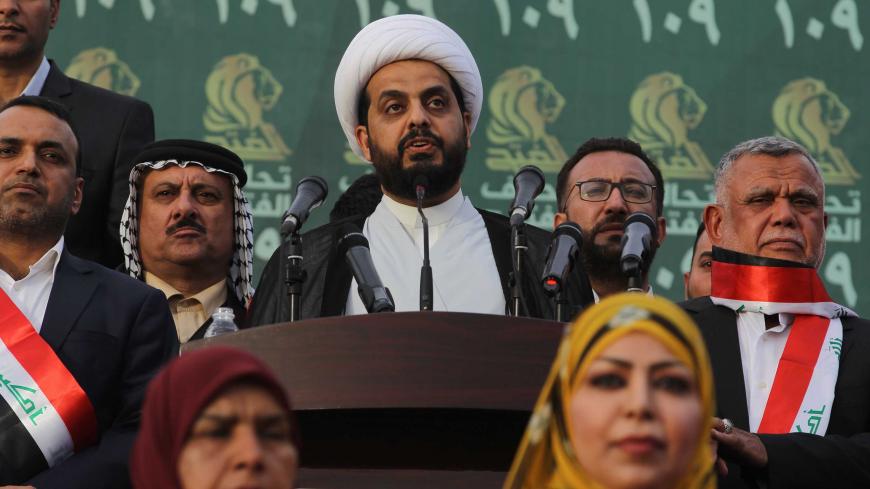 Qais al-Khazali (C) leader of Asaib Ahl al-Haq, one of the units of the Hashid Shaabi, gives a speech during a campaign rally for the Fatah Alliance, a coalition of Iranian-supported militia groups, in Baghdad, Iraq, May 7, 2018. - AHMAD AL-RUBAYE/AFP/Getty Images

BAGHDAD — As differences between Iraqi Prime Minister Haider al-Abadi and some pro-Iran factions of the Popular Mobilization Units escalate, these factions are trying not only to dismiss Abadi but also to change the system of government from a parliamentary to a presidential one. Currently, the prime minister holds executive power.

Several of the factions demanded Abadi's resignation Sept. 8 after parliament held an emergency session to address deadly protests in Basra. Citizens are rioting over, among other things, a lack of basic public services that has resulted in tens of thousands of people flooding hospitals after consuming water that is highly polluted and salinated. Abadi is visiting Basra Sept. 10.

Iraq's political parties have failed to form a new Cabinet; they are still arguing over which coalition holds the majority of parliament seats. Abadi, who leads one of the coalitions, is seeking another term as prime minister.

Calls to transform the type of government are being met with a series of substantive and legal obstacles, which experts say makes it difficult to imagine this scenario playing out anytime soon. However, some prominent political forces confirm that this goal is one of their priorities.

Sheikh Qais al-Khazali, head of Asaib Ahl al-Haq (AAH), which secured 15 seats in Iraq's new parliament, called Aug. 23 for a presidential system of government. Khazali tweeted that there is no real solution with the existing parliamentary system, which is based on quotas and will continue to yield corruption. He called on everyone to “cooperate in changing the regime to a presidential or semi-presidential system that would save the country.”

Former Prime Minister Nouri al-Maliki, one of Iraq's three vice presidents and head of the State of Law Coalition, also has called for this change on several occasions, stressing, “The country, with its inherited problems, needs a strong system — a presidential system whereby the president is elected, entrusted and held accountable by the people themselves.”

Taking that step would require amending the Iraqi Constitution. According to Article 142 of the constitution, a committee should be formed including representatives of the main components of the Iraqi community. The committee should, within four months, submit a report to parliament on the necessary amendment. An amendment would require the approval of an absolute majority of parliament, and then a popular referendum would be held within one month.

Laith al-Azari, a member of AAH's political bureau, said turning the governing system into a presidential one will be a top priority of his movement.

“The parliamentary system has failed in Iraq and brought only … disrupted laws and corruption,” Azari told Al-Monitor. He added, “We believe that a president who is directly elected by the people with broad powers would end the quota system and swiftly transform the country for the better."

Azari also noted that many of the political parties that garnered the most votes in the recent elections share the same vision, which could facilitate a changeover — "especially since everyone agrees that amending the constitution is the basis of reform." Also, a presidential system would prevent the political vacuum that seems to happen with all Iraqi elections.

Sami al-Askari, a member of the Islamic Dawa Party, concurred with Azari, stressing the need to have a president elected directly by the people. However, he believes this idea is far-fetched since "Sunnis and Kurds" reject this proposal.

“Amending the constitution is a long and difficult process that requires a consensus in parliament. And a referendum seems impossible at the moment, despite our conviction that Iraq would be better off with a presidential system,” Askari told Al-Monitor.

“Kurds are calling for the amendment of Article 140 of the constitution [to resolve the status of disputed areas] and the articles on oil and gas. Meanwhile, other parties are calling for the amendment of the personal status law and other laws. This is why any amendment to the constitution to change the governing system will open the door to several other changes to satisfy the different Iraqi components,” Askari added.

Kurds reject a change in the governmental system because they realize that any elected president would be Shiite since the country is predominately Shiite. They also believe that the president would appoint other Shiites, distancing other groups from senior positions in office.

Traditionally, a Kurd holds the presidency, a Shiite is prime minister and a Sunni Muslim holds the speaker of parliament position.

According to Tariq Harb, head of the Legal Culture Association, “This shift would give the president the power to ratify some treaties and conventions and approve the appointment of some employees of special grades. [If necessary] the president could be dismissed by the approval of two-thirds of the members of parliament. The president could also withdraw confidence from and dismiss ministers, instead of parliament, and would have the authority to declare war and a state of emergency." The change could also affect the way the budget is approved.

Several other articles would need to be amended to shift certain of the prime minister's powers to the president, including the ability to dissolve parliament and nominate members of the Federal Supreme Court, Harb said.

Turning Iraq's government into a presidential system is one of the demands raised by demonstrators in the central and southern areas of the country who wish to see the national quotas come to an end. It appears most Iraqis aspire to political reform, which reflects public and political recognition of the failure of the current system. Yet any change to the current system through constitutional or democratic means is almost impossible, especially with the predominance of sectarian political parties benefiting from the quota system.