Why do some Iraqi MPs refuse to be sworn in?

More than a year from the formation of the Iraqi parliament, some members of the parliament refuse to be sworn in, hoping to gain executive posts. 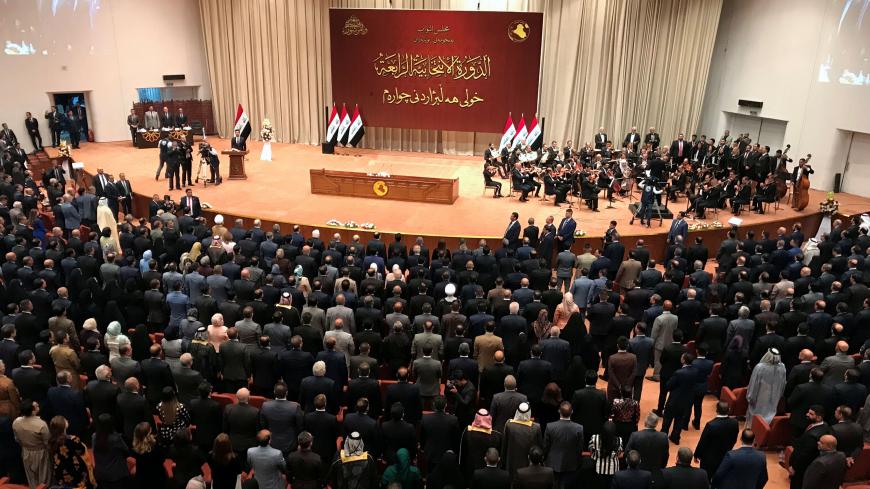 BAGHDAD — A crisis involving the naming of vice presidents and legislators who don't attend parliament is showing the limits of Iraq's laws. There is no deadline for the president to choose his deputies or a mechanism to dismiss or hold accountable members of parliament who refuse to attend legislative sessions.

Nouri al-Maliki, a former vice president and prime minister who now serves in parliament, said in a radio interview at the end of August that he wanted to be vice president again and that the delay of President Barham Salih in choosing his deputies is “a clear violation of the constitution.” This matter also shed light on the issue of members of parliament who have yet to be sworn in.

Since the legislative elections in May 2018, parliament has replaced several legislators who took up executive positions in the federal government or in local governments.

However, others who were elected to parliament, including Maliki, former Prime Minister Haider al-Abadi, former Interior Minister Qasim al-Araji, Basra Gov. Basra Assad al-Aydani and acting Kirkuk Gov. Rakan al-Jabouri, continue to refuse to take the oath of office and take up their legislative functions in the legislature. It appears that most if not all of them are seeking through this maneuver to keep their political options open for as long as they can. For example, Aydani and Jabouri could lose their governor's posts once long-delayed provincial elections are held.

The Iraqi Constitution and the parliament's protocol have no deadline for the swearing-in of people elected to parliament. In addition, the parliament's presidency committee has blocked Article 18 of the protocol, which calls for the publication of the names of the legislators who have attended parliament and those who have not.

Article 18 reads, "In the event of repeated absence without a legitimate excuse five consecutive or 10 non-consecutive times during the annual session, a written warning shall be sent to the absent member inviting him to commit to attend. In case of noncompliance with the [parliamentary] presidency, the matter shall be submitted to the council [parliament] at the request of the committee.”

Saeb Khadr, a member of the Iraqi parliament’s legal committee, said, “Parliament needs to amend the current laws but there is no real desire in this direction during the new legislative term. There are other laws and interrogations of ministers on the agenda.”

He added, “Handling this issue will cause embarrassment to large blocs and important figures in the country. The real responsibility falls squarely on the presidency of the parliament, which has the power to apply Article 18, especially with regard to the members of parliament who have yet to be sworn in.”

Khadr said the issue involving the vice presidents has dragged on for a long time because of fears of raising new problems among the political parties, and the difficulty of agreeing on who will take up the vice presidential and deputy prime minister posts and how many such posts there will be.

The Supreme Court, however, overturned Abadi’s decision in 2016, deeming it “unconstitutional,” especially since the constitution stipulates in Article 69 that the “law shall regulate the provision of selecting one or more vice president.”

Fuad Masum, who served as president from 2014-18, had three vice presidents: Maliki, Ayad Allawi and Osama al-Nujaifi. These are plum posts that some parliamentarians, such as Maliki, want to fill. But how many vice presidential positions should there be?

The Sadrist movement, represented by the Sairoon parliamentary bloc, is against Maliki taking a vice presidential post again. Sunni blocs have yet to agree on someone they would like to see as a vice president.

A large number of candidates take part in elections. The candidates' main purpose is to get a seat in parliament. The motive is to collect as many votes as possible for the list or to win a parliamentary seat if another position is hard to secure within the sectarian quota system in place in Iraq since 2003.

The governor of Basra, Aydani, refuses to relinquish his membership in parliament. Jabouri — who was appointed acting governor of Kirkuk by Abadi when Abadi was prime minister — also refuses to give up his parliamentary post.

Observers believe Abadi was and is still hoping to regain the premiership if the opposition blocs can withdraw confidence from Prime Minister Adel Abdul Mahdi, and not being sworn in may be part of his machinations for reaching that goal. Meanwhile, Araji has yet to explain why he has failed to take the constitutional oath as a member of parliament.

“The Iraqi parliament is in the process of redrafting its rules of procedure and interpreting the paragraphs on constitutional oath to lift any confusion regarding the refusal to attend the parliamentary session for political reasons or for other reasons," legislator Hussein al-Oqabi told Al-Monitor. “Several ideas and proposals are being considered regarding the new draft rules of procedure, most notably in relation to setting a time limit for taking the constitutional oath and the allowed number of absences for each member of parliament.”

It seems unlikely that the current parliament will amend the laws that have brought about this situation. The political blocs that dominate the political scene do not want to lose the benefits provided by the legislation in force. In the meantime, the blocs that formed the government (Sairoon and Fatah) are busy pondering the future of Abdul Mahdi because of doubts that he will complete his constitutional mandate.