Delay looks likely for Iraq elections, currently set for May

Iraq may wind up postponing its elections, currently set for the spring, because the legislature's lengthy struggle to pass a new elections law has extended beyond a constitutional deadline. Not everyone would be upset by a delay. 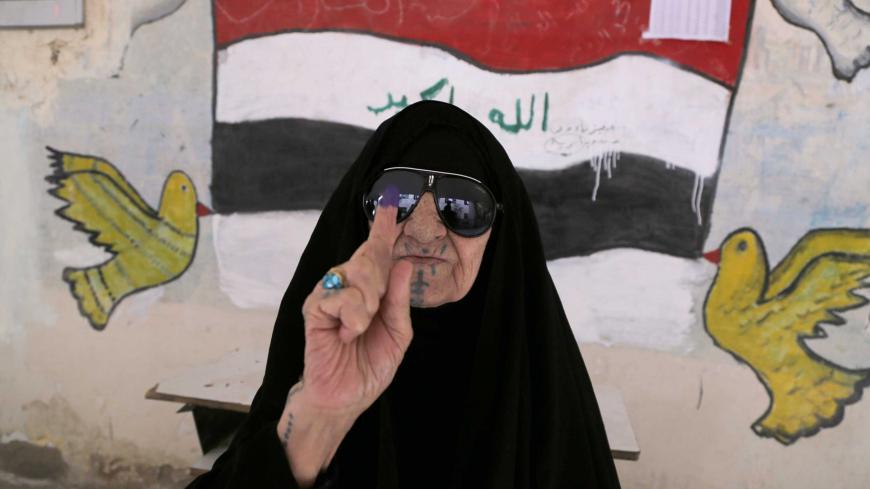 A voter shows her ink-stained finger at a polling station during a parliamentary election in Baghdad, Iraq, April 30, 2014. - REUTERS/Wissm al-Okili

BAGHDAD — It's beginning to look like Iraq won't make it to the polls on time — again.

Though Prime Minister Haider al-Abadi just announced Dec. 5 that parliamentary and local elections will be held even earlier than scheduled — on May 12 instead of May 15, to avoid a conflict with Ramadan — several events may be coalescing to delay voting.

The legislature is still struggling with disputes over an election bill that must be approved by Dec. 15 if parliament members want to see its contents put into effect in time. At the same time, lawmakers are also busy hashing out a budget bill. The current session is already in overtime; it was supposed to have ended Nov. 30.

The Independent High Electoral Commission says it needs six months to prepare for elections based on any new laws. Otherwise, the current law will remain in effect. The law as it pertains to legislative elections isn't the main problem, since parliament agreed to abide by the Sainte-Lague method of parliamentary seat allocation. But there are disagreements over local elections (provincial councils), especially regarding the disputed Kirkuk province. Differences raised among the province’s Arab, Turkmen and Kurdish components would be difficult to settle in such a short time.

Rahim al-Daraji, a member of parliament’s Legal Committee and a member of the parliamentary Shiite National Alliance bloc, told Al-Monitor, “The dispute over the elections in Kirkuk is the main obstacle. The province hasn’t witnessed elections since 2005, and several proposals have yet to be settled in the absence of a population census. These proposals include holding elections in the province based on the equation that Kurds, Turkmen and Arabs [each] have 32% of the seats, while the remaining 4% of the seats are allocated to Christians for one round.”

Daraji said the only option he sees now is to extend the legislative term until a new electoral law is approved, and to postpone the elections for weeks or even months.

The Sunni blocs are already seeking a six-month delay in the elections, until the Sunnis displaced by the Islamic State (IS) can return to their areas, according to Mutashar al-Samarrai, a member of the parliamentary Mutahidoun bloc. The parliamentary elections have already been postponed once because of IS; they originally were scheduled for September.

“Millions of Sunnis are living in camps and are unable to participate in the elections. Meanwhile, the Sunni blocs will not be able to conduct their electoral campaigns in destroyed cities. We do not see a problem in delaying the elections," Samarrai told Al-Monitor.

“The liberated Sunni cities are suffering from a lack of services, security and transport. Insisting on holding the elections under these circumstances serves the interests of specific political parties. In this case, the Sunni blocs will fail to secure parliamentary seats, like in previous elections,” he said.

Samarrai said, “Those who are talking about the sacred constitutional timing [of elections] should be reminded of the many times this constitution has been violated. They should apply all the constitution’s articles before insisting on holding the elections under such circumstances.”

The United Nations Assistance Mission for Iraq said in a Nov. 22 statement that even though it would like to keep to schedule, “The elections cannot be held while the situation in Iraq remains troubled and many Sunnis are displaced.”

Kurdish blocs agree the elections should be delayed. Jamal Kojar, a member of the parliamentary Kurdistan Alliance bloc, said in a statement to the New Sabah paper that the “postponement of elections is the best option in light of the current conditions.”

He added, “The current situation makes it difficult for Iraqi citizens to cast their vote under a democratic atmosphere and away from security [threats].”

However, it seems some parties of the Shiite National Alliance insist on holding the elections on time. The State of Law Coalition, headed by Vice President Nouri al-Maliki, said, “Postponing the elections will threaten the political process in Iraq and lead to a constitutional vacuum.” Maliki stressed the need to commit to the constitutional deadlines.

Issues not addressed in the election bill could also create problems, such as a push by the Popular Mobilization Units (PMU) and political parties close to it to allow its members to participate in the elections. If the PMU gets permission to participate, it's likely to gain much of the majority Shiite vote because of the PMU's work to push IS out of the country. Abadi is trying to keep political parties with armed factions, such as the PMU, from participating, as they are prohibited from doing by existing laws. But PMU leaders are insisting, and there are some gaps in the law they can exploit. For example, some have begun "resigning" from their military positions in the PMU so they can participate in elections. But these moves are just for show, as they are retaining their influence within their factions.