Egypt to launch another round of Palestinian negotiations

Egypt is willing take another shot at unifying Palestinian factions, but no one seems to be getting their hopes up about the outcome. 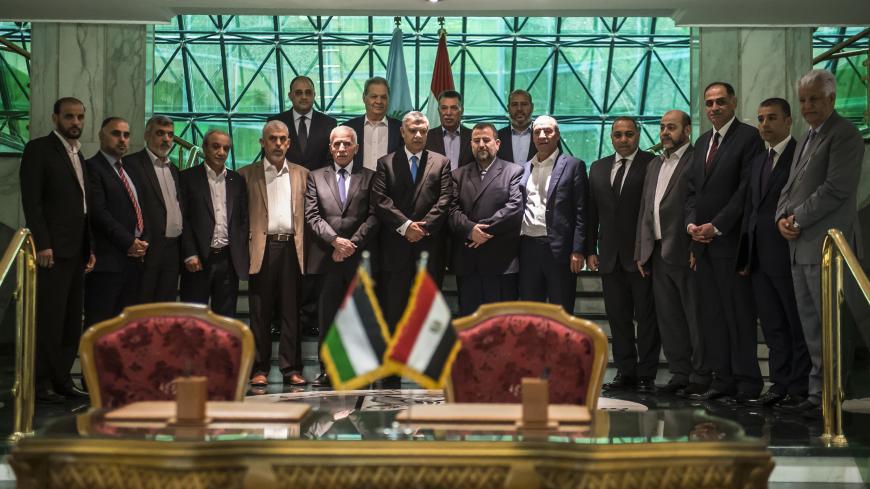 RAMALLAH, West Bank — In the next few days, Egypt is expected to invite Palestinian factions to visit Cairo to start a new round of political consultations in a bid to achieve Palestinian reconciliation.

Azzam al-Ahmad, who heads the reconciliation effort in the Fatah movement, told Palestine TV on June 12 that Egypt is arranging with the Fatah and Hamas movements to resume the reconciliation process in the hopes that Hamas will agree to implement what was previously agreed upon, namely the 2017 Cairo Agreement.

Under that accord, the Palestinian Authority (PA) in Ramallah demanded that Hamas hand over control of the Gaza Strip, including management of the crossings, customs, the judiciary and the Palestinian Land Authority. Such a move would allow the Palestinian government to work in Gaza without restrictions, paving the way for elections.

Following successive failed attempts to achieve reconciliation over the past 12 years of division, Egypt seems to have only a few options left, and several recent reports had indicated Cairo had decided to abandon the reconciliation efforts. According to a report published May 17 by Al-Khaleej Online, Egypt informed Palestinian factions May 3 that it “no longer wants to sponsor reconciliation.”

This was also voiced by Ziyad al-Nakhaleh, secretary-general of the Palestinian Islamic Jihad movement, during a May 27 interview with Al-Mayadeen TV following his visit to Egypt.

"Egypt will no longer foster Palestinian reconciliation,” he said.

However, Kayed al-Ghul, a member of the political bureau of the Popular Front for the Liberation of Palestine, told Al-Monitor, “Egypt informed us ... it intends to invite Palestinian factions to discuss reconciliation in the coming days.”

Ghul added, “Given that the national consensus government has resigned, I think Egypt has decided to focus on forming a government of national unity for a limited time, to create an appropriate atmosphere for presidential and legislative elections that would be held six months after said government is established. Such elections would put an end to division,” Ghul said.

This government, he added, would also look into other contentious issues, such as ways to reform the PLO and its institutions, and ways to include Hamas and the Islamic Jihad, as well as conducting elections for a new Palestinian Legislative Council. The council was dissolved in December by the Palestinian Constitutional Court.

Hussein al-Sheikh, a member of the Fatah Central Committee, told Al-Quds Al-Arabi on June 10, “There are real obstacles facing the new round of consultations. These obstacles are exemplified by the contradictory statements made by Fatah leaders regarding the formation of a national unity government. We can’t talk about forming a national unity government at a time when division is still ongoing.”

He added, “Forming a national unity government before ending division is just absurd.”

However, Talal Abu Zarifa, a member of the Democratic Front for the Liberation of Palestine's political bureau, told Al-Monitor, “The best way to achieve reconciliation is to rebuild the political system from scratch through the formation of a national unity government.”

Although Egypt has sponsored several agreements between the Palestinian factions, such as the Cairo Agreement in 2011 and 2017, and although it is aware of other pacts such as the Beach Refugee Camp Agreement in 2014, it hasn’t been able to bind the parties to implement such deals.

“Egypt doesn’t conclude truces with the Palestinian factions. It has launched many initiatives, but the two parties to the division have been perpetuating and institutionalizing division to achieve personal gains. In other words, if neither of the two parties has the desire to achieve reconciliation, then all efforts will be doomed to failure,” Zarifa said.

Whatever options Egypt puts on the table, Hamas and Fatah are expected to cling to their conditions.

Hamas leader Ahmed Youssef told Al-Monitor, “It seems there are parties within Fatah and Hamas that are not interested in reconciliation despite the political obstacles we are facing, such as the ‘deal of the century’ [US peace plan] and [other] projects targeting the Palestinian cause.”

He added, “Egypt will not put forth any new [initiatives] in the next round of consultations, but it will need to supervise and bind the parties to implement what has been agreed to [as far as] the steps that need to be taken whenever there is a dispute,” he added.

The new round of reconciliation talks comes amid several challenges facing Palestinians, most notably the worsening financial crisis they have been suffering since March, as the PA still refuses to accept customs tax revenue because Israel deducted the portion earmarked for the families of Palestinians wounded, imprisoned or killed battling Israel.

Also, some Arab countries aren't providing financial assistance or loans to the PA, to pressure it to take part in the US-conceived Bahrain economic conference scheduled for June 25 and 26. This conference is considered the first step of the US peace plan, and rejecting the plan is one thing on which Fatah and Hamas agree. Both sides see the plan as being unfair to Palestinians and a means of dashing their hopes for a two-state solution.

As for Egypt brokering unity negotiations, Majid al-Futiani, secretary of Fatah's Revolutionary Council, told Al-Monitor, “We support any Egyptian effort that is based on the agreements and understandings that have been signed in a bid to get rid of division." He added, "We recognize that unity is the only way to strengthen the internal front and confront all conspiracies and projects aimed at liquidating the Palestinian cause."

The chances that the next round of consultations will succeed seem slim.

“Nothing suggests a breakthrough is in the offing, so it is too early to be optimistic, because each side is clinging to its position and conditions," Talal Awkal, a Palestinian political analyst, told Al-Monitor. “We don't need new agreements. Division is ongoing because each party is seeking to achieve its own interests."

Many people believe Egypt will call for a national unity government that includes all Palestinian factions, to set the stage for new elections. However, Fatah rejects such a government unless Fatah controls Gaza.