Why Netanyahu's so quiet on US-Iran conflict

Prime Minister Benjamin Netanyahu is being cautious about engaging Israel in the US-Iran tensions, though he would surely not object to an American attack on Iran. 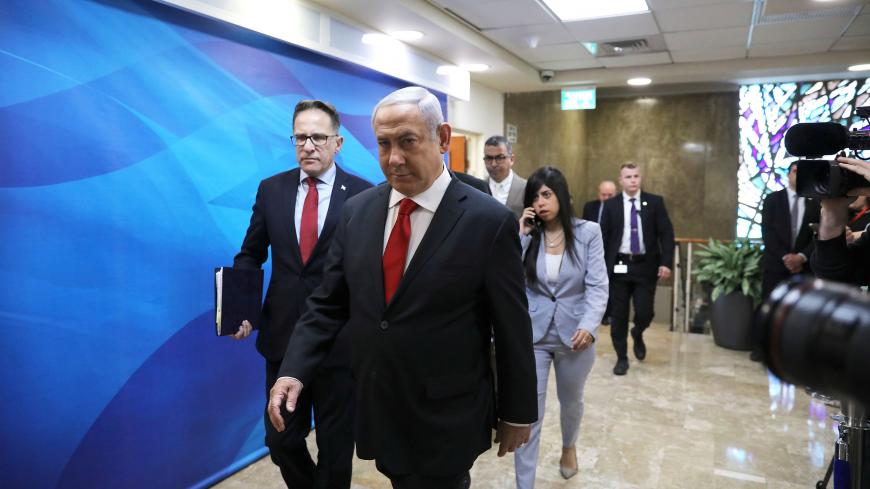 Israeli Prime Minister Benjamin Netanyahu arrives to the weekly cabinet meeting at his office in Jerusalem, May 5, 2019. - Abir Sultan/REUTERS

After being booted from a fighter pilot course, a cadet was asked where he would like to serve in the Israel Defense Forces. “Anti-aircraft,” he responded. “Why there?” he was asked. “If I don’t fly, nobody flies.” A senior Israeli diplomatic source used this old joke to explain Iran’s response to the recent tightening of American sanctions and the blocking of its oil exports.

“What Iran is now trying to prove to the US, Saudi Arabia and the other allies is that if it has problems exporting oil, it won’t be easy for anyone else either,” the source told Al-Monitor on condition of anonymity. An Israeli intelligence assessment shared with decision-makers at a security discussion organized by Prime Minister Benjamin Netanyahu earlier this week holds that Iran is behind recent violence in the region, including an attack on oil tankers in Fujairah Bay and an attack by Houthi rebels on Saudi Arabia’s petroleum infrastructure.

A security source who asked not to be named explained the prevailing assessment in Israel: “The purpose of these attacks was to signal that Iran has the ability to interrupt the flow of oil from the Gulf and that it can force the US and its allies to pay a steep price.” According to this assessment, the attack on the tankers was intentionally minor, intended only to prove to the United States what Iran is capable of.

Israel says that Iran has avoided direct involvement in these attacks, preferring to use its local proxies instead. If, however, full-blown war breaks out, the Islamic Revolutionary Guard Corps will enter the picture. Should that happen, Israel believes that it would be in the top tier of Iranian targets. Netanyahu, in his additional role as defense minister, convened a meeting of the defense establishment’s top leadership to discuss the developments and the growing tension pitting Tehran against Washington and its allies in the Gulf. Participants included Chief of Staff Lt. Gen. Aviv Kochavi, Mossad director Yossi Cohen and other top officials.

Netanyahu instructed the security branches to try to keep Israel out of this conflict. He knows that the chances of conflict avoidance are slim and that he has no chance whatsoever of keeping Israel off the list of Iran's top targets. “The only Western army that has been entangled in a physical confrontation with the Revolutionary Guards last year was the IDF,” an Israeli military source told Al-Monitor on condition of anonymity. “We’ve delivered several direct hits against them, so they still have an unsettled account with us. As such, they will have no qualms about involving us if there is a conflict.” Deterrence is the only viable response to this assessment. “They know that the IDF’s capacities are completely different from anything else they have experienced in the region, except for the US capacity to respond. We believe that they will take this into account if and when they need to decide.”

Meanwhile, the tension in the Persian Gulf continues unabated. Western intelligence assessments, mainly collected by Israel, claim that the Iranians recently transferred a large number of missiles to the Shiite militias it supports in Iraq and apparently to Syrian territory as well. According to reports in the West, Qasem Soleimani, commander of the Revolutionary Guard's Quds Force, ordered all forces in Iraq that answer to Iran to prepare for conflict. “Iran is trying to flex its muscles in order to deter Trump from getting into a war,” a senior Israeli political source told Al-Monitor on condition of anonymity. “They are trying to prove that war against Iran will be nothing like the American invasion of Iraq.”

“The US has no intention of invading Iran,” the Israeli source clarified, “but the Iranians are trying to signal to the Americans that the matchup between them and American forces and the deployment of forces by them and their proxies throughout the Middle East could cause serious damage to American interests and at a steeper cost than anything Saddam Hussein’s regime was able to achieve during the invasion.”

Netanyahu’s distance from the escalating tension can be understood from this period as well. It was Netanyahu who appeared before a Congressional committee in the days leading up to the invasion of Iraq to claim that Hussein was attempting to build nuclear weapons and that toppling the regime in Iraq would rein in Iran and create greater stability throughout the entire Middle East. History proved all Netanyahu’s predictions wrong. No signs were found that Iraq was trying to develop nuclear weapons, while the removal of former Iraqi President Saddam Hussein triggered a chain reaction that set the entire region on fire. Now, Netanyahu is attempting to tone it down, so that he will not be thought of as the person pressuring the Americans to launch a military strike against Iran. It is not at all certain that he will succeed.

Israel is now trying to downplay its support for the stance of US national security adviser John Bolton, who advocates for direct conflict with the Iranians and is therefore considered the most hawkish in the administration. According to someone who has worked with Netanyahu on military matters for years who spoke on condition of anonymity, “It should be obvious that behind closed doors, Netanyahu is praying that Bolton succeeds in convincing the president to launch a military attack on Iran, but this cannot be too obvious. [Netanyahu] cannot be identified with this approach, particularly after he has already come under fire for being the person who pressured the US to invade Iraq.” Jerusalem is watching the conflict between President Donald Trump’s current conciliatory tone, which leads him to avoid unnecessary American military adventurism, and Bolton’s more belligerent approach. The fear is that Trump will blink first in this war of nerves with the Iranians and eventually lose interest and tone down the pressure.

“These are historically decisive times when it comes to Iran’s nuclear capacities,” a senior Israeli political source admitted to Al-Monitor on condition of anonymity. “Trump did all the right things until now. American pressure is taking a toll on the Iranian economy. Still, it ain’t over til it’s over.”

Another problem now emerging on the Israeli side is the continuing Israeli attacks in Syria, known in Israel as the “campaign between the wars,” to prevent Iranian military entrenchment there. Against a backdrop of growing tension and an increase of troops in the region from both sides, it seems obvious that an Israeli attack could be the spark that ignites the barrel of gunpowder. The conventional wisdom in the West is that Israel will now show more restraint before launching any operations, so as not to be held responsible for an escalation, which may be why the latest shipment of Iranian missiles evaded an Israeli airstrike and reached Syria.