As the self-confidence of Tehran grows stronger, President Donald Trump might not be the one to save Israel from Iran. 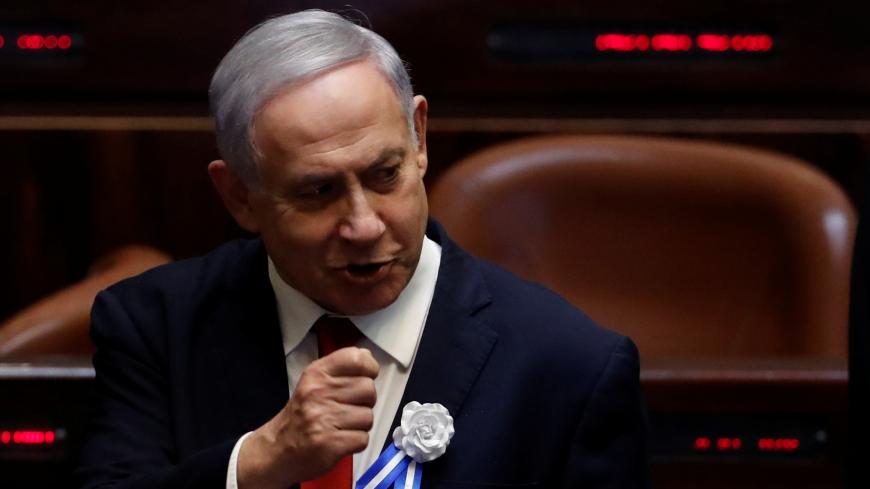 It’s been a long time since he delivered such a chilling and ominous speech at a festive occasion, the swearing-in of the 22nd Knesset on Oct. 3. A faltering Prime Minister Benjamin Netanyahu used the event to make the following remarks: “We are facing an enormous security challenge, which only intensifies from week to week. It increased profoundly in the last month or two, and, in particular, in the last few weeks. This isn’t spin, it’s not a whim, this is not ‘Netanyahu trying to scare us,’” said the prime minister, as he tried — and succeeded, as usual — in terrifying the public and media alike.

He delivered this speech on the same day that Iran took the unusual step of having the head of the Revolutionary Guards’ General Intelligence Services, Hossein Taeb, announce details of an alleged “Israel-Arab plot” to assassinate Qasem Soleimani, commander of its Quds Force. Already on Oct. 1, Soleimani himself was interviewed on Iranian television about an earlier Israeli attempt to assassinate him, during the Second Lebanon War in 2006. Back then, it was Israeli drones circling over Beirut’s Dahieh neighborhood, where he, Hezbollah Secretary General Hassan Nasrallah, and Hezbollah senior Imad Mughniyeh were located. Mughniyeh was since killed in an operation in Damascus that the international media attributed to the Mossad in 2008. Nasrallah survived, but the Iranians claim that the attack propelled Soleimani to the No. 1 spot on Israel’s “most wanted” list. Iran claims that Soleimani was supposed to join Mughniyeh in paradise, when huge amounts of explosives blow up in a mosque named for his father, on the one-year anniversary of his father’s death.

Israel has not reacted to this. While the Iranian report is meticulously detailed, its reliability remains uncertain. What is clear, however, is the tension pervading Israel’s top political and defense leadership. Netanyahu’s remarks to the Knesset echo other past warnings. All indications are that Israel is preparing for the possibility that the “campaign between wars,” which it is waging against Iran and its subsidiaries, could develop into an all-out war along the entire front, which covers a large part of the Middle East. This could be why Netanyahu, but also Israeli President Reuven Rivlin, have been hinting at the necessity to augment the defense budget by billions of shekels, and that this must be done as soon as possible.

When talking about Netanyahu and Iran, it is important to add the following caveat. It has been over a decade since Netanyahu first turned the Iranian threat into political leverage. He has maneuvered successfully with it and danced it all the way to the ballot box, while nurturing an Israeli phobia of everything to do with Iran and its nuclear project. Nevertheless, just as in “The Boy Who Cried Wolf,” it is possible that this time the threats are real. Deep concern seems to be spreading among Israel’s top security leadership that a rapid deterioration of the situation on the Iranian front is a distinct possibility. This would make sense if Israel really was planning to eliminate Soleimani. Such an incident is highly likely to drag the two parties into a state of all-out, open warfare.

And what if this plot to kill Soleimani was fiction and nothing more? Even then, the two sides are facing off against each other, with just a hair’s breadth separating them from all-out war. All signs indicate that Iran decided to respond forcefully to the many aerial attacks against Iranian and other Shiite targets in Syria and Iraq, which tend to be attributed to Israel. As one senior Israeli security official told Al-Monitor on condition of anonymity, “We believe that this time, we are not talking about a feeble reaction like the random fire of retaliatory rockets, which generally fall on the Syrian side of the Golan Heights. Recently, the Iranians have already proved that they are capable of causing great pain, and that they are able to penetrate air defenses to cause considerable damage.”

The senior Israeli official’s remarks refer to last month’s coordinated attack on Saudi oil infrastructures in September 2019, using cruise missiles and armed drones. All indications and assessments resulting from coordinated efforts by Western intelligence agencies and the Israeli intelligence community indicate that the Iranian air force was responsible for this devastating attack. As the Israeli official told Al-Monitor, “The capabilities displayed in this incident are of serious concern, and demand that we respond. It is possible that our aerial and missile defense capacities will not be enough to prevent the Iranians from causing significant damage to vital infrastructures.”

An even more disconcerting development for Israel is the collapse of American policy regarding Iran. Stated more precisely, Israel is worried about President Donald Trump’s turn-about when it comes to applying pressure to Iran. This is obvious to anyone watching Trump’s behavior over the last few months, from his firing of national security adviser John Bolton, through his pleading for a meeting or even a phone call with Iranian President Hassan Rouhani, to the resignation of US Treasury Under Secretary Sigal Mandelker, who was responsible for sanctions against Iran. The terrifying predictions of senior Israeli security officials, which have been published here before, are being fulfilled at a rapid pace. Trump is losing interest in the Iranian issue and has even started to court the Iranians, in the hope that he will get the kind of “photo-op” that he can present as some kind of foreign policy achievement. By now, Israel’s defense establishment is already starting to miss President Barack Obama.

According to one scenario, presented here in an earlier article, the most disturbing question of all is what Israel will do if Iran decides to speed ahead openly with its nuclear program, while withdrawing loudly from the nuclear nonproliferation agreement. The current assessment in Israel is that Western intelligence agencies are putting together evidence that increases the chances of this horrific scenario actually occurring. If it does, Israel will find itself totally isolated on the Iranian front. Trump will be deep into his 2020 election campaign, but also the impeachment proceedings in Congress, while the Europeans will give Israel the cold shoulder, as will Russia and China. This could explain the urgent increase to the defense budget that Israel’s leaders are trying to push through.

For this to be the perfect storm, it is important to add Iran’s self-confidence, which is growing exponentially. Iran has hit Saudi Arabia’s national petroleum infrastructure, damaged oil tankers, shot down an expensive American drone and continued its war in Yemen without paying any price in the international arena. In fact, it may have benefited. Now, Iran has a growing score to settle with Israel after suffering dozens of strikes in the region. Are the Iranians preparing a surprise for Israel this October? In an interview Sept. 29, Brig. Gen. Dror Shalom, head of the research division of Israel’s Military Intelligence (Aman), hinted at this possibility. Shalom even noted that an Iranian attack could be launched from Iraqi territory, where the Iranians have the infrastructure for rockets and missiles capable of hitting Israel.

The drums of war are beating across the Middle East at unusual intensity. At the same time, it is becoming increasingly clear that Netanyahu’s gamble on Trump could be one of the worst bets made by an Israeli leader.