Some Israeli security experts view the Iran nuclear deal and lifting of sanctions with cautious optimism, and consider upcoming elections a test case to see what path the Iranian people will choose. 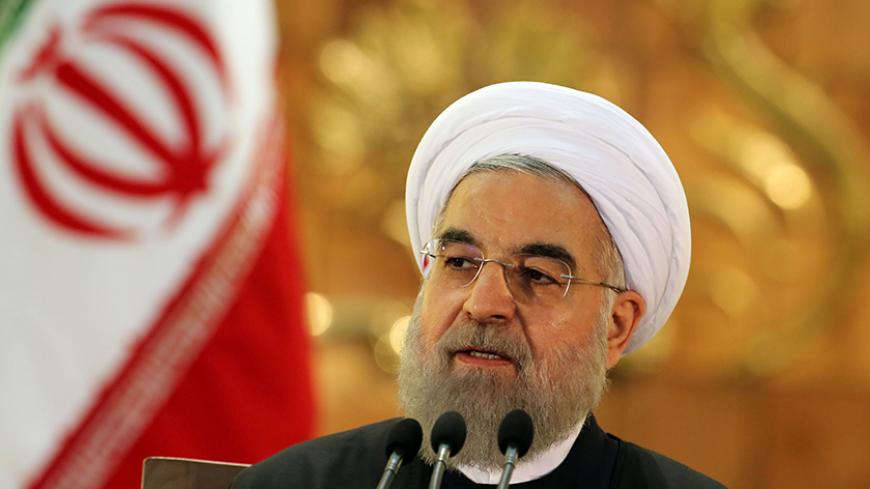 Iranian President Hassan Rouhani speaks during a press conference in the capital of Tehran after international sanctions on Iran were lifted, Jan. 17, 2016. - ATTA KENARE/AFP/Getty Images

Israel's response to the lifting of sanctions on Iran was typically acrimonious. Prime Minister Benjamin Netanyahu announced Jan. 17, “Israel will monitor the implementation of the deal and will notify of any violation.” He added that Tehran “has not abandoned its aspirations to acquire nuclear weapons and continues to act to destabilize the Middle East and spread terrorism throughout the world, in violation of its international commitments.”

Netanyahu doesn't really trust the international community, including the United States, to keep meticulous track of how Iran implements the commitments it made in the nuclear deal. At his induction ceremony, Netanyahu’s new Mossad chief Yossi Cohen declared that the risks inherent in a post-nuclear agreement Iran are even greater than before. As far as Netanyahu is concerned, Israel is the last watchdog defending the free world from Iran’s nuclear ambitions.

Most opinions among Israel’s defense establishment and the Israel Defense Forces are slightly different. Senior IDF officials speak of the nuclear agreement in very dissimilar terms, using concepts unlike those embraced by Israel’s political leadership.

“It is true,” confirmed one top military source, speaking to Al-Monitor on condition of anonymity. “There is not a single expert in the IDF who believes that the Iranians have abandoned their nuclear aspirations. On the other hand, international pressure, sanctions and the clandestine campaign have induced them to sign the nuclear agreement, and it is our assessment that they will implement it meticulously. The agreement creates a 10- to 15-year window, which provides us with an enormous opportunity. We are talking about a strategic turning point. For the last 15 years, Iran has followed a steady vector leading to nuclear capacity. Now it has all been blocked, rolled back and frozen at a reasonable distance from that goal. This is real news.”

This is heresy, as far as Netanyahu is concerned. Even if the prime minister had similar thoughts, he would never admit it publicly. He is committed to one single agenda and always sees things from one angle. The perspective with which Israel’s security establishment — the IDF, the Mossad, military intelligence, the Shin Bet and other branches of the defense forces — assesses the situation is purely professional. They see a much more complex picture, replete with advantages and disadvantages. While they may not admit it publicly, at this particular stage, the advantages of the agreement with Iran outweigh its disadvantages.

“The agreement removes the Iranian nuclear threat from the agenda for 10 to 15 years,” said another senior defense official on condition of anonymity. “That is a lot more than an Israeli military attack or even an American assault would achieve. An achievement of this magnitude must not be belittled.”

As far as conventional weapons are concerned, Israel’s military establishment is almost as worried as the political leadership.

“In its initial stage, the agreement allows $100-150 billion to flow to Iran,” said a third senior military official on condition of anonymity. “We must not forget that the vision of the Revolutionary Guard’s Quds Force has not changed. They aspire to spread [former Supreme Leader Ruhollah] Khomeini’s teachings and to destroy Israel. Over the next few years, Iran will be wealthier, more daring and more dangerous. We will witness these efforts in Iraq, in Lebanon, Bahrain, Yemen, Syria and even in Gaza. Hezbollah’s financial crisis has become increasingly apparent over the past few months, but it is likely to end now. These are hardly positive developments for the region. It is like pouring oil on a fire.”

But the overall picture is a lot more complicated than the billions of dollars that Iran may or may not pour into its efforts to bolster international terrorism.

“Armies and intelligence forces have weaknesses,” said one of the Israeli sources. “They size up the decision-makers and top commanders of the opposing side as well as its military capacities. It is harder to evaluate deep trends within society itself. This is true of Iran as well.” He is referring to the upcoming Iranian parliamentary election scheduled to take place Feb. 26. The IDF regards this election as a pivotal event that could indicate in which direction the Iranian people are heading. Within Iran, there is a historic clash of titans between two conflicting trends: continued domination of the revolution by the Quds Force and generals like Qasem Soleimani, or the desire for normalcy and the good life shared by the overwhelming majority of the Iranian people — who, according to most Western experts, are now fed up with the Islamic Revolution.

A top Israeli intelligence official told Al-Monitor on condition of anonymity, “We saw this trend in the 2009 riots, which were suppressed with considerable force. The ensuing election of [President Hassan] Rouhani was evidence that the real will of the Iranian people had not changed. The people want freedom. Right now, we don’t know what will happen in the elections for the Majlis. Will the Quds Force be able to stir the pot and tilt the results in their favor?”

Another area where it is possible to identify signs of the structural conflict between the forces of Iranian radicalism and supporters of normalcy within the country is the attitude toward losses suffered by Iranian forces in the war with Syria. According to information that has reached the West, Iran has contributed some 2,500 elite Islamic Revolutionary Guard Corps troops to the fight in Syria. They have suffered about 170 casualties, with hundreds more (between 300 and 400) wounded. As a result of these losses, Tehran has ordered at least some of these forces home, replacing them with Shiite volunteer militias from Iraq and Iran.

“It was surprising to see the Iranian sensitivity to casualties,” said an Israeli official. “We did not expect that. This is an important statement. Iranian society is drawing closer to normalcy and Western values. The ability to throw thousands of troops into a campaign and sustain heavy losses can no longer be taken for granted. The process is fascinating.”

It is interesting to note the similarities between top Israeli defense officials’ assessment of Iranian society and that of the US administration. The fundamental argument between President Barack Obama and Netanyahu is that Netanyahu contends that the nuclear agreement could perpetuate the rule of the ayatollahs, providing them with hundreds of billions of dollars to revive the economy and reinforce the regime at this particularly critical juncture. In contrast, the Americans claim that drawing closer to the West and opening the Iranian economy — and society in general — to Western influences under the agreement are the elements that could expedite a process of internal change in Iran and bring the revolution closer to an end.

The Israeli defense establishment does not dismiss the American approach entirely. According to some analyses, the money that Iran stands to receive over the next few years will not be enough to really revive the Iranian economy and improve the living conditions of the average Iranian who is now struggling. According to these assessments, those precise circumstances pose the greatest threat to the regime.

“None of us would bet on where things will go from here. We have no way of knowing,” a senior Israeli intelligence source told me this week on condition of anonymity. “In this business, not everything is a precise science. There are a lot of unknowns that are hard to anticipate. All that is left for us to do for now is to take a good look at next month’s elections, and on that basis, try to understand what direction the country is taking.”