Following Iranian elections, Israeli security experts are divided between those optimistic about changes in the country and those who fear its growing regional hegemony. 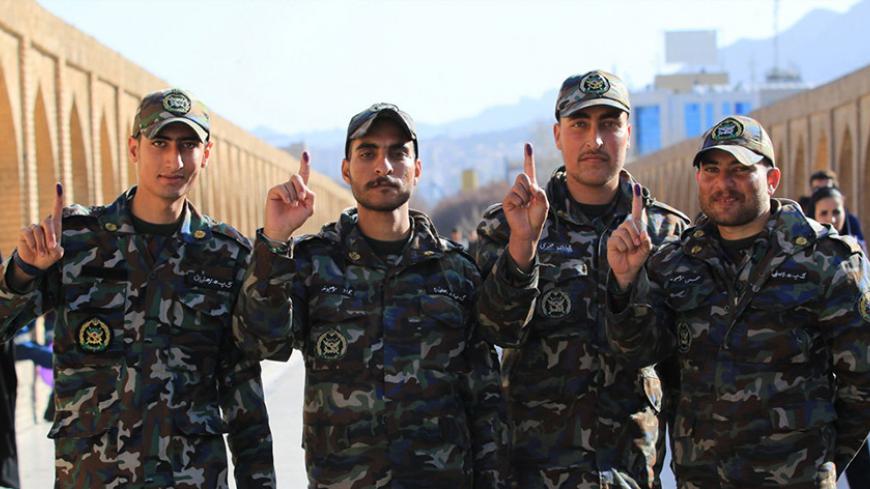 On Jan. 18, about a month before the 2016 legislative elections in Iran, Israeli Chief of Staff Lt. Gen. Gadi Eizenkot said, quoted by military sources on condition of anonymity, “Our eyes are fixed on election day in Iran. After that day, we will be able to attempt to understand what direction Iran is headed, what are the underlying currents in Iranian society and how these currents will influence what will be most dominant in the coming years: [Iranian] Reformists or Islamists.” Eizenkot characterized the situation with great precision: All the branches and arms of the Israeli intelligence have stretched themselves to the limit in their attempts to pinpoint, understand and analyze what will take place in Iran on Feb. 26, election day for the parliament and the Assembly of Experts.

It’s not as if anyone in Israel dared hope for a real political revolution. “No such scenario exists,” admits a high-placed Israeli security source, speaking to Al-Monitor on condition of anonymity. “We can’t fool ourselves into thinking that one day the ayatollah regime will simply collapse. Even the harbingers of revolt in 2009 did not arouse great hopes in the West, because the Iranian regime is still buttressed by great power and [its leaders] do not hesitate to use force to preserve their survival.” If so, what is so fascinating about what’s going on in Iran now?

Eizenkot defines the internal situation in Iran as “a battle of titans between two approaches: the hard-line [extremist] approach, headed by Supreme Leader Ayatollah Ali Khamenei and Maj. Gen. Qasem Soleimani of the Quds Force, and the moderate, pragmatic and open approach of President Hassan Rouhani and his people. According to intelligence sources in Israel and the world, the results of this struggle will determine Iran’s image in the coming decades. There are voices in the Israeli security establishment who argue that even if Iran does change direction, it may not necessarily be due to revolution. “Even if the steering wheel of a ship changes only slightly toward a certain direction, this may lead to a change in the ship’s course after many kilometers,” said a senior Israeli intelligence source talking on condition of anonymity. “Even now we identify very interesting changes of Iranian behavior and rhetoric in certain things that are happening that are surprising all the Western observers.”

A classic example of this is the fact that Iran has withdrawn its Islamic Revolutionary Guard Corps that fought in Syria alongside Syrian President Bashar al-Assad and Hezbollah forces and returned them to Iran. Initial publicity of this trend appeared a few months ago. The information was conclusive, yet Tehran denied it. At the time, senior military sources talking on condition of anonymity verified to Al-Monitor, “At least half of the Revolutionary Guard that fought in Syria have returned to Iran’s borders.” On Feb. 28, two days after the elections, Israel’s Channel 2 Middle East analyst Ehud Yaari announced that the Quds Force of the Revolutionary Guard had completed their withdrawal from Syria and that, currently, no Revolutionary Guard soldiers remain fighting alongside Assad in Syria. Analysts in Israel do not deny the possibility that the decision to recall the Iranian fighters from Syria may have been influenced by the relative victory of the Reformists in the Iranian elections and the blow to the hard-liners, which strengthened the camp of President Hassan Rouhani.

“One way or the other,” said a senior Israeli military source speaking on condition of anonymity, “We are witnessing a real internal drama [in Iran]. We are surprised to reveal high sensitivity to the loss of human life among President Rouhani and his people: The fact that almost 200 members of the Quds Force were slain in Syria, and at least 400 of them wounded, is not accepted so easily in today’s Iran. These are not the days of the war against Iraq in which the Iranian people accepted harsh losses on a daily pace. [Now] the regime is more attentive to human feelings, considerations are becoming more pragmatic in Western terms, including sensitivity to the loss of human life. All this is good news.”

In general, developments in Iran are assessed by Israeli intelligence, according to a source speaking on condition of anonymity, as “welcome and refreshing, in the right direction.” But according to Eizenkot recently in private discussions, “No IDF [Israel Defense Forces] expert thinks that the Iranians have abandoned the nuclear vision. The concerted efforts of the covert battle and international sanctions led them to sign the agreement with the world powers and carry it out religiously. What was created is a window of 10 to 15 years in which a strategic change took place. For the first time, Iran’s nuclear program stops advancing and instead is being rolled backward, to the freezing point. This window constitutes a great opportunity, not only for the West and Israel but also to the entire Iranian nation.”

On Feb. 26, the Iranian people finally had their say. True, most of the Reformist candidates were disqualified by the authorities and those who remained were only partially Reformist in nature, as reflected in Hooman Majd’s article in Al-Monitor. Still, the direction is clear.

“Now it’s official,” said a senior Israeli intelligence source speaking on condition of anonymity. “The Iranian people are not on the same page as the ayatollahs or the Islamic Revolution. The Iranians want to live, to bring up their kids with dignity. They want to earn a living and enjoy openness to the world, culture and freedom.” The question is, how the Iranian nation will realize all these desires. And this, they say in the Israel Defense Forces, we’ll see in the coming decade. Will it be a “decade of great change” in Iran or will a strategic turnabout take us by surprise to return everything to the starting point?

There are also pessimists in the IDF. One of them, a very high-placed officer who spoke recently with Al-Monitor on condition of anonymity, said, “Israel hasn’t had good experience with empires coming from the East. Throughout all the generations, they have given us much grief. In general, Iran’s human capital is much more powerful than human capital in the Arab world. The nuclear agreement sends hundreds of billions to Iran, which will allow the ayatollahs to construct the new Persian Empire. The Iranian opponent today constitutes a totally different order of magnitude than what we coped with in the past, and not only in the nuclear context. They have human capital — the Persian civilization is much more developed than the Arab one. They have more than 70 million citizens and tremendous natural resources: crude oil, gas and more. The Iranian regime is strong and steadfast, their Revolutionary Guards are big business with tremendous economic abilities and powerful political influence. The Basij [the Iranian paramilitary volunteer militia under command of the Revolutionary Guard] will not disappear tomorrow morning.”

He continued, “For dozens of years, they [the Iranians] have been deeply indoctrinated with anti-West combat ideology, and they detest everything symbolized by the West. It is not at all clear that the optimistic forecasts will materialize. It is not clear that they will smile back at the Western world that smiled to them this year. What remains for us is to continue to watch and wait.”

These two outlooks exist in Israel as well, as evident in this article: optimism and pessimism. At the moment, the day after Iranian elections, the optimists have the upper hand. And this is certainly a refreshing change.