Gideon Saar of Likud has put Likud Chairman Benjamin Netanyahu on notice that he is after his job and might not wait until Netanyahu steps aside before making a play for it. 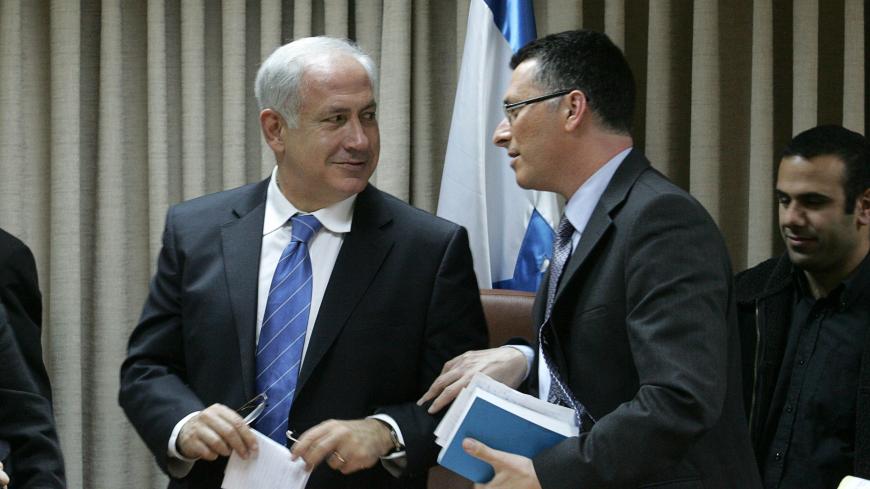 Gideon Saar's sharp criticism of Israel's cease-fire with Hamas and Islamic Jihad was in fact a public announcement that he is running to chair the Likud and is not waiting for Prime Minister Benjamin Netanyahu to wrap up his term. “The cease-fire, in the circumstances it was reached, brought Israel no achievements,” Saar tweeted May 5. “The time spans between the violent attacks on Israel and its citizens are getting shorter, and the terrorist organizations in Gaza are growing stronger between them. The war was not prevented but postponed.”

Saar’s criticism was in effect aimed directly at Netanyahu, who has become the only decision-maker on foreign and security affairs in Israel. Even when Netanyahu calls the Security Cabinet, any decision made reflects his will.

Netanyahu quickly responded to Saar through “sources in the Likud,” who accused Saar of having joined forces with the left: “Since 2015, when he attacked the Likud and the prime minister incessantly, Gideon Saar has had one goal: to take down the prime minister and chairman of the Likud, Benjamin Netanyahu. The excuses change, the goal doesn’t. Gideon Saar doesn’t give even a moment of credit to the prime minister and immediately joins the attacks from the left by [the Blue and White's] Benny Gantz and Tzivka Hauzer, who defected to the left and is at Saar’s command and continues to coordinate with him.”

Hauzer had served as Cabinet secretary in Netanyahu’s second government (2009-2013). In the April elections, he held the 14th slot on the Blue and White list and during the campaign leveled sharp criticism at Netanyahu and his public conduct. Saar rejected Netanyahu’s claim, tweeting, “Ridiculous on the level of the ‘plot of the century,’” referring to an earlier run-in with Netanyahu.

The current Saar-Netanyahu conflict recalls the previous rounds between them. Just last October Netanyahu accused Saar of plotting a “coup” with President Reuven Rivlin, whereby Rivlin would charge Saar, rather than Netanyahu, with forming the government in the event that Likud won the 2019 election. Saar denied the allegation and accused Netanyahu of crossing red lines and conducting a field trial against him. Netanyahu reprised the accusation during the Likud primaries in February to harm Saar’s chances of getting a spot high on the Likud’s Knesset list. Saar claimed that the prime minister and his family were persecuting him and threatening Likud activists and Knesset members who dared attend his events.

Netanyahu’s “campaign” ultimately failed, with Saar emerging from the primary fourth on the party list. A degree of peace was later achieved when the two met tête-à-tête, and the Likud celebrated a “historic reconciliation.” Loyal as ever, Saar distributed a photo of himself shaking hands with Netanyahu and captioned “Together towards Likud victory.” Later, after US President Donald Trump’s announcement recognizing Israeli sovereignty over the Golan, Saar gave all the credit to Netanyahu and the Likud government.

When it recently became clear that Netanyahu had no intention of giving Saar a ministerial role befitting a senior Likud member, Saar's gloves came off. According to a senior Likud source, Saar’s criticism of the cease-fire with Hamas was meant to inform Netanyahu that he now has internal opposition in the party, unlike during his last term. Also according to the source, Saar, who had previously declared that he would run to lead the Likud only after Netanyahu steps aside, is now prepared to run directly against the prime minister. Saar is not alone.

During the election campaign, criticism of Netanyahu was heard from those considered closest to him. In a recording of an internal Likud debate, Knesset member David Bitan was heard expressing anger about the numerous spots Netanyahu had promised to people on Likud's list. After the election, Bitan said he was disappointed in Netanyahu on many issues. Another Netanyahu loyalist, Culture Minister Miri Regev, received a talking to by Netanyahu after she said that she had voted for Saar in the primaries and after she indirectly complained that she had not been invited to be in a photograph of senior Likud leaders.

Saar has several loyal supporters among Likud Knesset members, most of them on the more liberal side of the movement. They include Michal Shir and Sharren Haskel and others who do not wish to be publicly identified with Saar.

There is an air of tense anticipation among senior Likud members concerning roles in the next government. It seems that senior portfolios, like defense, finance and education, will be given to other parties, which would exacerbate the current discontent in the Likud. It is possible that some of the disappointed would join the Saar camp.

The differences in the Likud also have to do with Netanyahu’s autocratic style and his refusal to share important decisions on foreign and security policy with senior leadership. Ideological issues — including delays in construction in the West Bank, the evacuation of the West Bank Palestinian village of Khan al-Ahmar and especially Netanyahu’s moderate response to Hamas — could drive internal opposition against him.

In a few months, Netanyahu is expected to face indictment for bribery and breach of trust, pending a hearing. That will present the big test for Saar and his associates. The initiative by Netanyahu supporters to amend existing law on immunity to benefit Netanyahu is distasteful to many in the Likud, but they will vote against amendment only if they know that they have sufficient backing and a strong enough bloc advocating such a position. If indeed a bill is brought before the Knesset, Saar must decide whether he will lead the camp against it, protesting the attempt to save Netanyahu from criminal prosecution through a maneuver unlikely to survive review by the High Court, or whether he will fall in line with the coalition and rejoin the struggle against Netanyahu on another stage.

Netanyahu is aware of all of this and will try to isolate Saar and his camp by granting ministerial jobs to Saar rivals. Thus, for example, he promised the Foreign Ministry to Yisrael Katz. Meanwhile, Saar is gathering supporters around himself. He is careful not to attack Netanyahu on personal affairs, for which the prime minister has backing among the Likud, and thus confines his criticism to ideological issues in an attempt to outflank Netanyahu from the right.

The Likud of the last Knesset, aside from perhaps Benny Begin, acted like a herd of yes-men, willing to do almost anything their leader asked. The current Likud will be different, if only for the fact that there is now a leader for the internal opposition.

Correction: May 13, 2019. An earlier version of this article mistakenly identified MK Keren Barak as a Sa'ar loyalist.