Prime Minister Benjamin Netanyahu’s associates are negotiating the composition of the next government, yet they are not hesitating to demand that the future coalition partners support legislation on immunity. 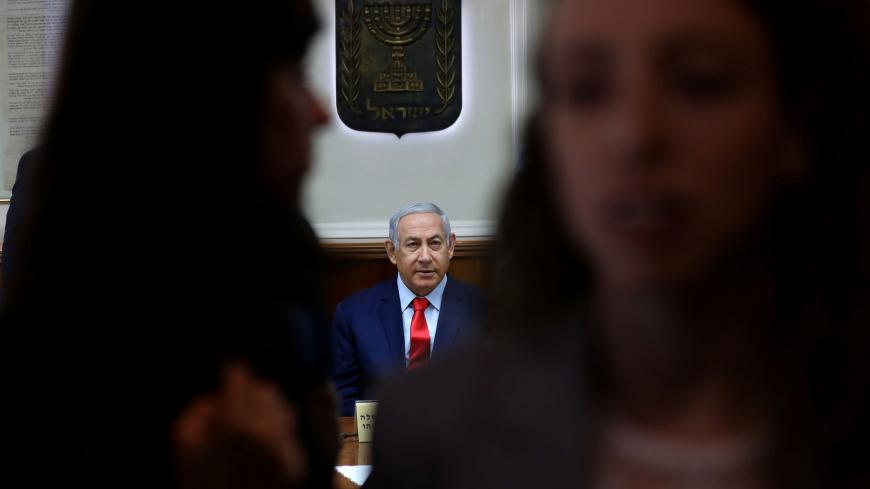 “I’m telling you, I haven’t got involved with this … and I don’t believe I will get involved with this,” Prime Minister Benjamin Netanyahu declared on March 23. He was responding to Channel 12 interviewer Keren Marciano's question on whether he would advance legislation granting him immunity from prosecution if reelected April 9. “My associates brought this up without my knowledge,” said the man suspected of bribery and breach of trust. Netanyahu continued to play dumb during the surprise interview he gave ahead of the elections.

Let us assume that the prime minister’s allies went behind his back to initiate “a legal reform” designed to keep him out of jail. However, according to what he himself admitted to in the interview, he has been aware — at least since end of March — that his associates were trying to promote legislation that would place his personal interest far above the public’s. He should have instructed them to stop their disgraceful efforts rather than appointing them as ministers in the government he is forming, or as chairs of Knesset committees. Instead of ordering them to stop, he has authorized them to conduct negotiations on his behalf with his prospective coalition partners.

Netanyahu did not condemn or even deny that his “get out of jail” card, and that of other Knesset members suspected of criminal wrongdoing, is the focus of contacts his associates are conducting with the ultra-Orthodox and right-wing parties known as the Likud’s “natural partners.” His associates are well aware of past Supreme Court rulings that struck down Knesset committee decisions granting immunity to lawmakers accused of corruption violations such as bribery or breach of trust. The court has ruled on several occasions that the committee was authorized to reject a lifting of immunity only if it was convinced that the attorney general had indicted a certain Knesset member out of political or other inappropriate considerations.

Tourism Minister Yariv Levin, who heads the Likud party’s negotiating team along with Natan Eshel, the Netanyahu family’s yes man, are now attempting a preemptive strike. They are demanding that any agreement with potential government partners to form the next coalition include support for legislation preventing the Supreme Court from overriding laws and government decisions on the grounds of irrationality and disproportionality. In fact, the current proposal is even larger than previous controversial proposals for an override clause, as it refers not only to Knesset laws but also to government administrative decisions. Such legislation, known as “the expanded override clause” would be the death knell of the separation of powers, one of the basic principles of any enlightened democratic regime.

Attorney General Avichai Mandelblit has announced plans to indict Netanyahu on charges relating to abuse of power and authority in order to promote personal interests, pending a hearing. Now, the Likud leader and/or his representatives are abusing the power voters granted the party in the recent elections to advance Netanyahu’s private interests.

Attorney Joshua Shofman, who served for 14 years as deputy attorney general for legislative affairs, told Al-Monitor this week that if the immunity issue comes up within the coalition contacts and is reflected in agreements among the future government parties, the attorney general might have to intervene. “Any involvement by Netanyahu in attempts to change the immunity law could be perceived as a conflict of interest,” Shofman said. “I assume that the reason he keeps saying that he is not dealing with this issue is that he does not want to tie himself in any way to those who are dealing with the issue with the fairly declared goal of preventing his indictments,” he added. He noted that not only does the Likud have to present all written agreements with its coalition partners to the Knesset prior to a vote of confidence in the new government, it must also notify the Knesset whether there are any oral agreements related to the formation of the government.

Another issue before the coalition negotiators, which also relates closely to Netanyahu’s personal interests, has to do with the Knesset vote on the appointment of the next state comptroller, expected on June 2. In an opinion piece on May 13 in Haaretz, Maj. Gen. (res.) Yaakov Or, who served as deputy director-general of the state comptroller’s office, and attorney Shlomo Gur, formerly director-general of the Ministry of Justice, pointed out that the state comptroller was in charge of examining the conflict of interest declarations of prospective ministers and deputy ministers. The two, members of an NGO dedicated to public probity, noted further that the comptroller is the one who appoints the Permits Committee authorized to grant ministers waivers on various issues. “This is a powerful position and one of great personal responsibility, as we are seeing these days,” they wrote in a barely veiled reference to the committee’s rejection of Netanyahu’s demand for a waiver that would allow him to accept funds from a wealthy cousin for his legal defense.

During deliberations on Netanyahu’s request to receive money from his cousin, steel tycoon Nathan Milikowsky, and an additional businessperson, certain facts came to light, raising suspicions of a conflict of interest between Netanyahu’s position as finance minister in the past and his cousin’s Israeli business holdings. In January 2019, Comptroller Joseph Shapira asked Attorney General Mandelblit to check why Netanyahu had received $300,000 from Milikowsky without reporting it to the Permits Committee. The comptroller provided Mandelblit with a document detailing allegedly false reporting by Netanyahu since being elected prime minister in 2009 regarding his personal assets.

On May 13, the Permits Committee notified Netanyahu’s legal team that it would not reexamine his request to accept money from his cousin until he revokes his previous refusal to provide it with information regarding his assets in Israel and abroad, without exception. The committee also instructed the prime minister to provide detailed explanations regarding the nature of his links with the prospective donors, the extent of his legal fees, details of the fees paid to his lawyers so far, and an explanation of why he requires help from others to fund his legal defense.

This summer, a new state comptroller will be entrusted with the keys to the Netanyahu family’s declarations of capital. Knowledgeable sources say this could also be the key to Netanyahu’s exit door from his office with its comfortable armchair to the hard courtroom bench.