Legislation proposals on immunity and to limit the authority of the Supreme Court, both advanced by associates of Prime Minister Benjamin Netanyahu, are angering many in the Israeli political arena and beyond. 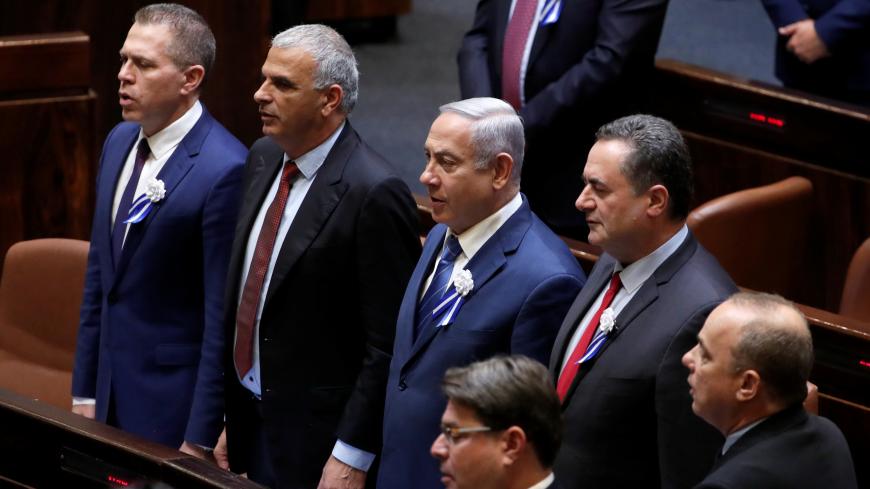 Controversy has arisen in Israel over a campaign by Prime Minister Benjamin Netanyahu's associates for an immunity law and to override the authority of the Supreme Court. In other words, Israel is now speeding headfirst toward a constitutional crisis — as was previously reported by Al-Monitor. This, in turn, could drag the country into a social-political collision between the two opposing factions.

According to all the signs, this collision could take the form of a widespread protest movement or even a popular revolt. Such a movement would make the 2011 social justice protests — which involved a million Israelis, the largest demonstration in the history of the state — look like a walk in the park. "We will set the streets on fire," say the Blue and White party leaders, who have been organizing a massive demonstration in Tel Aviv to take place on the night of May 25. The opposition party’s highest echelons swear they will not allow Netanyahu to become Israel’s almost omnipotent Erdogan without a fight. "We’ll fight for our values, for our political viewpoints, for democracy," they say. Senior members of the party, led by former Chief of Staff Gabi Ashkenazi, were already photographed holding a poster that read “Waive my immunity” — a reference to the tremendous efforts made by the prime minister to secure immunity vis-a-vis the indictments piling up against him.

Opposition Chairman and head of Blue and White Benny Gantz declared in his maiden speech in the Knesset that “Netanyahu holds himself above everything (i.e., above the law), and we shall fight in the squares, in the neighborhoods, in the schools, in the media and in the legal arena.” Gantz’s words and images were reminiscent of the United Kingdom’s Winston Churchill “We shall fight them on the beaches’’ speech at the beginning of World War II — a reference that was no coincidence.

Obviously, no one in Israel would even think to accuse a rival political party in Israel of any linkage to Nazism. Still, the Churchill reference illustrates what is already clear to both sides — that Israel is facing a decisive social battle. It also makes it clear that the outcome of this struggle will decide the character of the Jewish state: whether the rule of law will prevail as well as the supremacy of the courts and the liberal values as expressed by the state’s founders. The alternative is conservatism, extremism, erosion of democracy, and that the supremacy of the regime and of religion will continue to gain power.

One side is led by Netanyahu followed by fanatical rabbis, ultra-Orthodox Hassidic leaders and the radical right; the other side is led by Blue and White followed by liberal Israelis, people of the center-left and democracy. Both sides view the approaching collision as the decisive, conclusive battle for hegemony. In such an atmosphere, nothing good can happen.

The protest against Netanyahu’s new legislative initiatives has been growing and widening in numerous sectors. Four Likud Knesset members — Gideon Saar, Michal Shir and two additional Knesset members whose identities have not been made public — have already announced they will not support the immunity law. By doing so, they join former high-placed Likud officials such as Limor Livnat and Benny Begin, who expressed similar opinions. Netanyahu tries not to leave fingerprints on the initiatives themselves and instead uses proxies to support the immunity initiative. For example, Likud Knesset member Miki Zohar and United Right Knesset member Bezalel Smotrich both swear poor Netanyahu has no connection to the initiative. There are even people who believe them.

Following the political protests, senior Israeli attorneys woke up and quickly organized a conference — the first of its type. Dozens of attorneys, some of who are Israel’s finest and most experienced, convened in one of Tel Aviv’s largest offices and said they would use all their power to fight any efforts by Netanyahu to crush the High Court of Justice and legal system. The slogan of the struggle is “You will have to get past us” on the way to crush the principles of the rule of law. Among the protesting attorneys is, for example, Pinchas Rubin, who was appointed to run Netanyahu’s defense team. It was published on May 22 that more than a hundred law lecturers from various faculties created a “coalition for the rule of law,” including professors Yoav Dotan of Hebrew University and Yedidia Stern of Bar-Ilan University.

Simultaneously, a group of Israeli businessmen and entrepreneurs announced they will consider cutting back on their contributions to the Israeli community and social-justice activities should Netanyahu’s legislative plan be implemented. The most salient member of this group is Izzy Sheratzky, businessman and president of Ituran, who has invested hundreds of millions of shekels over many long years into the northern frontier town of Kiryat Shmona. “If this stuff continues,” Sheratzky said, “I will halt my donations.” Similar words were also heard from Yehuda Zisapel, the founder and president of the RAD-Bynet Group who is viewed as one of the fathers of Israeli high-tech; and Yossi Maiman, one of the former backers of Channel 10 and an active figure in the Israeli economy. The coming days will probably see many more movers and shakers add themselves to the list.

Currently, people are placing much hope on the demonstration due to be held in Tel Aviv over the weekend. The Blue and White party hopes to draw hundreds of thousands of participants who will make it clear to Netanyahu that he has crossed all red lines and violated all rules. “Defensive Shield for Democracy” is the slogan of the demonstration, which is also drawing additional parties such as Labor and Meretz, the Israel Democracy Institute and additional public social justice organizations.

Blue and White is investing efforts to include at the demonstration a prominent Israeli-Arab figure to address the crowd. The party learned its lesson from the recent April 9 elections. “We cannot win elections here without the Arab sector,” a senior Blue and White member told Al-Monitor on condition of anonymity. “The time has come to internalize that. There are hundreds of thousands of Arabs in Israel who are loyal to the state and its values and who want to have influence, and they are not connected to the exaggerated involvement of Arab politicians in the Palestinian issue. We have to focus on them and invest in them,” he said.

Despite everything described here, Netanyahu’s train continues to race toward immunity. In recent days, people surrounding the prime minister have hinted that he may agree to forfeit an amendment to the immunity law on the condition that he receive immunity in the framework of the current law. This is altogether possible on the condition that Netanyahu commands a Knesset majority on that issue.

“The problem is not the immunity law,” a senior Likud source told Al-Monitor on condition of anonymity. “The problem is Netanyahu’s far-reaching proposal against the High Court: the Override Clause," the source said. This legislative revision would enable the Knesset and the government to bypass the High Court’s rulings in some cases. In fact, it will prevent the court from invalidating Knesset laws and interfering in administrative decisions of the Knesset. The intent here is to prevent the High Court from invalidating the immunity the Knesset intends to bestow on Netanyahu. “This is a radical, deplorable change,” the same Likud source says, adding, “It is a process that basically nullifies the judicial review powers of the High Court over the government.” Why, then, aren’t the Likud Knesset members objecting to this political game that is designed to satisfy Netanyahu’s personal needs? The Likud interviewee refused to answer.

The answer to the question above is simple: Netanyahu just canceled the cap on the number of ministers in his new government — assuming he will be the one to assemble it. This means he can appoint as many ministers as he wants. Everyone wants to be a minister; everyone wants a rise in status. Meanwhile, to our great misfortune, all the Knesset members are willing to sell out their country’s values in exchange for the privilege of becoming a minister.