Can Israel’s Blue and White party get people into the street?

If Benjamin Netanyahu’s fifth government takes steps to keep the prime minister from facing a criminal trial, it will be necessary to bring hundreds of thousands of people to Rabin Square to protest at what is happening to Israel’s democracy. 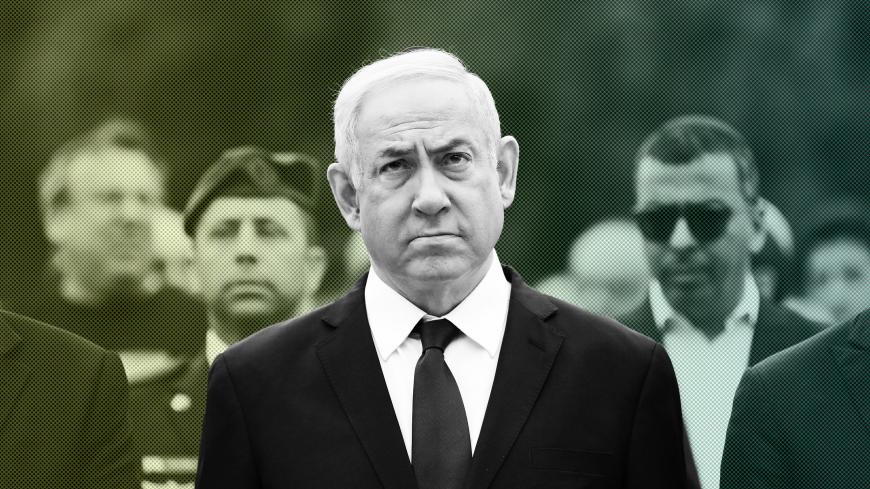 Prime Minister Benjamin Netanyahu is busy these days with negotiations to form the next government. Israeli law offers the person tasked with forming the government 28 days to negotiate, and he can ask from the president for another two weeks to complete his task. Netanyahu just asked President Reuven Rivlin for these extra 14 days.

The 28-day period is ending May 15, and no coalition agreement has been signed yet. So when the extra time that Netanyahu requested in order to form his government finally runs out, it will be his old coalition partners who will give up a significant portion of their demands and ask to join his government. Almost none of them could find a better government for themselves, but they will still try to pressure Netanyahu to give them the best Cabinet portfolios and agree to their other demands, knowing that Netanyahu tends to fold under pressure. They realize that he is especially pressured this time around, facing an indictment.

Netanyahu himself is not very excited about the new government he is about to form. He would rather take advantage of an amendment to the law, which he introduced in 2009, just a few months after he was reelected prime minister. Until then, it required one-third of a Knesset faction’s members to be allowed to leave their faction without receiving the party’s approval and without infringing on their rights as Knesset members. Netanyahu’s amendment allowed for a group of seven Knesset members to leave their party, even if they do not constitute one-third of all its members. At the time, he argued that this was one of a series of new laws intended to improve “governability” in Israel. Actually, he was trying to lead a group of at least seven Knesset members under Shaul Mofaz from the now-defunct Kadima party to leave their party and join his coalition. Though Mofaz did not leave Kadima, the amendment remained in place. Now, it could help Netanyahu if at least seven members of opposition party Blue and White quit their faction and join his coalition.

While Netanyahu’s representatives are involved in intense discussions with representatives of the ultra-Orthodox, right-wing and far-right parties, the prime minister has also been sending signals to various Knesset members from Blue and White. The first name released in this context was ultra-Orthodox Knesset member Omer Yankelevich (No. 23 on the Blue and White Knesset list). On the other hand, it will not be easy for the Likud to convince anyone from Blue and White to leave their current political home and commit to a vote that would allow Netanyahu to avoid a trial and punishment. In contrast, Netanyahu’s “natural partners” have long given him their promise on this issue. The United Right party even went so far as to list a change to the Knesset Member Immunity Law as one of its own conditions for joining the coalition.

In other words, even if Netanyahu’s emissaries manage to find seven “righteous people” in Blue and White, who would agree to quit their brand-new party and join the Netanyahu coalition, if they will not swear under oath to vote for any law that would keep Netanyahu out of criminal court, Netanyahu will have no choice but to prefer his current immunity coalition. In that case, he will have to grant its members the kind of concessions that will leave him sick to his stomach.

In the event that Netanyahu is forced to recreate his outgoing coalition, and if Blue and White manages to maintain its current size, Benny Gantz’s party will have to focus on one single issue: impeding every attempt by Netanyahu to avoid standing trial. Presumably, this should not be too difficult. After all, it’s the only thing that holds the party’s members together. This became very obvious during the last round of violence in the Gaza Strip on May 4-5. The main criticism voiced by most members of the faction honed in on the alleged anemic Israeli response, rather than on Netanyahu’s vision of avoiding any agreement with the Palestinians no matter what the cost, and of his preferring Hamas over the PLO. The people speaking most on behalf of Blue and White happened to be its more familiar members — such as former Defense Minister Moshe Ya’alon and former Cabinet Secretary Zvi Hauser — and their views hadn’t changed since their days in the Likud. Yair Lapid was right behind them, sharing their views so as not, God forbid, to sound too far to the left. Ofer Shelah may be a voice of reason, who is intimately familiar with the situation, but in this case, he sounded like a minority of one in his own party. Gantz himself was less conspicuous than the others, and less decisive when he did speak out.

Opposition to Netanyahu was and remains the one real common denominator shared by this group of individuals (members of Blue and White). It desperately needs to bring this common bond to the forefront. This is why investing most of the party’s energy in preventing the transformation of Israel’s fragile democracy into a kind of authoritarian regime would be a natural course of action. The Blue and White party must invest its efforts in preventing Israel from becoming like the governments in power in Hungary or Turkey. In both those cases, there may be an election every few years, but whoever is elected runs the government as he sees best fit, silences opponents, controls the media and rewrites the law so that he can continue to rule, despite constitutional and judicial restrictions.

This is the meeting point between the clear political interests of a party with no significant common denominator uniting its members, and the very serious threat to the character of the State of Israel as a nation in which the law is more than just a recommendation and in which leaders are expected to be subject to decisions by those official bodies charged with ensuring that the law is implemented. Blue and White will be doing the right thing, not only for itself but also for the country as a whole, if it moves past idle threats such as Lapid's “We will make things miserable for the government,” and focuses on the political and particularly the public struggle to prevent Netanyahu from carrying out his plans.

Netanyahu is expected to be indicted pending a hearing. If Netanyahu can’t get out of the hearing, and if after that hearing Attorney General Avichai Mandelblit decides not to indict him, I can only assume that there will be a big legal battle, culminating in an appeal to the Supreme Court over an unreasonable decision. If that appeal is rejected, the whole Netanyahu affair will be over. On the other hand, if the new Netanyahu government rushes to amend the law pertaining to the immunity of Knesset members, or if, in the name of “government reform,” it tries some other ploy, it will be necessary to appeal to the millions of people who voted against Netanyahu in the last April election, and bring hundreds of thousands of them to Rabin Square in Tel Aviv to scream out in horror at what is happening to Israel’s democratic form of government. These screams could turn into a roar, and that roar could instigate change.

There was no way that Blue and White could have become the ruling party. That was true the minute they announced that they would not cooperate with the Israeli Arab population in any way to form a government, just as they would not cooperate with Netanyahu. Nevertheless, it won a very respectable number of seats, largely because so many people in Israel wanted to see Netanyahu out of office. It is quite possible that historians will say that the party’s only role was to force Netanyahu to face the same legal processes that anyone else in his situation would. Then the party could break apart, just like all the other centrist parties that preceded it.

On the other hand, it is also possible that a successful struggle, which brings the masses to an empty Rabin Square, will cause the Knesset members from Blue and White to undergo a kind of political boot camp together. It could even energize them and get them involved in other vital issues, which would bring about the kinds of political and social change that Israel so desperately needs.