Can Netanyahu split Blue and White?

Prime Minister Benjamin Netanyahu might attempt to encourage seven Knesset members from Blue and White to quit their party and join forces with him to secure a majority coalition. 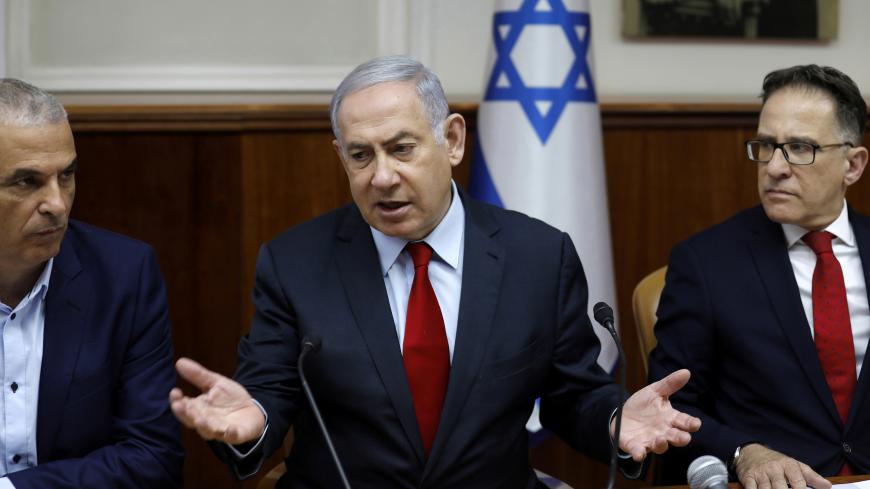 Despite the political mergers already finalized and those that might yet be made before the Aug. 1 deadline to submit candidate lists for the next Knesset, the center-right and the center-left blocs still appear to be gridlocked far from taking 60 of the parliament's 120 seats. While Benjamin Netanyahu takes pride in being Israel's longest-serving prime minister, the death knell for his political career could well be the decision by Yisrael Beitenu leader Avigdor Liberman not to join a coalition headed by him, unless part of a national unity government.

Netanyahu’s experience gives him a certain advantage over all the other candidates. He meddles in the affairs of the right-wing parties, encouraging this merger and discouraging that one. In some cases, his considerations are entirely mathematical, such as who won't pass the four-seat electoral threshold and thereby hamper the right’s chances of forming a new government. Other considerations involve whether his wife and son love or hate prospective candidates. That said, all Netanyahu's calculations really do is bring him back to square one: If Liberman continues to hold his current line, it will be impossible to form a right-wing government.

Since the founding of Blue and White ahead of the election held in April for the 21st Knesset, the most practical option would appear to be the formation of a unity government, but this means that Netanyahu would have to agree to the Likud recommending a candidate other than himself to form the next government, unless Blue and White wins more seats than the right, in which case President Reuven Rivlin would assign the task to Blue and White Chair Benny Gantz. Another round of elections is out of the question. The September election was the last trick in the magician’s hat, and it will be impossible to get a parliamentary majority to perform another suicide.

When examining the state of the Knesset, however, it turns out that there is a small window of hope for Netanyahu. It can be found across the aisle, among the 35 Blue and White Knesset members. When Blue and White submitted its list for the 21st Knesset, one of its leaders, Yair Lapid, was asked why there were no woman among the party’s leadership. In a moment of candor, Lapid confessed that decision-making about who would appear on the list had been a rushed affair. Three generals — Gantz, Moshe Ya’alon and Gabi Ashkenazi — sat with him for hours to discuss a long list of issues. It was only at the very last minute, just before the press conference at which they revealed their list, that they actually discussed Knesset candidates.

The result was very limited representation for women, the absence of non-Jewish candidates and younger candidates ending up on the far end of the list. Blue and White leaders did not bother to amend the list after the April 9 election, thus denying those at the bottom the opportunity to move up for the September balloting. This indicates that they have not attached any real importance to anyone without a leadership position. Netanyahu understands this well. As far as he is concerned, the most important thing is to figure out who among those candidates is least committed to the collective, is not turned off by the Likud or by him personally and would be willing to quit the party, form a new Knesset faction or join a coalition headed by him, and vote against lifting his immunity.

A 1991 law stipulates that for a group of renegade legislators to be considered an independent Knesset faction, they must constitute at least one-third of their party of origin. Given this, the only way for legislators leaving Blue and White to receive government posts and compete for seats on a Knesset list is if one-third of the party’s elected members decide to quit.

In practice, Netanyahu could exploit an amendment to that law. As it turns out, seven people, less than one-third of the Knesset faction, would be enough for Netanyahu. Why seven?

When Netanyahu was reelected prime minister a second time, in 2009, he wanted to bring Kadima, headed by Tzipi Livni, into his new coalition. At the time, Kadima had won 29 seats, compared to 28 for the Likud. Livni rejected his offer. Upon realizing that he would have a hard time convincing one-third of the members from her faction to join him, Netanyahu introduced new legislation making it possible to quit a party with just seven Knesset members leaving, even if they do not constitute one-third of the party. At the time, he found only six Knesset members willing to join him, so the party did not split. Nevertheless, the amendment remains in place.

One senior Likud member told Al-Monitor that Netanyahu believes that for now, there will be no significant movement of votes from the left to the right and that his engagement in efforts to prevent Ayelet Shaked, the newly elected leader of the New Right, from heading a merger of right-wing parties was more for personal reasons than political calculations. The most important thing for Netanyahu is to ensure that he has a safety net of at least seven Blue and White Knesset members. In short, after the September election, even if Gantz and his colleagues refuse to join a unity government headed by Netanyahu or in rotation with him, he can turn to the seven “renegades” and give them the kinds of jobs they could not dream of getting in a Blue and White government or one with Blue and White as a partner.

Netanyahu is known to be very generous when it comes to encouraging Knesset members to quit their parties. He gave Atzmaut, formed in 2011 by Ehud Barak with five Knesset members who quit the Labor Party, four (!) ministries, with Barak receiving the coveted Defense Ministry. The remaining Atzmaut member, Einat Wilf, was appointed chair of the Knesset’s Education Committee.

Past experience shows that this pattern could repeat itself. Netanyahu sees that his best chance for survival lies across the aisle. He is occasionally right too when a situation that seems unpredictable and even illogical becomes a matter of course all because of an offer that “can’t be refused.” That is what he's planning. With all eyes focused on party mergers and withdrawals, he has his eye on the rival camp.

A significant part of the Blue and White leadership consists of political novices. Some of them are unaware of this option, while the others don’t know what to do to stop it. Gantz and his colleagues must take this into consideration. Netanyahu is studying every name on their Knesset list, so they must also take a serious look at the dozens of people they suddenly propelled from obscurity into the Knesset, hold talks with each of them, pay attention to what they want and assure them that they will get twice as much attention after the election.

This is the soft underbelly that will appear after the next election. If Blue and White fails to close ranks, what might happen once the results are announced will be very different from all the obvious scenarios that the best pundits are repeating ad nauseam.