Netanyahu’s future coalition, the alliance of the underdogs?

Prime Minister Benjamin Netanyahu is struggling to cobble together a coalition that would guarantee him immunity, with partners who consider themselves underdogs in Israeli society. 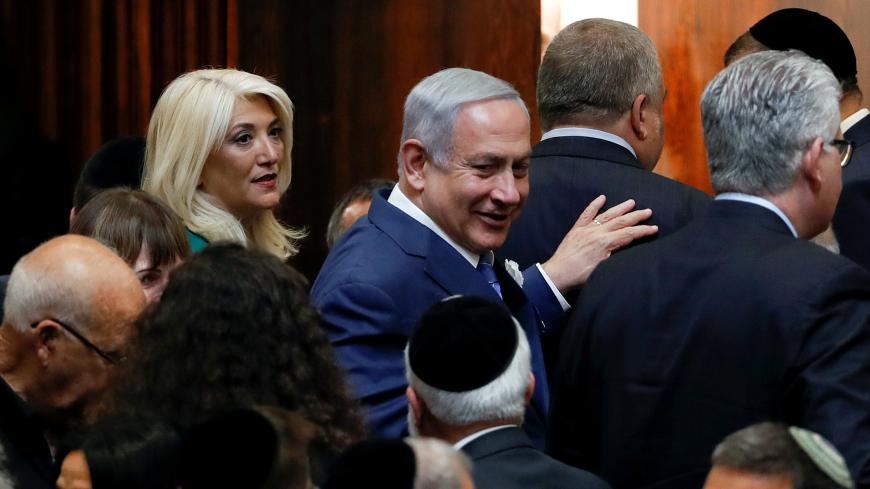 Prime Minister Benjamin Netanyahu desperately needs to conclude coalition talks by May 28. His future coalition should serve to protect him from impending indictment.

But the serious crisis encumbering coalition negotiations over the last few days has injected a modicum of hope into the opposition. The conflict between Yisrael Beitenu Chairman Avigdor Liberman and the prime minister gives the opposition reason to think that Netanyahu’s future “anti-immunity coalition’’ is crumbling. The fact of the matter is, however, that the current crisis has little to do with any planned legal reforms intended to keep Netanyahu from having to stand trial.

Actually, Liberman blew up the talks over the Conscription Law. The ultra-Orthodox parties are against Liberman’s draft law for ultra-Orthodox army enlistment. Liberman claims that ultra-Orthodox are trying to extort Netanyahu, conditioning joining to the coalition on changing that draft and canceling enlistment. These claims by Liberman and his insistence have plunged Netanyahu into a coalition dilemma with no easy resolution in sight. Still, Liberman is not taking a stand in defense of the Supreme Court. Nor, for that matter, does he have any plans to recommend someone else to form the government. At least that’s what he says.

This point is particularly important now, when there is a swell of protests against Netanyahu’s proposed “immunity laws” culminating in calls for popular revolt. The Blue and White party organizers of the “Defensive Shield for Democracy” protest in Tel Aviv on May 25 are hoping that their message will spread like wildfire in a field of thorns. The problem is that it is unlikely to reach beyond the confines of the center-left camp. True, the demonstration is inordinately important; it is essential for the health and well-being of a normal, democratic existence. Nevertheless, it must be viewed in a wider context in order to fully understand why it is having no real impact beyond the center-left.

The main reason is that even if a large swathe of the public will be taking to the streets against these legal reforms, an equally large public will not share that sentiment. Even if a large swathe of the public share an overwhelming feeling that the right-wing government is following the lead of Turkey’s Erdogan in the way that it is taking over the judicial system, an equally large public does not see it that way. Similarly, while an emergency gathering of the country’s top attorneys called on politicians to put an end to this blatant attack on the legal system, there were also lawyers on the other side of the debate. They may not be as prominent as their colleagues, but they still claim the legal system must be reformed (the way right-wing politicians are calling for). In fact, on May 21 about 100 of them signed a petition declaring that “automatic opposition to any changes with the excuse that they would lead to the end of democracy is harmful and mistaken. The legal system is not above the law. … We protest efforts to involve members of the legal profession in a political battle.”

Netanyahu’s “anti-indictment coalition” also gives voice to the overwhelming sense of alienation that people feel toward the justice system in one way or another. Netanyahu is a political fox, exploiting this mood to advance his own immunity. His target is a coalition of the moderate and extreme right, including the ultra-Orthodox and Russian immigrants (Yisrael Beitenu), all of whom regard the Supreme Court as an ivory tower and symbol of the old elites. Their electorate, consisting of about half of the Knesset seats — including almost four seats that the New Right party would hold had it passed the electoral threshold — is unlikely to take to the streets to protest the Supreme Court. On the other hand, these voters do identify with attempts to rein in the Supreme Court in one way or another and say as much at the ballot box. Taken together, this coalition of Israeli underdogs, representing various, diverse sectors of Israeli society, form a clear majority.

Take Liberman, for example. From the very beginning of his political career, he tagged the judicial system as an elitist, left-wing gild, which in his opinion victimized him in the courts until he was finally cleared of all charges in 2013. And yet, even that only came after a decade of legal proceedings against him. So he does not hide his bitterness toward the legal system. Using the proposed Override Clause to limit the power of the Supreme Court is something that Liberman and his supporters could certainly embrace.

Then there are the ultra-Orthodox parties — Shas and Yahadut HaTorah — with their 16 seats. They offer Netanyahu unequivocal support on this particular issue, based on their belief that the Supreme Court and the legal system at large are nothing more than a left-wing, secular gild. Meanwhile, Shas Party Chairman Aryeh Deri has been claiming that the courts have been persecuting him for more than two decades. He already served time in prison for corruption, returned to politics, took back his seat in the Interior Ministry and still found time to get tangled up again with the various enforcers of the law, this time for money laundering and fraud. Channel 13’s commentator for ultra-Orthodox affairs Avishai Ben Haim claims that the current Deri investigation is “a violent response by the elites against the most successful Mizrahi effort the country has ever seen to integrate into the democratic political system.”

Similarly, parties on the ideological right who lobby for and represent the settlers would not oppose imposing limits on the Supreme Court. The banner-bearer for these moves in the outgoing government was Justice Minister Ayelet Shaked. Their argument is that the legal system, led by the Supreme Court, has seized control of and interfered with the legislature’s authority, and the consequences of this are potentially dangerous. The New Right party that held this view was worth almost four seats in the last election. While this was not enough to pass the electoral threshold, the United Right party of Rabbi Rafi Peretz and Bezalel Smotrich are heirs to its legacy.

Kulanu Party Chairman Moshe Kahlon was thought to be the defender of the legal system in the previous government. Now, however, even he is singing a new tune. His faction’s chair, Knesset member Roi Folkman, said so explicitly on May 23, when he announced that he supports the Override Clause.

Last week, the Walla website released the results of a poll, showing that most of the public (56%) oppose granting Netanyahu immunity. When limited to just Likud voters, however, the results are very different. Some 80% of respondents believe that Netanyahu can continue to serve in office even after he is indicted.

Even within the center-left camp, there are a handful of lonely voices who have called for imposing limits on the powers of the Supreme Court. The most forceful advocate of this argument is former Justice Minister Haim Ramon, who has a reputation as a dove on diplomatic issues. According to Ramon, the Supreme Court has become increasingly political and has therefore lost the trust of large swathes of the public. “It is not too late to restore the balance between the various authorities. It should have been restored long ago, but better late than never,” Ramon tweeted on May 23. Still, Ramon remains an outlier in his camp.

The people who wish to curtail the powers of the court are not some radical fringe group either. Members of this stream are ideologues with a distinct political identity and stature. This group, which is just as big as the group bemoaning the end of democracy, regards the legal authorities as an out-of-touch, left-wing elite. In that sense, they constitute a cultural and ideological opposition within the center-left camp.

This is an important first test for the opposition. It must show that it has the stamina to keep its energy up in the coming months and the ability to shift the public agenda.