The political fate of Prime Minister Benjamin Netanyahu and the feasibility of a national unity government are now in the hands of the Israeli Supreme Court. 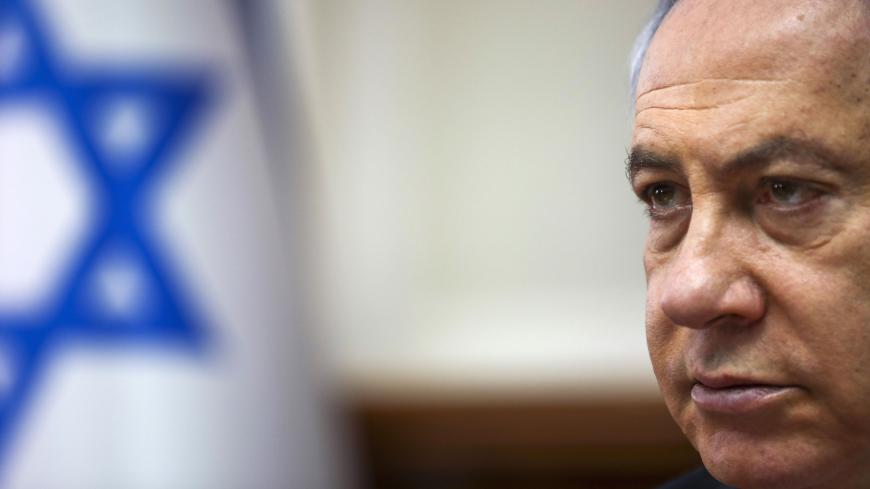 The wild Israeli political ride is nearing a crucial junction, with one path leading to a power-sharing government led by the Likud's Benjamin Netanyahu and Blue and White leader Benny Gantz, and the other to a fourth round of elections or some other form of chaos. This is the timetable: On May 3, an expanded lineup of 11 Supreme Court justices will convene to consider several petitions demanding that they disqualify incumbent Prime Minister Netanyahu from forming Israel’s next government and arguing that his April 20 coalition agreement with Gantz is unconstitutional. Sunday’s deliberations will focus on whether a person under criminal indictment is eligible to form a government, and the following day will be devoted to petitions against the agreement itself, which includes amendments of two fundamental laws that anchor the authority of Israel’s government and the legislature.

In an April 30 opinion to the court, Attorney General Avichai Mandelblit conceded that the coalition deal “entails agreement on a new model of government that is not natural to Israel’s form of government,” but argued that its flaws fall short of requiring the court’s intervention. If the court does not make speedy rulings, the coalition's house of cards could come tumbling down.

In an unusual move, the court hearings will be broadcast live. They are scheduled to wind up on Tuesday, May 5, two days before the legal deadline for forming a government. Should Netanyahu inform President Reuven Rivlin that he does not have the endorsement of 61 Knesset members for a new government, Israelis will return to the polls, probably in August, for the fourth time in 17 months. Adding to the tension, there is no deadline for the justices to rule on the petitions, which bring up intricate issues.

The justices will probably rule on Tuesday, leaving Gantz and Netanyahu sufficient time to complete the complex and unprecedented legislation required to implement the coalition agreement and form a government before the May 7 deadline. If they fail, Netanyahu will apparently ask Gantz to obtain the signatures of all his party’s Knesset members on a request to President Rivlin to approve the agreement before the Knesset has passed the required legislation. Gantz will face a tough choice. By agreeing to Netanyahu’s request, he would grant him 14 additional days to form a government, and Netanyahu would no longer need the Blue and White once the lawmakers’ signatures are in his pocket. Netanyahu could then renew his pressure on a handful of Blue and White lawmakers to jump ship and join a narrow government under his leadership, reneging on his deal with Gantz, as he has done to other putative allies throughout his political career.

Two weeks ago, just prior to reaching agreement with Gantz, Netanyahu tried to tempt a few rival lawmakers. He offered the moon to two Gantz allies, Labor leader Amir Peretz and Knesset member Itzik Shmuli, and the stars to two Blue and White Knesset members, Zvi Hauser and Yoaz Hendel. His overtures were rebuffed, but will they be again two weeks from now, with the threat of new elections hovering over the four lawmakers? Gantz faces a Hobson’s choice. If he refuses to hand Netanyahu a blank check with the signatures of all his party’s lawmakers, he could find himself dragged into a new election race, battered by voters accusing him of selling them out by agreeing to join forces with Netanyahu to begin with, in violation of his pledges. On the other hand, if he signs the check, he could find himself left high and dry.

The justices now hold the fate of the coalition agreement, the future government and the political system in their hands. Their ruling will also affect the top court itself and the war that Netanyahu and his emissaries have declared on Israel’s judicial system. More than a few unsubtle threats have come from their direction in recent weeks, warning that should the court disqualify Netanyahu “contrary to the democratic choice of the Israeli public,” millions will take to the streets in protest. Some threats by Netanyahu associates sound quite explicit, warning that if the court “takes the law into its own hands” and disqualifies Netanyahu, it would be signing its own death warrant. According to them, Netanyahu would run once again in a fourth election, achieve a clear and unprecedented majority, immediately push through an override clause giving the Knesset authority to overrule the court, hammering the final nail in the court’s coffin. It will be not just another blow to the court’s legitimacy, but a deep erosion of its independence, authority and standing.

The two halves of the Israeli electorate is utterly polarized. One believes Netanyahu is the messiah sent to save Israel who must be protected at all cost. The other is convinced that Netanyahu is destroying the foundations of Israel’s democracy and rule of law vital to the continued existence of the Jewish state as established by its founders.

Most legal scholars expect the High Court to be sharply critical of Netanyahu’s expected premiership as well as of the coalition agreement enabling it, and perhaps disqualify some of the agreement’s less significant clauses, but not invalidate the core of the deal. Any ruling that undermines Netanyahu’s ability to form a government or to hand over the premiership to Gantz after 18 months according to their rotation agreement would immediately dismantle the coalition and send Israelis to the polls. The High Court is unlikely to venture into such dangerous territory.

Mandelblit's opinion points the way for the justices: criticism of the agreement and of Netanyahu’s assault on the rule of law, but a determination that “there is no legal impediment” to implementation of the deal. Any other ruling would send Israel into uncharted waters. It is perhaps the heaviest responsibility facing the court since its founding. The High Court holds not only the fate of the petitioners and respondents in its hands, but of Israeli democracy.