In Netanyahu's quest for survival, all options on the table

Losing the elections in September would likely spell the end of Prime Minister Benjamin Netanyahu's political career and possibly his personal freedom, which is driving him to make every effort to cancel the vote. 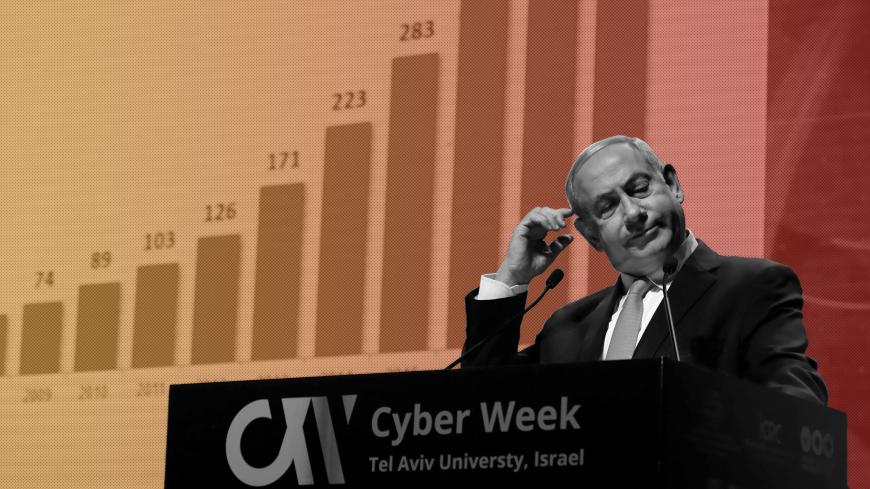 On May 29, Prime Minister Benjamin Netanyahu forced the just-elected Israeli Knesset to dissolve itself and set a date, Sept. 17, for new elections. Netanyahu has spent his days and night since trying to think of a way to reverse that fateful decision after realizing that another round of balloting, only five months after his April 2019 election victory, could be a disaster.

Disbanding parliament just days after lawmakers had been sworn in was a Hobson’s choice. Netanyahu's legally mandated deadline for forming a new government expired at midnight on May 29, and he was out of options. Technically, he should have handed the mandate back to President Reuven Rivlin, who might then have asked another Knesset member to try his or her hand at forming a government. By law, Rivlin could have tasked the job to another Likud lawmaker or even tapped Netanyahu’s rival, Blue and White Chair Benny Gantz. Either way, it would have spelled the immediate end of the Netanyahu era.

It would not have simply been the end of Netanyahu's political career, but probably a personal catastrophe as well. Netanyahu has sworn to fight pending criminal indictments against him from the prime minister’s seat; his path to prison for corruption could be far shorter as a former prime minister. Netanyahu does not want to end up like his predecessor, Ehud Olmert, who was jailed for corruption in 2016. He therefore had to, at all cost, foil the formation of the next government by anyone who was not Benjamin Netanyahu. Thus the newly installed Knesset had to commit suicide. The following day, Netanyahu realized that he had dug himself into a hole: On Sept. 17, he will have to muster enough votes to ensure a 61-seat majority in the 120-member Knesset without the support of former Defense Minister Avigdor Liberman, a seemingly impossible task.

The polls appeared increasingly grim. Liberman’s popularity, born of his refusal to join a Netanyahu government over the issue of ultra-Orthodox military conscription, was growing rather than plunging. The specter of being branded a “loser” loomed after 10 years in the prime minister’s chair, which he was loath to relinquish; Netanyahu had in May become the first Israeli prime minister to fail to form a government after winning an election and receiving the president's mandate. In light of impending fiasco, Netanyahu decided to try to reverse the Knesset’s dissolution and cancel new elections. So far, he has failed in this endeavor as well.

Although Netanyahu incited against the political left and Israeli leftists for years, he offered the Labor Party almost all his worldly possessions if it would join the coalition he was trying to cobble together. As the clock ticked toward the May 29 deadline, the offer became increasingly generous. At one point, Netanyahu agreed to make do with two Labor deserters, party Chair Avi Gabbay and second-place Tal Russo, but that failed as well. At the same time, he tried to entice the centrist Blue and White to join his coalition, even offering to split the premiership with Gantz in a rotation agreement. That, too, fell through.

Over the past two weeks, Netanyahu has broken every record, even trying to form an alliance with the 10 Arab Knesset members elected in April. Yes, the very same lawmakers Netanyahu had vilified and turned into public lepers suddenly became his potential lifeline. With political issues tossed overboard in the blink of an eye, Nathan Eshel, one of Netanyahu’s closest associates, penned two op-eds — one in the leftist Haaretz, the other in the right-leaning Makor Rishon — calling Israel’s 21% Arab minority the great hope of the right. Netanyahu was willing to give the Arabs many of his prized possessions as well, in return for their support on a law canceling the September elections and for their backing the minority government he would form immediately after passage. Knesset Speaker Yuli Edelstein led this unbelievable, chaotic scenario on Netanyahu's behalf. The bizarre plot did not, however, go anywhere, rising and falling within a week.

One thing has become abundantly clear: Netanyahu has no red lines, inhibitions or shame when it comes to fighting for his political life. On the other hand, there is also a limit to his legendary prowess.

The attempted alliance with the Arabs turned into a grenade that blew up in his face, generating sharp criticism from the right. The Arabs themselves remained silent, which made things worse. Pundits and opinion leaders from the religious right lashed out at the prime minister, which would have been unimaginable a few short weeks ago.

Nonetheless, it is worth remembering that Netanyahu is one of the best campaigners in Israeli history. He is creative, sweeping and full of ideas and capable of anything. His political rivals believe he might still have a surprise up his sleeve. Indeed, there are various options to choose from before Sept. 17. He could invite Chinese President Xi Jinping for a historic visit to Israel, engineer another photo-op with Russian President Vladimir Putin (who is reportedly planning to visit soon), and even drag his “secret weapon,” President Donald Trump, to Israel. Would that suffice? Hard to say.

Now that the prospects of a Knesset vote annulling the September elections appear nil, concern has turned to another, more sensitive issue: Might Netanyahu encourage a clash with one of Israel’s enemies to create a national emergency and force his political rivals to postpone the elections or form an emergency government? So far, Netanyahu has proven himself a cautious leader, strongly averse to military adventures. His caution is born mostly of his well-developed survival instinct.

Given Israel’s military conflicts over the past two decades, Netanyahu knows that any modern war in which Israel might engage would be unwinnable, even if it’s only a limited military clash and even with the best military force in the Middle East at his disposal. What makes the current situation more explosive is that Netanyahu’s personal survival is at the most fateful crossroad of his life, and he seems to be facing a dead end. The road has ended; his room to maneuver is blocked.

In recent weeks, the security and defense briefings provided by Netanyahu’s aides have become somewhat more hysterical than usual, offering up repeated warnings about a possible blowup on one or another front. Al-Monitor recently examined the possibility of Iran trying to engineer a clash with Israel to up the pressure on Trump. Netanyahu aides are beating the drums over such a scenario. This does not mean that Netanyahu is war mongering, but it does mean he is toying with the idea.

Israel is a state that could find itself at war at any given moment, without advance warning. The persistent friction with Iran and Hezbollah on its northern front could veer out of control, deliberately or due to human error or miscalculation. The southern front, with Hamas and Islamic Jihad lying in wait in Gaza, is sensitive and volatile. Netanyahu could also order the highly controversial, court-sanctioned evacuation of the small Palestinian village of Khan al-Ahmar in the hope that such a move would escalate into violence.

Such measures would run counter to Netanyahu’s longstanding record and perhaps his character, too. Nonetheless, with not only the prime minister’s seat at stake, but also his personal freedom, no option can be discounted. The coming 80 days, until elections, will be particularly sensitive.