President Reuven Rivlin made sure everyone knew he would have preferred to task someone other than Prime Minister Benjamin Netanyahu with forming Israel’s next government. 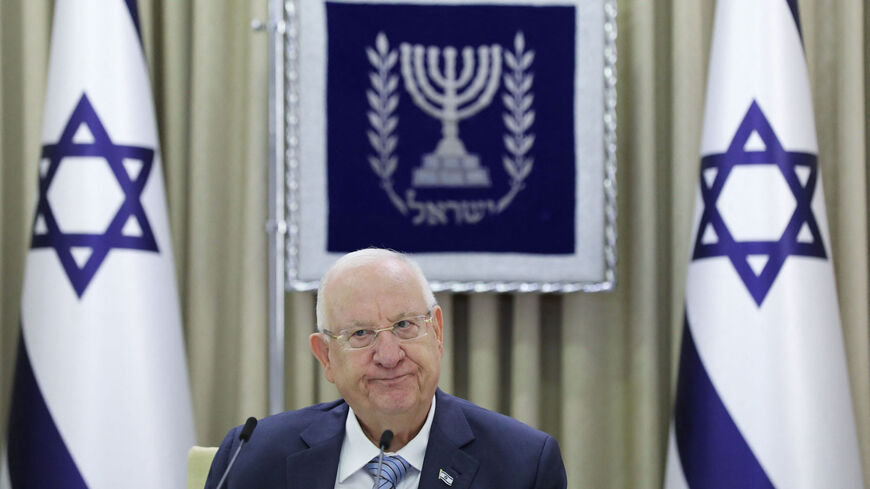 Israeli President Reuven Rivlin holds consultations on who will form the next coalition government at his residence in Jerusalem, April 5, 2021. - ABIR SULTAN/AFP via Getty Images

Rivlin would have preferred to task someone else with forming Israel’s next government, and he made sure everyone knew it. Because Netanyahu had more Knesset endorsements than the other candidates, he had no choice.

Rivlin gave Netanyahu the complex task under duress, making it clear that he was doing so with a heavy heart.

Political sources told Al-Monitor that Rivlin, 82, considered resigning to avoid tapping Netanyahu for the job for the fourth time in two years despite his criminal indictment and failure to form a stable government after four stalemated elections.

Rivlin’s view of Netanyahu as a threat to Israeli democracy and its institutions is no secret. Rivlin displayed his displeasure in no uncertain terms. “This is not an easy decision on a moral and ethical basis, in my mind, and I fear for my country,” he told the cameras April 6.

In a departure from protocol, Rivlin did not invite Netanyahu to his house, the official residence of the head of state, for a ceremony granting him the mandate. Instead, the director of the residence went over to the prime minister’s residence on Jerusalem’s Balfour Street and handed the document to Netanyahu’s chief of staff. Rivlin's protest was only starting in avoiding a televised photo-op with Netanyahu, and it escalated in the ensuing hours.

Rivlin arrived at the Knesset that afternoon for the traditional swearing-in ceremony of the 120 newly elected legislators. He was welcomed by a mounted guard, a red carpet and festive music. An emotional Rivlin took the podium, occasionally choking up as he addressed the chamber and warned of the repercussions of the deep public divide.

In a break from tradition, Rivlin left the building right after his speech, clearly in order to avoid another photo op with Netanyahu. He absented himself from the traditional photo presenting the five heads of Israeli governance – the Knesset speaker, the president of the Supreme Court, the prime minister and the head of the Knesset opposition.

Rivlin was the first Israeli president to ever violate historic precedent so blatantly, and his protest did not sit well with many Israelis who saw it as divisive and offensive.

In his defense, Netanyahu has worked against him behind the scenes and tried to delegitimize him. Although Rivlin was a veteran member of Netanyahu’s Likud, Netanyahu campaigned unsuccessfully against his 2014 election by the Knesset, and Rivlin never forgave him. The two were careful to maintain dignified behavior in public, but as Israel’s political crisis escalated, their relationship deteriorated further.

Rivlin leaves office in June after a seven-year term overshadowed by his toxic relationship with Netanyahu, who has long suspected that given half a chance, the president would try to unseat him. Nonetheless, despite claims to the contrary by Netanyahu and his associates, Rivlin never violated his rights refused to task him with forming the government, doing so four times over the past two years.

Since the March 23 elections and the continued stalemate between the pro-Netanyahu and anti-Netanyahu bloc, Netanyahu’s people, led by Knesset speaker Yariv Levin, have been warning Rivlin not to let his personal politics affect his decision. Rivlin clearly felt that hais public display of anger was the only way he could protest this intimidation and express his concern for the country’s future.

However, his protest risks tarnishing his legacy. Netanyahu’s opponents accused Rivlin of being too soft, claiming he should have shunned precedent even though Netanyahu had the most Knesset endorsements and instead tapped Yamina chair Naftali Bennett or Yesh Atid chair Yair Lapid from the rival bloc.

Critics say Rivlin’s protest harmed the institution of the presidency, exacerbated the already difficult political climate and insulted Netanyahu’s Knesset sponsors, who represent more than two million voters. The president is the head of state, a largely ceremonial role but one that requires him to represent all the citizens of the state equally and to rise above personal hostility.

Former Knesset speaker Dalia Itzik, who served as interim president in 2007, was angered by Rivlin’s actions despite her alliance with the anti-Netanyahu camp. “With all due respect to the president’s residence, it is not the personal home of the president. … His behavior was undignified, and not for the first time. Is the president above the law? Who are you to decide what is right and what is not?” she asked in a radio interview.

Itzik holds that Rivlin’s actions sent a message that the votes cast for Netanyahu two weeks ago were not valid, saying, “I am very sad. The first day of the Knesset is an exciting day, with lots of new energy, and suddenly something so personal gets in your face.”