After receiving the mandate to compose the next government and after the swearing in of the 24th Knesset, Prime Minister Benjamin Netanyahu says he will form a government of action. 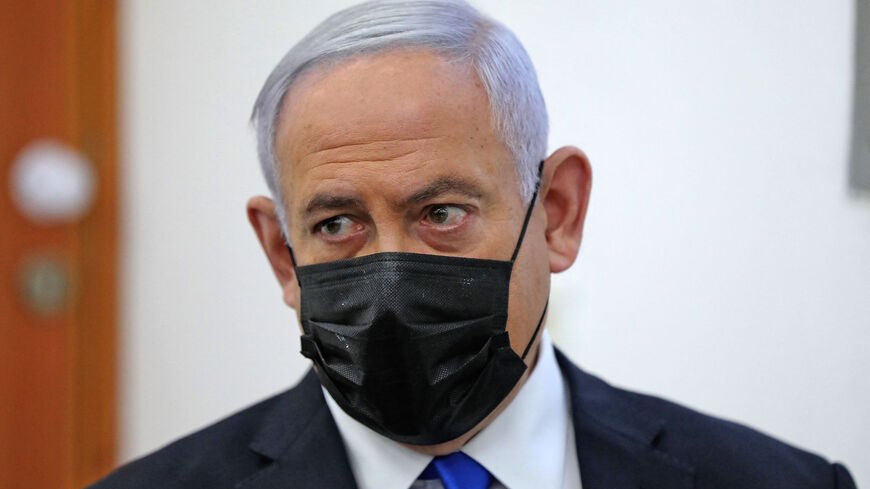 Israeli Prime Minister Benjamin Netanyahu attends the hearing for his corruption trial at district court in Jerusalem on April 5, 2021.

Prime Minister Benjamin Netanyahu, after being given the mandate to try to form the next government the morning of April 6, told the weekly Likud faction meeting at the Knesset in the evening that he will make every effort to end Israel's unceasing cycle of early elections.

Netanyahu said he would work for the establishment of a strong and stable government, saying, “This won’t be a government of paralysis, but rather a government of action. To do this, the government must be united, both in policy and action. And to create it, we must first end the personal boycotts.” Addressing Israeli Arabs, he said, “I see myself as the prime minister of everyone.”

Netanyahu also said he will work to get the country more coronavirus vaccines and pledged to continue efforts for more peace and normalization treaties with Arab countries. “It’s real. … It’s not an election slogan,” he said.

Yesh Atid leader Yair Lapid reacted bitterly to President Reuven Rivlin tapping Netanyahu for the job of forming the government. Lapid tweeted, “The president fulfilled his duty and had no choice, but handing Netanyahu the mandate (to compose the next government) is a disgrace that tarnishes Israel and casts shame on our status as a law-abiding state.”

The president selected Netanyahu, who was endorsed by 52 of the Knesset's 120 parliamentarians — nine short of a majority. Rivlin explained his choice by pointing out that Netanyahu had received the largest endorsement compared with his rivals. Only 45 legislators recommended Lapid for the task, while Yamina leader Naftali Bennett was endorsed by the seven members of his party. The 16 Knesset members from the New Hope, Arab Joint List and Arab Raam parties recommended no one.

After Rivlin’s announcement, Bennett said, “The reason I refused the offer to become prime minister this week is because I am true to my values. Working for the good of the people of Israel. I will work with all my might to form a government, which will be a right-wing and stable government and bring Israel to a safe shore. It is possible.”

Bennett wished Netanyahu luck in forming new government, saying, “We will leave no stone unturned on a mission to prevent fifth elections, but without sacrificing our values.” Israel has held four elections in the space of two years.

After the press conference at the president’s Jerusalem residence in the morning, Rivlin went to the Knesset, where Israel’s 24th parliament was sworn in. During the swearing-in ceremony for Knesset members, members of the Arab Joint List changed their declarations from “I swear” to stating their commitment to the end of “Israeli occupation over the West Bank, the apartheid, the Nation-State Law and racism.”