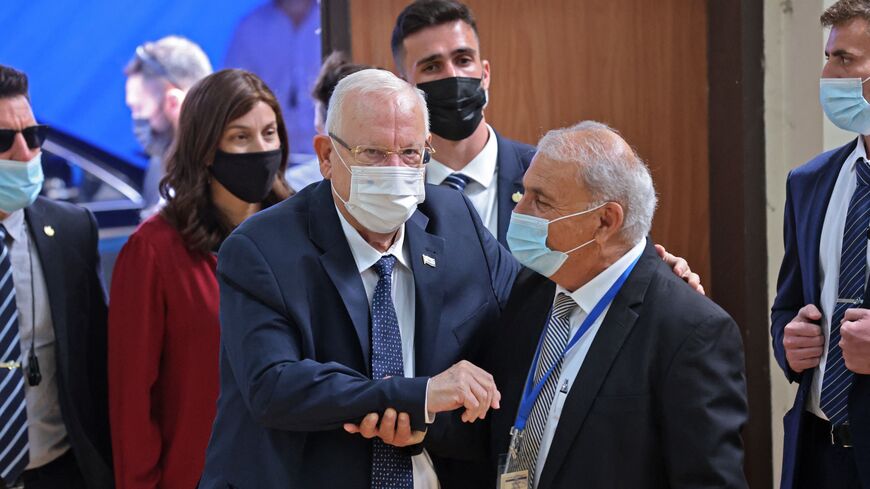 Israeli President Reuven Rivlin (C), wearing a mask for protection against COVID-19, is greeted outside a polling station where he voted on March 23, 2021, in Jerusalem in the fourth national election in two years. - EMMANUEL DUNAND/AFP via Getty Images

Likud lawmakers lashed out March 31 at Israeli President Reuven Rivlin, accusing him of cooperating with rivals of Prime Minister Benjamin Netanyahu and of encouraging them to promote an alliance against Netanyahu for the formation of a new government.

Anger against Rivlin erupted after the ceremony at his official residence where the head of the Central Election Committee, Supreme Court Judge Uzi Vogelman, presented Rivlin with the official results of the March 23 elections. Speaking at the event, Rivlin said, “I truly hope that the elected officials, representatives of the public, are able to hear the Israeli people's call for out-of-the-ordinary coalitions, collaborations across sectors, working for the good of all of Israel’s citizens.”

During the election campaign, Rivlin urged politicians to break the political deadlock that has lasted for over two years so as to avoid a fifth round of elections. But the term “out-of-the-ordinary coalitions” was interpreted by senior Likud officials as a call for political groupings to join forces against Netanyahu. Likud fears that the right-wing Yamina and New Hope parties will join the anti-Netanyahu bloc, as could the Arab parties the Joint List and Raam. Combinations of that sort could yield the 61-Knesset majority needed to form a new government.

Transportation Minister Miri Regev said after Rivlin’s remarks, “The president has a duty to respect the will of the electorate, to act as a statesman and to refrain from other considerations. It is not appropriate for a president who is ending his term in about a month to make decisions contrary to the tradition that has always been practiced — handing a mandate to form a government to whoever gets the most recommenders.”

The Likud won 30 seats in the election; the next biggest party is Yesh Atid with 17.

Likud Knesset member Shlomo Karhi said Rivlin should overrule his personal biases and follow the law by first calling on the top vote-getter to form a government. Karhi pointed to “the president’s personal ties and duty to [New Hope leader] Gideon Saar, the latter’s mission to overthrow Netanyahu, together with the president’s hostility to the most likely candidate, Netanyahu.”

The president's office issued a reaction to these accusations, saying it regretted the Likud remarks. “The remarks directed at the president by ministers and speaker of Knesset does not do them credit and it would have been better if they had not been said. As the president had said, the main consideration that will guide him in choosing the candidate to whom he will hand the task of forming the government is the candidate's chances of forming a government that will win the Knesset's endorsement. This is what all previous Israeli presidents have done for generations and this is how the president acted in all the previous election campaigns.”

The head of the opposition, Yesh Atid leader Yair Lapid, said, “The Likud's attack on the president is further proof that there are two possibilities: either the continuation of Netanyahu's rule and a savage attack on state institutions or joining the bloc of change and replacing the government.”

Rivlin's office has said he will start consulting with heads of parties April 5, for them to recommend who is most suited and likely to succeed in composing the next government. Rivlin will then task a candidate for that mission April 7.