What does the UAE expect from Egypt? 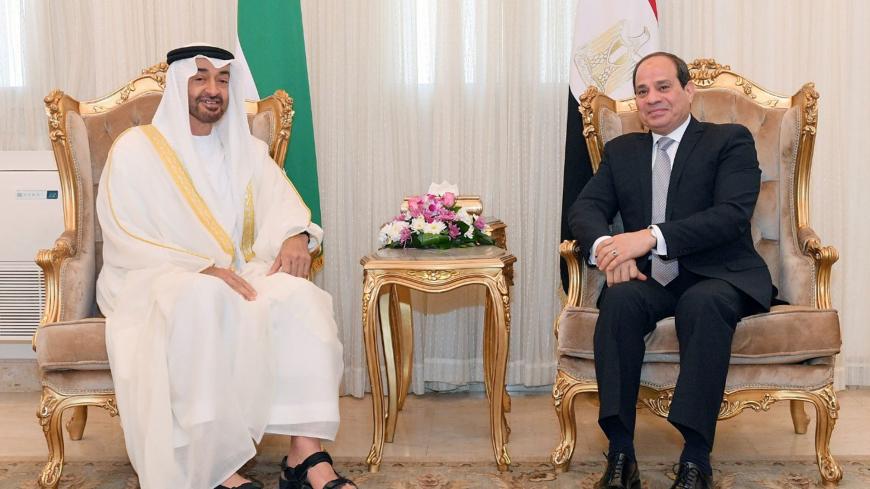 Investigations are underway to uncover the culprits of the May 12 sabotage attacks in the UAE. Meanwhile, two days after those attacks, the Saudi Press Agency announced that drones had targeted two pumping stations of a major oil pipeline in Saudi Arabia. A spokesman for the Houthis, Mohammed Abdul Salam, affirmed in a tweet that the Houthis claim responsibility for the incident.

The Egyptian president expressed Egypt's solidarity with the UAE and Saudi Arabia to counter all attempts to undermine the security and stability of the two countries in a May 15 statement. He further stressed that the security of the Arab Gulf region is an integral part of Egypt's national security.

Bin Zayed asserted the importance of continued coordination and exchange of views between Egypt and the UAE to address challenges and crises and to counter any interference aimed at destabilizing regional security. Bin Zayed emphasized Egypt’s pivotal role as a cornerstone of security and stability in the region.

Political analysts told Al-Monitor that the crown prince's visit comes in the context of the exploration of the Egyptian position on the tense situation in the Gulf, in particular increased tensions between the United States, Saudi Arabia and the UAE on the one hand, and Iran on the other.

Gulf tensions escalated after Saudi Arabia accused Iran of ordering the Houthis to launch the drone attacks on its oil facilities. Iran denies being behind the attacks. The Gulf is also witnessing “psychological warfare” — as described by media reports — between Iran and the United States, ever since Washington tightened sanctions on Tehran in early May.

Ahmed Youssef Ahmed, a professor of political science at Cairo University, told Al-Monitor in a telephone conversation, “The timing of the crown prince’s visit to Cairo is an important sign of consultation and exchange of views on the tense situation in the Gulf region and Iran. It is aimed to boost joint security and strategic coordination, given Egypt’s regional and international weight.”

“The main Egyptian stance on the current events in the Gulf is that Egypt is committed to defending the security of the Gulf as an integral part of the Egyptian security,” he added. “Egypt, however, is not drawn to any unjustified military action, but if the Gulf is attacked, Egypt is committed to protecting its security. Certainly there are contacts and consultations on the current tension in the Gulf.”

Egypt has strong relations with both Saudi Arabia and the UAE — relations that were further entrenched when Sisi took power in 2014. The three nations have a unified position regarding Qatar, as they all severed diplomatic and consular ties with the country in June 2017.

Tarek Fahmy, a professor of political science at the American University in Cairo, told Al-Monitor, “Sisi and Bin Zayed’s meeting sends clear messages to the regional parties about the Egyptian position in support of the Gulf countries. Cairo will not hesitate if Gulf security is endangered. On another note, the visit of the king of Bahrain to Cairo two days before the crown prince’s visit confirms these positions.”

Sisi discussed the consolidation of joint Arab action with Bahrain's King Hamad bin Isa Al Khalifa on May 12. They further discussed ways to address attempts to interfere in the internal affairs of Arab countries, according to a statement by the Egyptian presidential spokesman.

Egypt's Assistant Foreign Minister Mohammed Hijazi told Al-Monitor that Sisi and Bin Zayed's meeting aimed to contain the situation by avoiding irresponsible actions or bad intentions by some regional or international entities, which he did not name, who wish to push the region into a military confrontation. Such a confrontation, he said, would undermine the region’s development achievements.

“The escalation in the Gulf threatens the entire Arab national security," he said. "Regional or international initiatives must be launched to restore calm without pushing the region into a military confrontation. Egypt is qualified to play this role in light of the regional credibility it enjoys.”

The UAE’s Ministry of Foreign Affairs called in a May 19 statement for a united Gulf and Arab stance “in light of the imminent challenges and dangers.” The ministry praised Saudi King Salman bin Abdul Aziz's invitation to hold two emergency summits in Mecca between Gulf and Arab leaders to discuss the situation in the Gulf.

Egypt received an invitation to attend an Organization of Islamic Cooperation summit in Mecca at the end of this month. The Saudi ambassador in Cairo, Osama bin Ahmed Nugali, handed the invitation to Sisi May 18.

“Cairo will continue to support its brothers in the UAE and Saudi Arabia at the political and diplomatic level,” Fahmy said. “But it is too early to say if Cairo will send troops or participate in any military efforts at this time.”