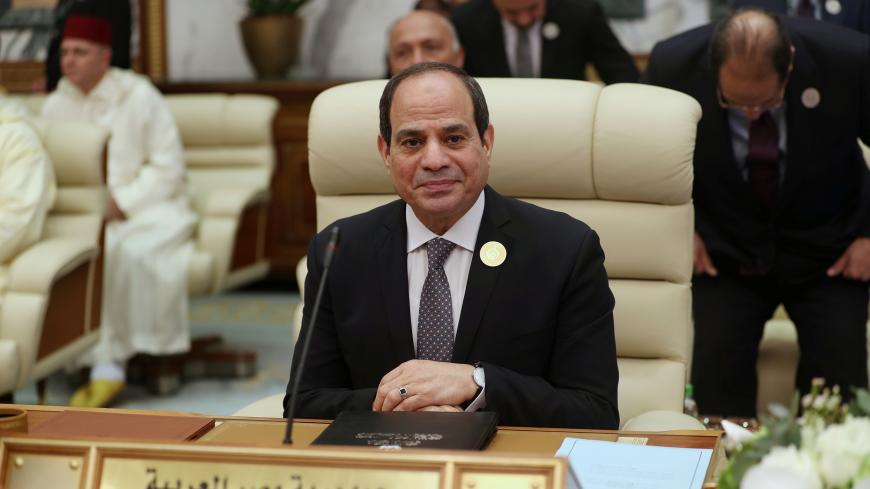 CAIRO — As tensions rise between Iran and some Arab countries in the Middle East, Egyptian President Abdel Fattah al-Sisi is proposing a four-point security plan. He spoke about the plan recently at an urgent Arab summit convened by Saudi Arabia in Mecca to discuss Iran's alleged role in recent attacks in the region.

During his May 31 speech, Sisi outlined the plan's four requirements to address threats facing Arab countries:

Relations between Iran and Saudi Arabia have been tense since the kingdom cut its diplomatic ties with Tehran in January 2016. Meanwhile, the UAE is considered a leading member of the Saudi-led military coalition supporting government forces in Yemen in their battle against the Houthis, who are backed by Iran.

The UAE said May 12 that four multinational commercial ships were “sabotaged” in its territorial waters in the Gulf of Oman facing Iran. On June 6, Saudi Arabia, the UAE and Norway sent a report to the UN Security Council on the initial findings of a probe into the attack. It said a state actor was behind the sabotage, without naming any country.

On May 14, Saudi Arabia announced that two oil pumping stations on the pipeline that transports Saudi oil from fields in the east to Yanbu port on the west coast were attacked by armed drones. Saudi Deputy Minister of Defense Khalid bin Salman accused Iran via Twitter of being behind the attack, for which Yemen’s Houthis claimed responsibility. The Houthis also announced they had launched drone attacks June 8-9 on drone bunkers at Saudi Arabia's Jizan airport, though the Saudis had not confirmed the report as of the 10 deadline June 10. They did confirm a similar attack May 26.

Tarek Fahmy, a political science professor at the University of Cairo, spoke with Al-Monitor by phone about Sisi's four-pronged approach outlining security challenges and risks in the Arab world.

“Although the vision is holistic, it still needs Arab political willpower and implementation mechanisms," Fahmy said. "The Arab League should uphold it, as should the key states in the region, like Saudi Arabia, Jordan and the UAE.”

Fahmy noted some potential obstacles to implementing the plan. For instance, Iraq, Syria and Qatar had their reservations regarding the closing statement of the summit, indicating a lack of consensus among Arab states on the security risks. In the statement, Saudi Arabia condemned Iranian practices in the region and Houthi attacks on Saudi territories. Iraq objected to the statement because Baghdad did not participate in writing the final draft and said that Iran is a neighbor of Arabs and its security should not be targeted. Syria also objected to the closing statement regarding Iranian intervention in Syrian affairs and asserted that Iran is present in the country at Baghdad's request. Qatar rejected the statement because some of the provisions conflict with Qatar's foreign policy.

Iran’s Foreign Ministry issued a statement May 31 denying all allegations against it.

Abdul Menhem Said, former director of the independent Al-Ahram Center for Political and Strategic Studies, told Al-Monitor by phone, “Sisi’s statement that Gulf security is part of Egyptian national security during the summit reflects a relatively new expression in his vision, and it's not common among Egyptian political leaders.”

Said noted that Sisi’s plan mainly aims to avoid any war with Iran. “I believe Egypt’s interest in Arab security stems from its intention to avoid foreign conflicts and focus on the domestic structure of the state. Thus, Egypt’s foreign moves with bordering countries, like Sudan, Libya and Palestine, are strictly limited to the necessary," he said.

“With countries that do not share borders with Egypt, the latter adopts a diplomatic and political approach to stop any wars in the region. This explains why Egypt outlined its vision in Mecca.”

Parliament Speaker Salah Hasaballah said in a May 31 press statement that the four elements of Sisi’s vision constitute a comprehensive mechanism to protect Arab and Gulf security.

Sisi seems to have expressed Egypt’s public opinion, with its various political, public and partisan affiliations and inclinations, in the strategy's second element, which underlines solidarity with Saudi Arabia and the UAE.

He added, “This requires activation of Arab anti-terrorism coordination mechanisms."