Egypt has expressed concerns over the growing Iranian threats in the region, fearing it might affect navigation in the Red Sea and the Suez Canal. 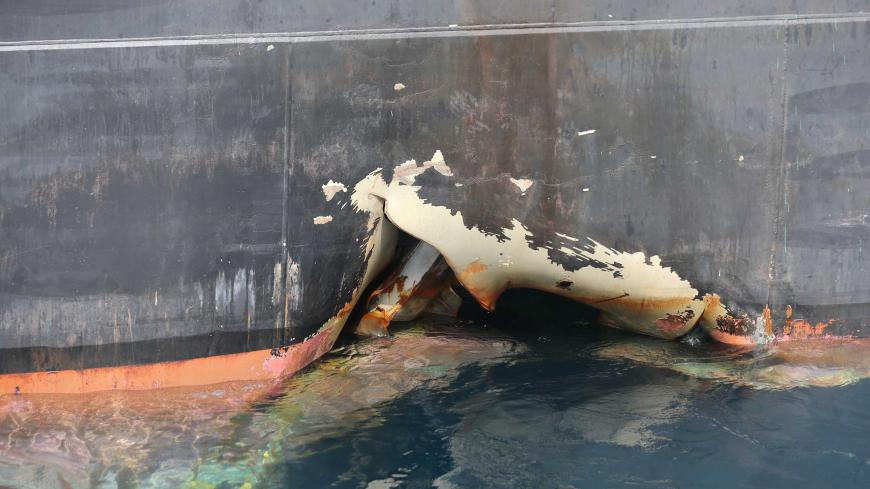 Damage to the ship the Andrea Victory is seen off the Port of Fujairah, United Arab Emirates, May 13, 2019.

The attacks on four ships off the coast of the United Arab Emirates (UAE) and two oil pumping stations in Saudi Arabia have raised many questions over Iran's threats to the region, a matter that may cast a shadow over Egypt's navigation in the Red Sea and the Suez Canal. Meanwhile, these regional developments were the focus of Egyptian President Abdel Fattah al-Sisi's recent meetings with Arab leaders.

On May 12, Sisi met Bahrain's King Hamad bin Isa Al Khalifa to discuss the means of giving an extra boost to the joint Arab action, especially in light of the challenges facing the region at the present time. The meeting also dealt with confronting any attempt to intervene in the internal affairs of Arab countries.

On the same day, four commercial ships, including two Saudi oil tankers, were damaged in a sabotage attack in the UAE without casualties. The UAE Ministry of Foreign Affairs and International Cooperation said the attack took place near its territorial waters, off the emirate of Fujairah. So far, the UAE has not specified who is responsible for the attack.

On May 14, Iranian-backed Houthi militants launched drone attacks on two of Saudi Aramco’s oil pumping stations, further ratcheting up tensions in the region.

Yemen's Houthi spokesman Mohammed Abd el-Salam claimed responsibility for the attack, saying it was a response to Saudi “aggression” and “genocide” in Yemen.

In a quick response, the Egyptian Foreign Ministry strongly condemned the attack, stressing Egypt's solidarity with the government and the people of Saudi Arabia in confronting all attempts to undermine the security and stability of the kingdom.

According to presidential spokesperson Bassam Rady, Sisi expressed Egypt's full solidarity with the UAE and Saudi Arabia, reaffirming that “the security of the Gulf region is part and parcel of Egypt's national security.” Both sides also expressed their support for the efforts to reach political solutions to the various crises in the region.

“Hampering ships' movements — whether by closing Bab el-Mandeb Strait by the Iran-aligned [Houthis] or shutting the Hormuz Strait — will definitely hit Egyptian navigation and consequently its economy. Egypt is fully aware of this scenario and adopts a diplomatic approach in dealing with Iran,” independent political analyst Ammar Ali Hassan told Al-Monitor.

The international community, namely the United States, will not stand idly by if these straits are closed, as they represent the world's most vital oil and natural gas corridor and most important shipping routes, Hassan said. The ships that cross the Red Sea and the Suez Canal go to Europe or the United States. “Therefore, Egypt knows Iran will think twice before making any decision related to these straits,” Hassan argued.

The Hormuz Strait is a waterway between the Oman Gulf and the Persian Gulf. Iran is located on the strait's north coast, while the UAE lies on the south coast. It is the main passage to transfer oil and gas from the Middle East to the United States, Europe and Asia.

As for Bab el-Mandeb Strait, it separates the Arabian Peninsula from the Horn of Africa. It is located between Yemen, Eritrea and Djibouti, and is also a vital shipping lane.

“The Iran-US tension is escalating as well. That is why Egypt and Gulf States share a common vision and adopt the same strategy in dealing with Iran, with the aim of maintaining good ties with the United States,” Hassan explained.

He said Iranian threats are not the only reason for boosting ties with the Gulf. “We have to remember the Arab Joint Defense and Economic Cooperation Treaty, which binds Egypt and Arab countries. Also, huge numbers of Egyptians are working in the Gulf States. Hence, Egypt is trying to cement ties with these countries,” he remarked.

In 2017, Sisi inaugurated a fleet in the Red Sea with the key aim of tightening control over its southern entrance. The southern fleet is equipped with rocket launchers and special naval units.

“Iran's recent attacks in the region are ringing alarm bells that we are entering a very sensitive stage,” Ahmad al-Awadi, member of the parliamentary Committee of Defense and National Security, told Al-Monitor.

These attacks do not only target Saudi Arabia and the UAE, but the whole region, Awady stressed. “Therefore, the security entities in the region should combine efforts to face any anticipated attacks,” he concluded.