Egyptian President Abdel Fattah al-Sisi received Yemeni Presidential Leadership Council President Rashad al-Alimi as part of his first foreign tour since his inauguration, amid efforts to consolidate the cease-fire and reach a solution that ends the crisis in the war-torn country. 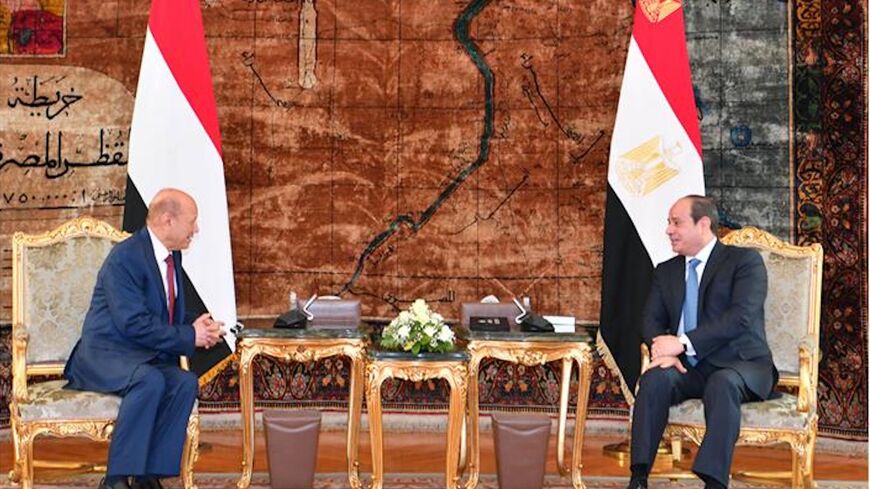 Egyptian President Abdel Fattah al-Sisi received Yemeni Presidential Leadership Council President Rashad al-Alimi as part of his first foreign tour since his inauguration, amid efforts to consolidate the cease-fire among conflicting parties and reach a solution that ends the crisis in the war-torn country.

The two sides discussed the latest developments in Yemen and ways to protect maritime security and freedom in the Red Sea. The talks also focused on the importance of enhancing cooperation between the two countries, mainly in infrastructure and energy projects.

In a joint press conference with Alimi, Sisi affirmed his country’s support for Yemen’s unity and stability and Egypt’s support for the Yemeni Presidential Leadership Council as part of its efforts to reach a just and sustainable political solution that brings about peace and ends the suffering in the country.

Sisi welcomed once again the extension of the truce in Yemen for an additional two months between the warring parties, which was announced by the United Nations earlier this month. He also called on all parties to fully implement the terms of the agreement. “It is a positive development that can be built upon to start a comprehensive political process in Yemen,” he said.

One of the current points of contention is the continued Iran-backed Houthi rebels’ siege on the city of Taiz and their failure to fulfill their pledges to lift this blockade under the truce agreement amid fears that the truce would collapse similar to the previous ones, while Yemenis struggle to survive.

Under the truce, military operations in Yemen and cross-border attacks in the war that has dragged on for seven years have halted, which helped alleviate Yemen’s humanitarian crisis that is causing millions of people to starve.

Under the truce agreement, Egypt agreed to operate direct flights between the Houthi-controlled capital, Sanaa, and Cairo. The first Yemeni commercial flight since 2016 landed in Cairo in early June. Sisi said that these flights are aimed at alleviating the suffering of the Yemeni people.

The war in Yemen has killed more than 150,000 people and displaced millions of civilians, according to the United Nations, which described the conflict as the worst humanitarian crisis in the world.

Ahmed Eleiba, an Egyptian researcher in regional security studies at the Al-Ahram Center for Political and Strategic Studies, said that Sisi wanted to reaffirm that his country’s policy toward Yemen does not change and that Yemen’s stability is linked to Egyptian and Gulf national security.

Eleiba added to Al-Monitor that Egypt is in favor of dialogue and any real effort to settle the Yemeni crisis.

However, Eleiba said that the efforts to settle the crisis may collide with variables, most notably the extent of the Houthis’ and Iran’s response and their real desire to transform the truce into a political process that leads to an eventual peaceful settlement.

Sisi said that he agreed with Alimi to cooperate and intensify joint action to protect navigation in the Red Sea, the Bab el-Mandeb Strait and the Arabian Gulf, as this vital issue is linked to regional and international security and stability.

Yemen has been mired in conflict since 2014 when the Iran-backed Houthis seized the capital and ousted the UN-recognized government. This prompted a Saudi-led military coalition to intervene in support for the Yemeni government the following year.

Since then, Egypt, which has strong relations with Saudi Arabia, has taken part in the coalition’s operations in Yemen through its air and naval forces, in addition to stationing warships at the Bab el-Mandeb Strait and in the Red Sea to ensure the ships’ safe arrival to the Egyptian Suez Canal.

There are fears that the turmoil in Yemen will cause the Bab el-Mandeb Strait to shut down, which will prevent oil tankers coming from the Gulf and the Sumed pipeline — which carries oil from the Red Sea to the Mediterranean Sea — from getting to the Suez Canal. Tankers will therefore have to sail around the Cape of Good Hope so as to reach European and American markets, which will increase transit time and shipping costs.

For his part, Alimi said that Egypt stands with his country to restore the state and bring down the Houthi coup. During his press conference with Sisi, he accused the Houthi militia of seeking to take Yemen years back.

Alimi said that he briefed Sisi on the risks to international maritime security and safety with the increased Houthi hostilities across the Red Sea and the Bab el-Mandeb Strait.

Thomas Juneau, associate professor at the University of Ottawa’s Graduate School of Public and International Affairs, told Al-Monitor that the Houthis, in large part thanks to support from Iran, have been increasingly projecting power in the Red Sea.

Juneau, who focuses on Yemen and Iran said, "They have, for example, acquired or developed drone boats, naval mines and shore-to-sea missiles, which can threaten navigation in the Red Sea. This is a growing concern for the United States and for Red Sea littoral states, including Egypt."

The Saudi-led coalition said in January that the Houthi militia used more than 100 booby-trapped boats to target international shipping in the Red Sea. Previously, the Houthis also targeted and seized a cargo ship carrying the UAE flag off the Yemeni port of Hodeidah.

Iran used Yemen as a launching pad for its attacks on Saudi Arabia, providing the Houthis with ballistic missiles and drones to target oil facilities in the south of Saudi Arabia. It also targeted the United Arab Emirates, which is also a key partner in the Saudi-led coalition. Early this year, Houthis launched a number of drone attacks on UAE facilities, claiming civilian lives.

Egypt has close relations with the UAE, which also has vital interests in Yemen, especially those linked to the strategic shipping routes in the south of the country.

Although five rounds of security talks were held between Saudi Arabia and Iran under Iraqi and Omani mediations, differences between the two regional rivals have not been settled diplomatically.

In April, the US Navy formed a multinational task force that would target arms smuggling in the waters around Yemen in response to Houthi attacks on Saudi Arabia and the UAE.

He added that through cooperation with Saudi Arabia and the UAE, Egypt is able to secure international shipping lines in case the Houthis, driven by Iran, decide to go to war. “By agreeing to the truce, the Houthis are buying time to reorganize their military situation on the ground. They have linked their fate to Iran. That is why I rule out the possibility that they go to peace, especially if the nuclear agreement between Iran and the international community fails,” he said.

Sisi and Alimi also discussed the danger linked to the FSO Safer tank and stressed the need for concerted international efforts to solve this crisis as soon as possible in anticipation of a disaster.

The rusting tanker is currently anchored near the port of Hodeidah, which is under Houthi control. Its structural integrity has deteriorated significantly since maintenance works were suspended in 2015. Since then, UN experts have sought to inspect the tanker and unload its cargo, but they have encountered obstacles due to Houthi procrastination.

The Safer tanker holds an estimated 1.14 million barrels of crude oil. An oil spill would severely damage the ecosystems in the Red Sea and cause the port of Hodeidah to close for months.

Alimi’s foreign tour included Kuwait, Bahrain, Egypt and Qatar. This came at a time when Jordan hosted the second round of UN-sponsored consultations between a government delegation and the Houthis, with the aim of reaching an agreement to lift the siege on Taiz and open corridors and roads in other Yemeni governorates that are still under Houthi control.

Juneau said that there are grounds for very cautious optimism in Yemen in light of recent developments, notably the marginalization of former President Hadi and the formation of the new Presidential Council as well as the agreement on a truce.

However, he noted that the country's problems are extraordinarily deep and complex, and countless obstacles remain before peace can be sustainably established. "I do think that Saudi Arabia is serious about wanting to find some kind of solution that will allow it to reduce its commitment in Yemen," he concluded.