Saudi Energy Minister Khalid Falih announced that his country resumed oil exports via the Bab el-Mandeb Strait, amid Egyptian fears that a decrease in traffic in the popular shipping corridor could impact Suez Canal revenues. 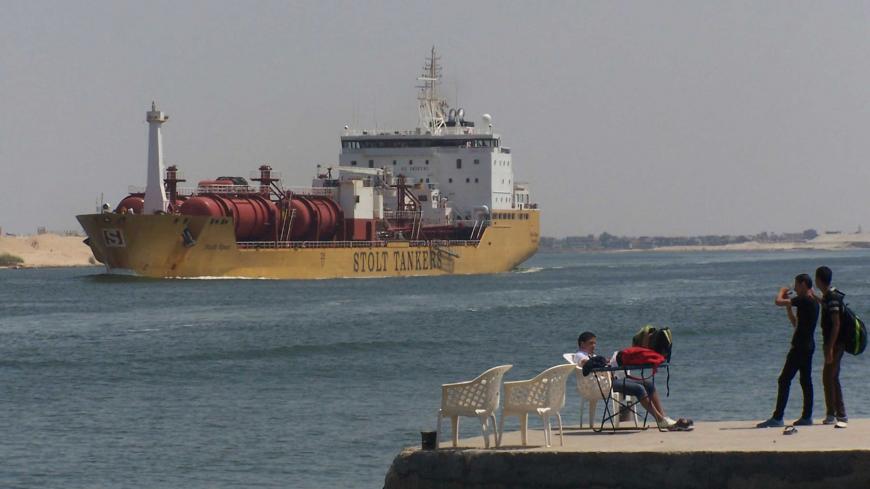 People are seen near a ship crossing the Suez Canal near Ismailia, Egypt, June 13, 2013. - REUTERS/Stringer

CAIRO — Saudi Minister of Energy Khalid Falih said Aug. 4 that his country had resumed oil exports via Bab el-Mandeb Strait, which connects the Red Sea and the Gulf of Aden. Oil exports were temporarily halted on July 26 after an attack on two Saudi oil tankers in the Red Sea by Yemen’s Houthi militias.

The decision to resume oil shipments through the busy trade route came hours after the end of the joint maritime exercises, dubbed Eagle Salute 18, in the Red Sea between the United States, Egypt, Saudi Arabia and the United Arab Emirates, which took place July 26 through Aug. 4.

A well-informed source in the Suez Canal Authority told Al-Monitor on condition of anonymity that on the sidelines of the naval military exercises, the Egyptian military authorities discussed with their Saudi counterparts the need to resume oil shipments through the strait.

The source added that the halt of Saudi oil exports through the lane would have caused a major crisis of navigation in the Suez Canal, particularly since Egypt hopes trade through the canal will set the wheel of the Egyptian economy in motion in the coming years. Egypt’s economic plan is focused on turning the Suez Canal region into an economic hub and an attraction for investments, including industrial and logistical zones.

Commenting on the Saudi decision, the chairman of the Suez Canal Authority, Mohab Mamish, said in a press statement July 27 that the Egyptian leadership recommended the authority to study the dimensions of the Houthi attack on Saudi tankers in Bab el-Mandeb at the political, financial and military levels. He noted that the authority is currently looking into the implications of the attack.

Mamish further stressed that the countries concerned with security in the Red Sea will take the necessary security measures to prevent the recurrence of such incidents. “Houthis are improving their [military] performance, and we will do the same to defend our vital goals,” Mamish said.

Mukhtar al-Sharif, a professor of international economics at Al-Azhar University, told Al-Monitor, “Egypt did well in persuading Saudi Arabia to resume oil shipments through Bab el-Mandeb.” He explained that the oil tankers' route — from the eastern Saudi ports to the Strait of Hormuz, then the Arabian Sea and Bab el-Mandeb, all the way to the Red Sea and the Suez Canal — is of paramount importance for the Egyptian economy. Any halt in the trade of any state through the lane would undoubtedly cause a great loss to the Suez Canal, according to Sharif.

Sharif also warned of repeated Houthi strikes against Saudi oil tankers, noting that the Suez Canal contributes to about 2.2% of Egypt’s gross domestic product, according to 2017 official statistics. The canal is also seen as one of the main five sources of hard currency. Egypt suffered a decline in foreign currency reserves in 2015 and 2016.

Ali al-Bassiouni, a professor of maritime transport and the former president of Suez Canal University, told Al-Monitor, “The repercussions and damage of the attack and the resulting Saudi decision regarding Bab el-Mandeb were minor and did not greatly affect the Egyptian economy.” He explained that the majority of the Saudi oil exports move from the Saudi western coasts along the Red Sea and straight to the Suez Canal.

Bassiouni, however, noted that the unrest in Bab el-Mandeb will affect the oil exports from the ports on the eastern Saudi coast, which go through Hormuz to the Arabian Sea, Bab el-Mandeb, the Red Sea and the Suez Canal.

Bassiouni added that it is possible to export Saudi oil by land from the east to the west of Saudi Arabia. Exports would then be shipped along the Red Sea route all the way to the Suez Canal, without going through Bab el-Mandeb at all. “This is why the [attack] had a minor impact,” Bassiouni said.

Ahmad Shami, logistics expert and consultant to several shipping companies, concurred with Bassiouni. He told Al-Monitor that Saudi Arabia had proactively anticipated any risks to its oil trade in Bab el-Mandeb. The kingdom has a huge pipeline to transport oil, stretching from the country’s eastern to the western parts and vice versa.

Shami noted that in the event of repeated Houthi attacks on Saudi oil tankers, which would prompt Saudi Arabia to halt its exports through Bab el-Mandeb, the Suez Canal revenues would not be greatly affected.

Khaled al-Shafei, a financial and economic adviser to several investment institutions, told Al-Monitor, “The halt of Saudi oil exports via Bab el-Mandeb led to a noticeable rise in oil prices. The average price of the oil barrel may rise from $67 to $75, i.e., a 12% increase, if Saudi re-decides to suspend its shipments.”

This would deepen the budget deficit because, according to the state budget for 2018, the average price of a barrel of oil stands at $67.

Shafei expected the resumption of Saudi oil exports through Bab el-Mandeb to contribute to the reduction of the price of a barrel of oil, noting that any possible suspension of Saudi oil exports in this lane might cause higher oil prices. “This is why Egypt has to take decisive measures to secure traffic and navigation in the maritime lane,” he said.

International lawyer Saad Hussein told Al-Monitor, “The Houthi attack on Saudi or any other oil tankers in Bab el-Mandeb is a dangerous message to all stakeholders and states wishing to take the same route to the Suez Canal. This would impact the canal’s revenues directly, as many countries might have concerns to navigate through the Bab el-Mandeb Strait.”

It appears that Saudi Arabia resumed its oil exports via Bab el-Mandeb at the prodding of Egypt, which feared that any halt in Saudi oil shipments would cause a rise in world oil prices. This would, in turn, deepen Egypt’s budget deficit. The Egyptian authorities are likely to take major security steps — especially after the joint maritime exercises — in the coming days to secure the strait, which is seen as the lifeblood of the Suez Canal.