Israel is currently discussing a project to reopen the old Hejaz railway to connect it with Saudi Arabia, though many Egyptians are concerned about its impact on trade through the Suez Canal. 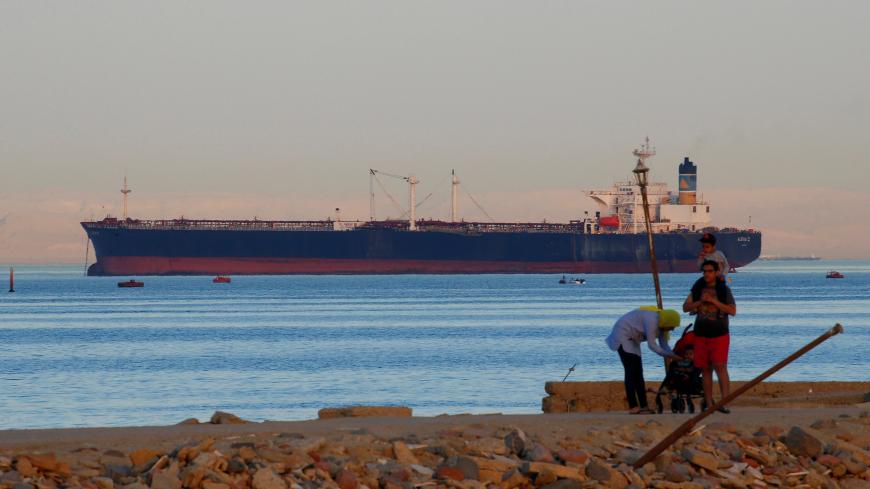 People walk on the beach as a container ship crosses the Gulf of Suez toward the Red Sea before entering the Suez Canal, El Ain El Sokhna, Egypt, April 24, 2017. - REUTERS/Amr Abdallah Dalsh

CAIRO — The last year seems to have been a successful one for the Suez Canal. In a statement to Youm al-Sabeh newspaper on Dec. 31, Mohab Mamish, the chairman of the Suez Canal Authority and the head of the Suez Canal Economic Zone, said the canal revenues increased by 89.9% in 2017 compared to 2016. He expects them to grow further with the opening of the logistics zone and surrounding investment zones.

However, Mamish’s optimism is not enough to lift the doubts tormenting many Egyptians about the long-term feasibility of the Suez Canal Area Development Project launched by President Abdel Fattah al-Sisi in 2014.

On Dec. 13, Israeli Minister of Intelligence and Transportation Yisrael Katz announced Israel's intention to revive a competitor to the Suez Canal, the Hejaz railway project linking the Israeli port of Haifa to the Gulf states.

The Hejaz railway was built in 1908 to link Damascus to Medina through the Hejaz region of Saudi Arabia. It was supposed to extend to Mecca to facilitate pilgrimage to the holy city. A branch was added to the railway to Haifa on the Mediterranean Sea. But when World War I broke out, the railway and its branches were partially destroyed and the rest closed.

In his interview with Elaph on Dec. 13, 2017, Katz explained the project to run a railway parallel to the Red Sea coast and the Suez Canal. “We will extend the track that connects Haifa and Beit Shean to the King Hussein Bridge; the Jordanians will extend it to connect to the Saudi railways,” he said.

Katz pointed out that the project’s studies have been completed and its designs and plans are ready to execute within a year or two if approved by both Jordan and the Gulf states. He confirmed that these countries received the project's proposal, but did not explain how it was presented to them. It should be noted that while the Israel-Jordan peace treaty governs Israel’s diplomatic ties to Jordan, Saudi Arabia has no diplomatic relations with Israel.

In the interview, Katz explained that the railway will cut freight expenses from Europe to the Gulf countries and indicated that 25% of Turkey’s exports to the Gulf travel through Haifa’s port and pass through Jordan.

On his Dec. 18 TV show “Al-Tabaa al-Oula” (Arabic for "First Edition") on Dream TV, former presidential media adviser Ahmed al-Meslemani warned, “This railway will be an alternative to the Suez Canal. It will affect its future revenues, especially as it will be safer than the canal in the case that the Yemen conflict escalates and the Houthis and the Iranian navy try to control Bab al-Mandab Strait.”

“This is not as simple as Katz or Meslemani are saying,” retired Maj. Gen. Mamdouh Attieh told Al-Monitor. “The control by Iran or the Houthis of Bab al-Mandab Strait is not only a hostile act toward Egypt and the Suez Canal, it is an international hostile act and will affect trade between the East and West. Any attempt by Iran or the Houthis to control Bab al-Mandab Strait will face a fierce and violent international response.”

Mustafa Al-Rasheed, a professor of economics at the Arab Academy for Science, Technology and Maritime Transport, disagreed with Meslemani. He told Al-Monitor, “The Israeli project is not a competitor to the Suez Canal, to begin with, and cannot affect its revenues.”

He explained, “As a result of the development mega project launched by President Sisi in 2014 to expand the Suez Canal, the main waterway was deepened to fit massive vessels and large oil tankers. No railway can compete with the new canal. Trains can only carry the same cargo as small-sized ships. This does not mean that the railway project is a failure. It just means that the railway and the Suez Canal have different targeted customers.”

Speaking at the Calcalist 2018 Forecast Conference that brought together major investors and businessmen on Dec. 25 in Tel Aviv, Katz described the Hejaz railway as a historical project.

“I am pushing this forward. I met several times with US officials and bodies to discuss this project. We only need 200 kilometers [124 miles] of track to connect the first train in Saudi Arabia to its last terminal in Israel via Jordan,” he said, adding that the step would represent the arrival of Riyadh's “economic force” in Israel.

Though the railway’s direct impact on the revenues of the Suez Canal may be questionable, a land-link project between Israel and Saudi Arabia raises questions about the effect of normalization between the Saudi kingdom and Israel on Egypt’s economy.

Many experts and observers, including former Egyptian prime minister and possible presidential candidate for the 2018 elections Ahmed Shafiq and prominent Egyptian journalist Abdullah al-Sanawi, have warned of a potential agreement between Israel and Saudi Arabia to establish an Israeli-Saudi alternative to the Suez Canal, with an alternative canal running from the port of Eilat in Israel to the coast of Israel on the Mediterranean Sea. Vessels taking this canal would pass through the Strait of Tiran, which Egypt handed over to Saudi Arabia under the maritime border demarcation agreement known as the Tiran and Sanafir agreement.

Kamal Amer, the head of the Egyptian parliament's National Defense and Security Committee, told Al-Monitor, “Under the Camp David agreement, the Strait of Tiran is an international waterway open to all nations. Egypt cannot prevent navigation in this strait should Israel decide to dig a canal from Eilat to the Mediterranean Sea to compete with the Suez Canal.”

He went on, “Israel has been unable to implement such a canal project since its bedrock is very hard and it is not easy to dig a shipping corridor like the Suez Canal. This has nothing to do with Egypt being able to impede navigation of ships wishing to pass through the Israeli canal.”

So far, no alternatives to the Suez Canal seem likely to affect the canal's revenues anytime soon. Yet normalization between Israel and the Gulf states, especially Saudi Arabia, could at some point break the virtual monopoly the Suez has over trade between the East and the West.