The potential economic agreements between the United Arab Emirates and Israel may reduce traffic through Egypt’s Suez Canal. 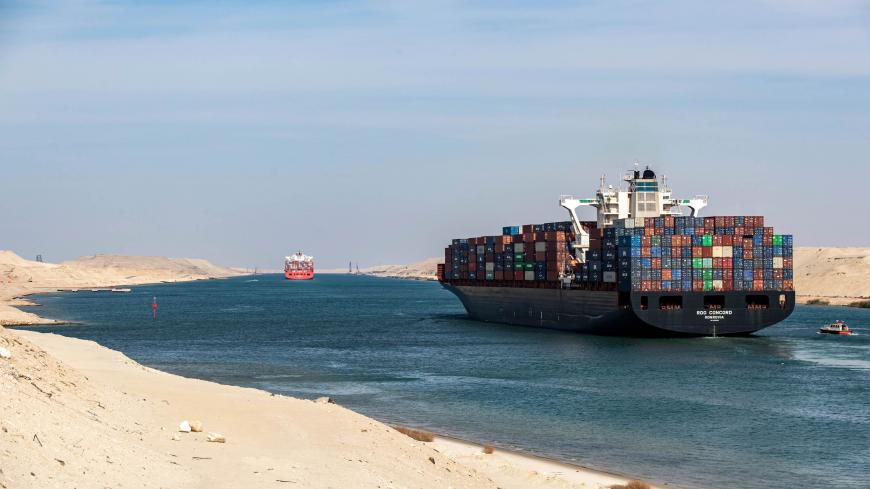 This picture shows the Liberia-flagged container ship RDO Concord sailing through the Suez Canal in the canal's central hub city of Ismailia on the 150th anniversary of the canal's inauguration, Egypt, Nov. 17, 2019. - KHALED DESOUKI/AFP via Getty Images

The United Arab Emirates (UAE) and Bahrain signed Sept. 15 an agreement to normalize relations with Israel at the White House, under the auspices of US President Donald Trump, who hailed it as “the dawn of a new Middle East.”

During the signing ceremony, UAE Foreign Minister Sheikh Abdullah bin Zayed Al Nahyan said that the fruits of this deal will be reflected in the entire region.

One of the immediate outputs of the normalization accord is an agreement signed between the Dubai state-owned DP World and Israel’s DoverTower to develop Israeli ports and free zones, and to open a direct shipping line between the Red Sea port of Eilat and Dubai’s Jebel Ali Port.

DoverTower is owned by Israeli businessman Shlomi Fogel, who is also a partner in the Eilat port.

During a Sept. 16 joint press conference with Fogel, DP World Chairman and CEO Sultan Ahmed Bin Sulayem said that the partnership aims to build commercial lines between the two Middle East countries and other countries, to facilitate and optimize business in the region.

Fogel said that this new cooperation will affect the movement of trade and the global economy, stressing that the two companies will cooperate to establish a joint venture for the port of Haifa.

This step seems to represent a major challenge for Egypt’s Suez Canal, through which some 10% of the global trade volume passes. Egypt plans to increase this capacity to 12% by 2023. This appears to be challenging now with a new competition in the navigation passage connecting the Red Sea and the Mediterranean Sea.

With regard to expected negative effects of the economic partnership between the UAE and Israel, Wael Kaddoura, a maritime transport expert and former member of the Board of Directors of the Suez Canal Authority (SCA), told Al-Monitor, “Most of the exports of the Gulf countries are petroleum products. A shipping line connecting the port of Eilat in the Red Sea and the port of Ashkelon in the Mediterranean would create competition [for Egypt] in the transportation of oil from the Gulf to Europe without the need to pass through the Suez Canal, which is seen as the first challenge. Noteworthy, 17% of the canal’s revenues come from oil tankers.”

Kaddoura said that the railway linking the Eilat port on the Red Sea and the port of Ashdod on the Mediterranean is seen as an inland hub port. He explained that according to the normalization agreement, this railway would be extended to the east to the Arab Gulf states via Jordan, with the aim of transporting goods coming from Europe and the United States via Israel without the need to pass through the Suez Canal. This would be the second challenge to the canal, he added.

The third challenge, according to Kaddoura, is that Israel has become a strong competitor to Egypt in the export of natural gas in the region. Before exporting gas, however, Israel resorts to Egypt for its liquefaction plants. With the normalization deal with the UAE and the ensuing agreements, liquefaction plants will be built in Israel to export gas to Europe, he noted.

Kaddoura also stressed the conflict of interest between Jebel Ali Port and Egypt’s Ain Sokhna Port, both of which are under the management of Dubai’s DP World company. Yet the Egyptian Ain Sokhna Port did not achieve its desired goal to provide logistics and industrial services linked to the global maritime movement, he said.

The Suez Canal, which is 193 kilometers (120 miles) long, is one of the main sources of foreign currency for Egypt. It is the shortest and fastest waterway given its geographical location for travel and goods transport between Asia and Europe.

SCA spokesman George Safwat told Al-Monitor, “The SCA is studying the impact of [the normalization agreement] on the navigation movement in the canal. Nothing is clear yet because the potential projects have yet to materialize on the ground. The SCA will issue a statement as soon as it has a clearer vision of the situation.”

He said, “The SCA has solutions that make it a strong competitor, namely in terms of marketing and pricing plans.”

“During the coronavirus crisis, the canal saw an increase in the number of ships and vessels passing through it, and an increase in the volume of goods. This was due to the marketing campaigns that are designed for each specific period of time and were presented directly to the shipping agencies,” Safwat said.

“International companies prefer transporting their goods through shipping agencies owning ships with less carbon dioxide emissions, which is in the interest of the Suez Canal. This includes IKEA International that prefers passing through the Suez Canal instead of the Cape of Good Hope. This has kept the canal so far at the forefront of the navigation business, and would place it in a strong competitive position,” he added.

Yaman al-Hamaki, professor of economics at Ain Shams University, told Al-Monitor that the economic partnership agreement between the UAE and Israel will adversely affect the navigation movement in the Suez Canal and the circulation of goods at Ain Sokhna Port. “This is a plausible scenario unless Egypt tries to discuss its port position with DP World in light of a new port under its management in a different country,” she said.

“Egypt should play the common economic interests and mutual benefits cards in approaching the UAE lest the Suez Canal and Ain Sokhna Port lose their ability to compete, especially since the UAE is among the top five importing countries of Egyptian goods,” Hamaki explained.

She concluded, “Israel always seeks to maximize its gains at the expense of others. This is why it is imperative for Egypt to start consolidating its economic ties with the UAE and other countries.”