Iran has announced a sea corridor for commercial exchange with Russia and India as an alternative to the Egyptian Suez Canal, which raises questions about the impact this corridor will have on one of the main national economic resources in Cairo that has been severely affected by the coronavirus pandemic. 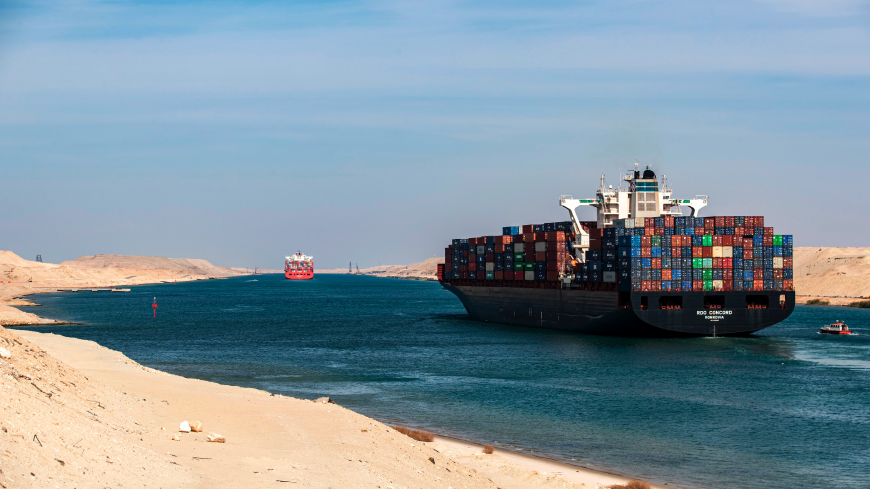 CAIRO — The Iranian Chabahar Free Trade Zone Organization announced July 5 that trade connections to Mumbai, Hamburg and St. Petersburg will be made through Astrakhan (in Russia), Anzali and Chabahar (in Iran) and Nhava Sheva (in India) instead of the Suez Canal. This raises questions about the impact the move will have on the revenues generated by the Egyptian canal, a key source in an economy that has been deeply suffering from the coronavirus pandemic.

The 193-kilometer (120-mile) Suez Canal is a major source of foreign currency for Egypt and one of the pillars of the national economy. It is considered the fastest maritime shipping corridor in the world due to its geographical location and ability to cut travel time between Asia and Europe by an average of 15 days.

The canal revenues declined in May by about 9.6% year-over-year due to the coronavirus repercussions on global trade.

Suez Canal Authority (SCA) chairman Osama Rabie said in media statements July 4 that canal revenues amounted to $5.72 billion in the fiscal year 2019-2020 compared to $5.75 billion last year, marking a decrease of $32.1 billion due to coronavirus implications, which reduced global trade by 18%. Rabie said that new marketing policies adopted by the SCA to attract and organize navigation traffic played a positive role in the generated revenues.

SCA spokesman George Safwat told Al-Monitor over the phone that the idea of the Iranian international transport corridor dates back to 2000 when Iran, Russia and India signed a joint agreement to start establishing a transport route that includes maritime, land and rail transport lines. The route, he said, aims to transport goods and shipments from India and Iran to countries surrounding the Caspian Sea, and from there to Russia and Germany and vice versa over a distance of 7,500 kilometers (4,660 miles).

The execution of this corridor has been closely followed up on since then, as per Safwat, who said the process has been repeatedly postponed due to its high cost.

The SCA official pointed out that the Iranian international corridor is neither a competitor nor a substitute for the Egyptian Suez Canal, whose capacity exceeds 1 billion tons per year, unlike the Iranian corridor’s limited capacity, because its aim is to serve the trade of landlocked Asian countries and countries overlooking the Caspian Sea and it limits goods.

Safwat added that the effects of the coronavirus outbreak were limited as far as the Suez Canal is concerned, as the canal did not incur huge losses thanks to the price cuts that were adopted to attract customers. He said that SCA revenues decreased by $32 billion year-over-year, a rate of 0.5%, due to low global trade, especially in the second quarter of 2020. He expects an improvement in the coming months as world trade starts to pick up.

However, Mohammed al-Said Idris, an expert on Iranian affairs at Al-Ahram Center for Political and Strategic Studies, voiced a different opinion.

He told Al-Monitor that Iran is looking to serve its own interests in the region in light of the challenges it faces due to sharp differences with the Arab Gulf countries and the United States, and that Iran is entitled to exploit this commercial corridor that serves its interests.

Idris said that there are indirect disputes between Egypt and Iran over Cairo’s support for the Gulf positions against Tehran, but there is no direct hostility with Egypt, as is the case with the Gulf states. He ruled out that the Iranian announcement of the commercial corridor is aimed at drawing hostility with Egypt and dealing a blow to the Suez Canal, as its economic purpose is only to preserve Iranian interests, especially in light of US sanctions.

Salah Abdullah, a former parliament member and deputy secretary-general of the Arab Popular Conference, told Al-Monitor that the Suez Canal has no competitor and is the fastest sea lane in the world due to its distinguished geographical location. Also, he added, Egypt has widely developed the Suez Canal to accommodate giant ships transporting goods of huge tonnage. Consequently, and like any other corridor, the declared Iranian corridor won’t be affecting Suez Canal revenues.

He said that relations between Iran on the one hand and on the other Saudi Arabia and the Gulf states, which control the Red Sea along with Egypt, are strained. Therefore, he continued, Tehran is looking for alternative trade routes in anticipation of any future developments that might come its way.

According to Abdullah, the Iranian announcement of the commercial corridor came as a temporary alternative or as a rescue route and not as an economic alternative, but the Suez Canal remains the fastest, cheapest and safest maritime corridor in the world, and this explains the high turnout it witnesses.

Ahmed Sultan, an international expert in maritime transport, concurred, as he pointed out to Al-Monitor that the Suez Canal location is unique and does not have a competitor or alternative worldwide. He said the announcement of the Iranian corridor as a substitute for the Suez Canal only comes in the framework of media distortion, as it does not reflect the reality on the ground.

Sultan expected Suez Canal revenues to witness a tangible improvement in the last quarter of 2020 with the easing of the lockdowns imposed to stem the coronavirus pandemic, and this will positively affect both the global trade movement and the Suez Canal.