Egyptian officials have been expressing concern over the anticipated competition from the Eilat-Ashkelon pipeline project that would transport Emirati oil to Ashkelon in Israel and from there to European markets. 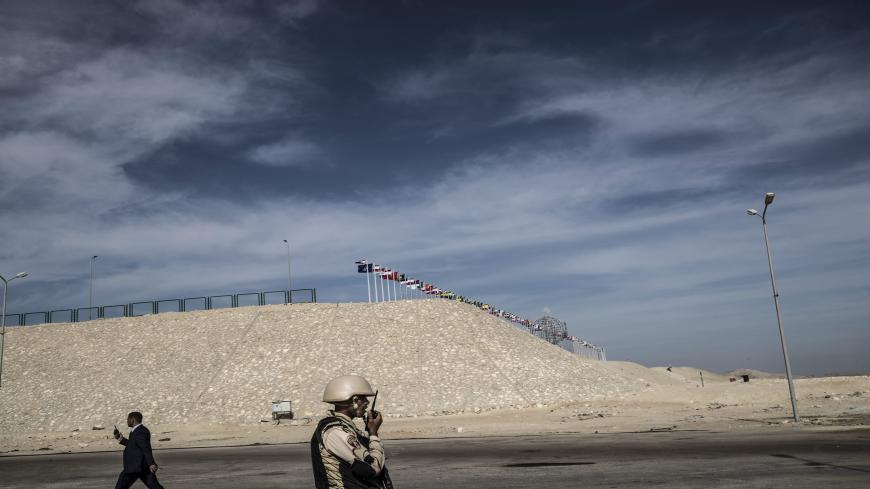 An Egyptian soldier stands guard during an organized tour for diplomats to mark the 150th anniversary of the inauguration of the Suez Canal, in the northeastern city of Ismailia, Egypt, Nov. 17, 2019. - Khaled Desouki/AFP via Getty Images

CAIRO — The head of the Egyptian Suez Canal Authority (SCA), Osama Rabie, expressed Jan. 29 his country’s concern over the Eilat-Ashkelon pipeline project between the United Arab Emirates (UAE) and Israel.

The project will allow Israel to transport Emirati oil to its Ashkelon port and from there to European markets.

In statements to the Egyptian TV channel Sada al-Balad, Rabie said that Egypt is closely following up on the project, given its direct impact on ships passing through the Suez Canal.

On Oct. 20, 2020, the Israeli state-owned Europe Asia Pipeline (EAPC) company and the UAE-based MED-RED Land Bridge signed a memorandum of understanding to use the Eilat-Ashkelon pipeline connecting the Red Sea city of Eilat to Ashkelon in the Mediterranean for transporting Emirati oil to Europe.

The two companies are planning to use a land bridge to transport oil through the deal estimated at $700-$800 million, which would “save time, fuel and costs versus crossing the Suez Canal, to transport oil back and forth between other countries,” the EAPC stated.

The Israeli company said in a statement following the signing ceremony that the deal “is likely to increase the transferred quantities by tens of millions of tons per year.”

EAPC further said that the deal “offers oil producers and refiners the shortest most efficient and cost-effective route to transport oil and oil products from the Arabian Gulf to the consumption centers in the West, and provides access for consumers in the Far East to oil produced in the Mediterranean and Black Sea regions.”

EAPC Chairman Erez Calfon described the agreement as “historic” and noted that this 254-kilometer (158-mile) line could nip off a large share of the oil shipments that now flow through the Suez Canal.

On Sept. 5, 2020, Foreign Policy magazine published a report, saying, “The pipeline’s advantage over the Suez is the ability of the terminals in Ashkelon and Eilat to accommodate the giant supertankers that dominate oil shipping today, but are too big to fit through the canal.”

Egypt highly depends on the Suez Canal income as one of the most important sources of foreign currency. In an attempt to calm the Egyptian public opinion following Rabie’s statements, the SCA issued a statement Feb. 2, saying that the analytical studies drafted by its economic unit found no actual impact from the operation of the Eilat-Ashkelon pipeline on the navigation traffic passing through the canal.

On the same day, Rabie said in a telephone intervention on Sada al-Balad channel, “I would like to tell those who say the [Suez] Canal will no longer beat the competition that there will be no competition, because there is no one but us.”

Basant Fahmy, an economic expert and former member of the parliamentary Economic Affairs Committee, told Al-Monitor that any threat to the Suez Canal is extremely dangerous for Egyptians. “The government relies on the Suez Canal as one of the main sources of foreign currency, followed by tourism [revenues] and remittances sent by Egyptian expatriates.”

According to a statement by the SCA Jan. 3, the total revenue from the Suez Canal in 2020 amounted to $5.61 billion.

Fahmy said, “Unfortunately, the government relies only on three sources to secure hard currency: the Suez Canal, remittances and tourism. After the coronavirus crisis and the subsequent return of a large number of Egyptians [who worked] abroad — not to mention the decline in tourism [revenues] — the Suez Canal has become almost the only source of foreign income. Thus, talk about any alternative way that may affect it will naturally spark fears and concerns [among Egyptians].”

Last year, Cairo welcomed back thousands of Egyptian workers who were laid off from their jobs in several Gulf countries due to the economic repercussions of the coronavirus crisis.

Fahmy said that the continuity of the Suez Canal operation under these circumstances and in light of global competition will weaken its performance over time, reduce its revenues and affect Egypt's geostrategic position.

On Dec. 21, 2020, the SCA announced a 48% discount on the transit fee of giant crude oil tankers with a tonnage of more than 250,000, in an attempt to increase the volume of ships passing through it.

Fahmy urged the government to accelerate the development of the Suez Canal axis, by turning it into a global industrial and logistical hub for supply, transport and trade. “This would help attract investments in various sectors, rather than standing idle and waiting for the disaster to happen.”

He added, “We have ports and industrial zones in the Suez Canal area and the [president] is seeking to exploit them. If the government succeeds in exploiting these capabilities, the Suez Canal will have no competitor.”

Maj. Gen. Hatem Bashat, a military expert and former member of parliament, told Al-Monitor that the Eilat-Ashkelon pipeline project was not a last-minute agreement, but the normalization agreement — signed at the White House on Sept. 15, 2020 — between the UAE and Israel helped accelerate its launching.

On the impact of the pipeline on Egyptian-UAE relations, Bashat said that the Egyptian-Emirati relations are strategic and cannot be affected. “It is only natural that each country seeks to benefit its own interests in a way that serves its people and strengthens its economy.”

Bashat concluded that Egypt has an ambitious and clear strategic plan for development and progress through the Suez Canal, noting that competition is always healthy and natural.