Egypt says no worries over Suez Canal amid Russian-Ukrainian standoff

The head of the Suez Canal Authority said Egypt is ready for all the possible scenarios resulting from tensions between Russia and Ukraine and their impact on global navigation. 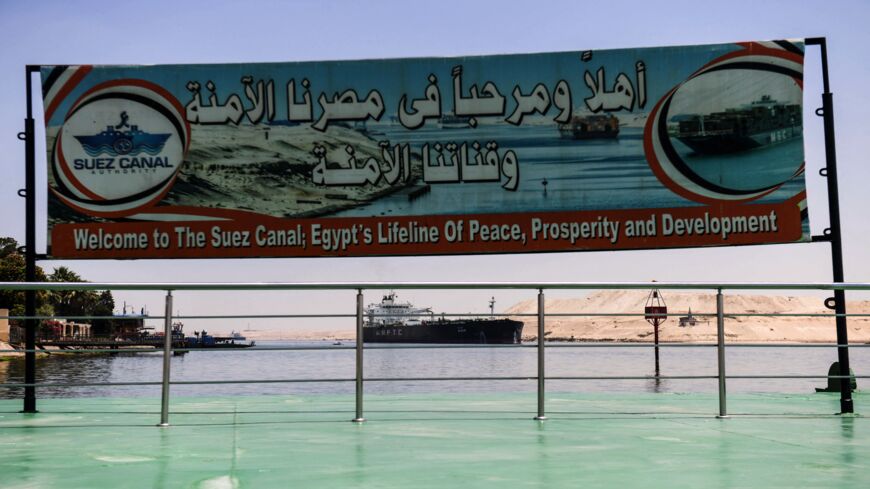 A welcome sign on the Suez Canal shore in the northeastern Egyptian city of Ismailiya, on May 27, 2021. - AHMAD HASSAN/AFP via Getty Images

CAIRO — The head of the Suez Canal Authority (SCA), Lt. Gen. Osama Rabie, recently said that the authority is ready for all possible scenarios resulting from the ongoing tensions between Russia and Ukraine and their impact on global navigation.

In an interview with Ahmed Moussa, a journalist close to the Egyptian government, on the Sada al-Balad TV channel on Feb. 15, Rabie added that the SCA is prepared for any developments in case of war breaking out between the two countries. He underlined the SCA’s previous successful experiences in dealing with major crises such as the outbreak of the COVID-19 pandemic and the stranded Ever Given container ship that blocked the Suez Canal last year.

Rabie said that the authority managed to protect SAC revenues, a main pillar of the national economy, from getting affected by any major conflict or event.

Tensions between Ukraine and Russia have reached their highest levels in years after Russia’s decision Feb. 21 to recognize the two breakaway territories of Luhansk and Donetsk in eastern Ukraine, amid fears of a Russian invasion of Kiev.

The move raised the concerns of the United States and Europe, Ukraine’s main allies, which warned Russia against any aggressive measures and threatened to impose economic sanctions on Moscow in the event it invades Kiev.

Meanwhile, Rabie continued to say in his interview that the SCA has no competitors because it has many advantages, most importantly its ability to overcome major challenges, as was recently evident.

He added that a slight increase of 6% for the transit fees was introduced in February, except for cruise ships that have not yet recovered from the pandemic’s repercussions and some gas-carrying vessels.

Rabie said that the plan to develop the canal is progressing well, with 14% of the dredging work completed in the southern part of the canal as part of a plan to increase traffic.

The Suez Canal achieved the highest annual revenue in its history last year, with revenues topping $6.3 billion in 2021 compared to $5.6 billion in 2020, which is an increase of $720 billion.

The Suez Canal is the fastest sea lane linking Asia and Europe, with a length of 193 kilometers (120 miles). It is one of the most densely used sea lanes and a major artery for global trade.

An SCA official who requested anonymity told Al-Monitor that the authority has a study center currently studying the necessary plans to maintain the revenues and take preemptive measures in relation to the Russian-Ukrainian crisis and its possible repercussions on global navigation.

“The canal proved itself in managing crises and making record revenues, which was the case during the pandemic and during the crisis of the stranded ship. It proved it can tackle problems in unconventional ways, which helped achieve record revenues despite the ongoing repercussions of the coronavirus pandemic,” the source said.

He said that there are “marketing plans to attract more shipping lines, provide incentives and reduce fees to increase the number of ships passing through the canal, preserve the canal’s existing customers, remove any obstacles facing the navigation movement, build on previous experiences and follow up on all technological developments in the field.”

“The project to develop and deepen the canal to accommodate more ships is being implemented in full swing to maintain the high revenues each year,” the source said.

Ahmed al-Shamy, a former adviser to the Ministry of Transport for maritime transport affairs, seems to concur with the SCA official, saying that “the canal was able to successfully handle major crises, which made it gain the confidence and more support from the people and the political leadership that praised its ability to solve problems in an unconventional way and maintain high revenues year after year, which is crucial for the national economy.”

Shamy told Al-Monitor, “I do not believe that the tension between Russia and Ukraine would directly affect the Suez Canal. In the event of war, this would impact the entire world, including the canal, but to a lesser or maybe positive extent since the ships that usually sail the Russian Northern Sea Route would have to divert their course to pass through the Suez Canal, which means more revenues.”

He said that the Suez Canal has witnessed in the past 10 years many conflicts unfolding in the area, including in Libya, Yemen and Syria, not to mention the events of Jan. 25, 2011, and June 30, 2013, in Egypt.

“Yet the canal’s revenues remained unaffected [and] rather [have] increased every year, thanks to the tight security of the army over the navigational channel and the SCA’s managerial competencies and expertise in dealing with problems. Therefore, there are no concerns about the repercussions of the tension between Moscow and Kiev,” Shamy said.

Wael Kaddour, a former member of the Suez Canal Board of Directors, believes that the SCA lacks vision and long-term plans to confront challenges and is merely reacting to crises without having proactive measures in place.

“The canal is in dire need [of developing] the work system by introducing modern technological means in relation to guidance, and developing long-term plans to face challenges in an attempt to preserve high revenues and be prepared for any competition in shipping lanes,” Kaddour told Al-Monitor.

“The ongoing tension between Russia and Ukraine could lead to a rise in energy and oil prices and prompt European countries to look for a source of gas other than from Russia, which is something positive for the Suez Canal as it means more ships passing through it,” he added.

“In the event of a war between Russia and Ukraine, ships passing through the Northern Sea Route would reroute through the canal because it is the fastest and safest passage. This would mean more revenues for the canal. But the war could have an impact on Egypt’s imports of wheat, which come mainly from both countries,” said Kaddour.