The Egyptian government announced that the Suez Canal has achieved the highest monthly revenue in its history in April, exceeding half a billion dollars, despite obstruction of navigation in late March after a giant vessel went aground on the international waterway. 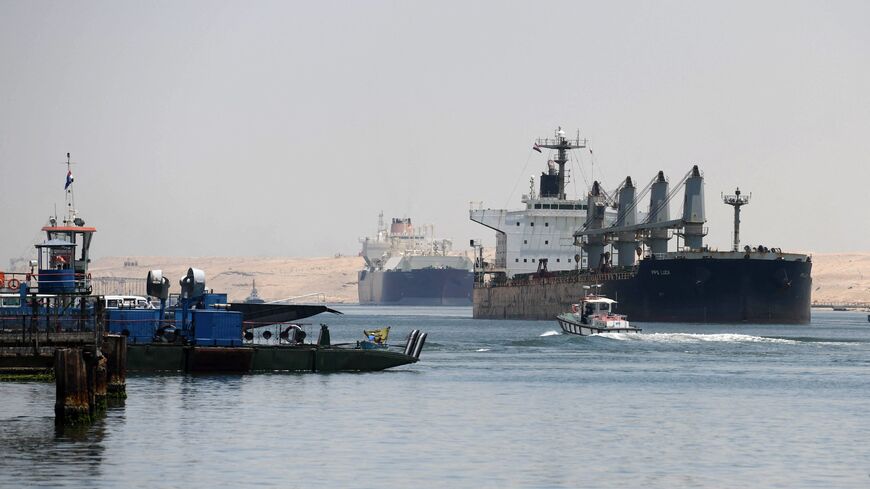 Ships sail through the Suez Canal in the northeastern Egyptian city of Ismailiya, on May 27, 2021. - AHMAD HASSAN/AFP via Getty Images

CAIRO — The Suez Canal recorded the highest monthly revenue in its history in April, more than half a billion dollars, despite the blockage of navigation in late March caused by a giant Panama-flagged vessel.

Navigation in the Suez Canal was blocked at the end of March when the Ever Given cargo ship ran aground on a narrow passageway of the international canal. It took six days for salvage crews to free the ship, after which navigation resumed in the canal.

In a report presented at a Cabinet meeting June 3 on the performance of the Egyptian economy, Minister of Planning and Economic Development Hala al-Saeed said the Suez Canal had made an unprecedented achievement in recording its highest monthly revenue in April — $553.6 million, compared with $476 million in April 2020. This was an increase of 16%, despite the impact of the coronavirus outbreak and the ship blockage crisis in late March. She said this increase was due to the introduction of multiple alternatives to cater to the international shipping institutions, ship owners and operators, with flexible price packages for canal transit fees.

The Suez Canal is a 193-kilometer (120-mile) waterway linking the Mediterranean Sea to the Red Sea. It is the fastest and safest sea passage in the global trade movement between East and West, and one of the main sources of Egyptian national income.

Lt. Gen. Osama Rabie, head of the Suez Canal Authority, said in a press statement May 24 that April canal revenues were not driven down by the crisis of the stranded Ever Given.

Wael Kaddour, a former member of the board of directors of the canal authority, told Al-Monitor over the phone that the ship was stranded and disrupted navigation for six days, causing a traffic jam with more than 400 ships waiting to pass through the waterway. He said that as soon as the ship was floated, the other ships crossed the canal, and the fees they paid helped boost revenues to the unprecedented amount.

Kaddour, however, expressed dissatisfaction with the canal authority's management of negotiations with the Ever Given over compensation; Egypt demanded more than $900 million before the amount was reduced. He said this mismanagement will have future negative repercussions on the canal and must be remedied.

The canal authority has been negotiating with the owner of the Ever Given, demanding it pay financial compensation for expenses and losses incurred by the canal after the ship blocked the waterway. On May 30, the Ismailia Economic Court postponed examination of the case to June 20 to make way for further negotiations amid the dispute over the amount to be paid. The canal authority reduced the requested compensation from $916 million to $550 million; the ship owner has offered to pay $150 million.

Kaddour said the Suez Canal has the right to compensation for the damages it suffered as a result of the ship's grounding, but without exaggeration of the losses.

He expected the annual revenue of the canal for the fiscal year 2020-21, which ends in June, to reach $5.8 billion.

Ahmed el-Shamy, an adviser to the Ministry for Maritime Transport Affairs, said that despite the global economy’s decline of up to 4.4% and the fall in global trade by 10% in 2020 due to the coronavirus pandemic, the Suez Canal is still achieving record numbers and high revenues. This is a very important and positive matter for the national economy, he said.

Shamy told Al-Monitor over the phone that the canal authority's achievement of the historic revenue in April indicates that the Suez Canal is still the safest, fastest and most attractive maritime passage in the world and a major hub for global trade movement. He expected revenue for the current fiscal year to reach $6.2 billion — a little more than what Kaddour expects.

Shamy said the increase in the revenues of the Suez Canal is not a coincidence but rather the result of great efforts from the Egyptian state and the canal authority, which developed a good marketing policy and provided incentives and reductions in ship passage fees. This contributed to an increase in the number of ships going through the canal, which was reflected in an increase in revenues. For example, 1,814 ships transited teh canal in April, up from 1,731 ships during the same month in 2020.

He said improvements are regularly made to the canal, with the latest plan calling for widening and deepening the southern part of the canal where the blockage occurred. He said Egypt has huge locomotives and dredgers in preparation for any future crisis besetting the canal. The ports surrounding the canal are also developed constantly to remain attractive for investment, he added.

Rashad Abdo, director of the Egyptian Center for Economic and Strategic Studies, said he does not believe the Ever Given crisis is having any impact on canal revenues. April's revenue numbers are a positive harbinger for the national economy, he told Al-Monitor.

Abdo added that the global vaccination campaigns against the coronavirus contributed to the replenishment of the global trade movement and the rise in oil prices. As a result, the revenues of the Suez Canal have increased, as have the ships passing through it, he said.

Abdo called for the development of a flexible marketing policy, and a good study of the global market, to maintain the increase in the Suez Canal revenues.