Egyptian President Abdel Fattah al-Sisi has approved a project to widen and deepen the southern stretch of the Suez Canal, where a giant vessel blocked the strategic maritime artery for nearly a week in March. 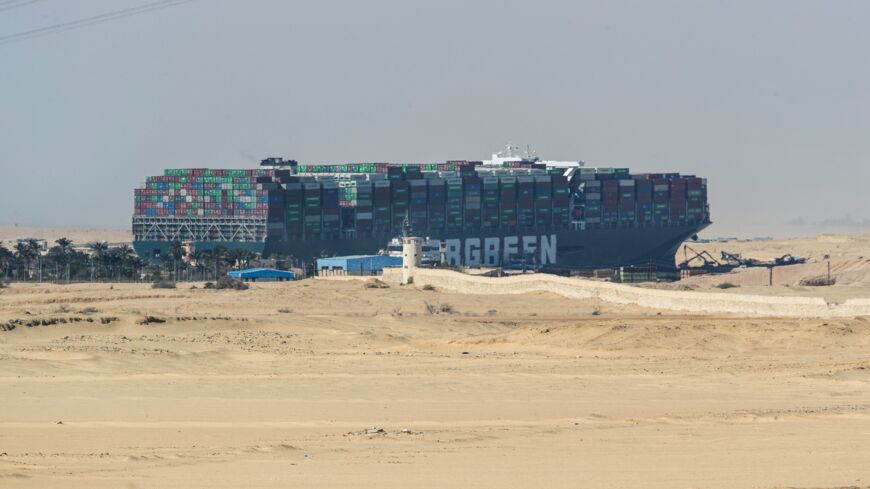 The container ship Ever Given is seen stuck in the Suez Canal on March 28, 2021, at Suez, Egypt. - Mahmoud Khaled/Getty Images

CAIRO — At the May 11 inauguration ceremony of a number of development projects at the Suez Canal Authority headquarters in Ismailia, attended by a number of top government officials, Egyptian President Abdel Fattah al-Sisi announced his approval of a project to expand the Suez Canal.

Canal authority chairman Lt. Gen. Osama Rabie, who presented the project to Sisi, said at the ceremony that the project aims to widen and deepen the southernmost 30-kilometer (18-mile) stretch of the waterway by 40 meters (130 feet) eastward. It also seeks to deepen the waterway from 66 feet to 72 feet and extend the second canal lane opened in 2015 by 10 kilometers (6 miles) southward, Rabie said.

The project will increase the Suez Canal capacity to three ships in each direction, Rabie added, noting that the project will ensure a better passage for ships in the waterway, which is where the 400-meter-long (1,310-foot) Ever Given vessel ran aground and took a week of towing and dredging to finally be freed back in March.

Speaking at the televised ceremony, Sisi said the project aims to improve the movement of ships in the southern stretch where the Ever Given was jammed; he expressed hope that the project would be completed in less than 24 months.

He said he is not willing to mobilize huge resources for the project and called for using available canal authority equipment and resorting to foreign companies that would make good offers for their dredging services.

Sisi said the new project is part of a plan that targets the entire shipping passage, not only the section that was opened in 2015. "The project was planned for a later stage, but it is about time to implement it given the recent developments,” he said in reference to the container ship incident.

Nearly 12% of global trade goes through the 193-kilometer-long (120 mile) Suez Canal that connects the Mediterranean Sea to the Red Sea. The canal has been the shortest maritime route between Asia and Europe since it was opened in 1869. In 2015, the Egyptian government widened the canal, deepened the main waterway and opened a 35-kilometer-long (22 mile) parallel waterway at a cost of nearly $8.2 billion.

An informed source at the canal authority told Al-Monitor that the new project is designed to restore and boost confidence in the canal as a top international shipping lane on the heels of the Ever Given incident. It also seeks to widen and deepen the southernmost stretch to reduce any risks that a ship’s captain could face due to the curves or opposing water currents, and to avoid any accidents in the future, he added.

The source explained that the new project is a continuation of the canal lane that was opened in 2015, which was limited to the northern and central sections of the canal. This time, the focus is made on the southern section, the source added, indicating that no changes have been made to the southern section since the canal was inaugurated and that it involves bends with harder rocks.

The Ever Given accident caused a global crisis and placed the Egyptian government in a critical position. This prompted authorities to implement the project — although Rabie affirmed on March 28 that the project will not economically benefit Egypt.

The source explained that a project was presented in 2002 to widen and open a parallel waterway along the canal given the passage of large submarine tankers and increased traffic since 2000. But the project was rejected more than once for political and security reasons, he said.

It wasn’t until 2014 that Sisi started showing interest in the project, which gave the canal a strategic dimension and the opportunity for two-way traffic and for giant carriers to pass through, the source said.

But the lane that was opened in 2015 did not achieve the desired revenues due to the decrease of global trade and the COVID-19 pandemic. “The project will acquire a strategic importance in the long run, as the government seeks to establish a Suez Canal Economic Zone (and four ports along the canal) and to provide ship services,” the source added.

In a May 13 tweet, MarineTraffic Online Services, which monitors shipping operations around the world, said, “Even without a ship blocking it, the canal is heavily congested daily, as this playback of traffic of the last 24hrs shows.”

Wael Kaddour, a former canal authority vice chairman, told Al-Monitor there are political goals behind the new project, most notably putting an end to calls for an alternative route to the Suez Canal.

Kaddour said the Ever Given incident pushed some countries, such as Russia and Iran, to talk about alternative routes to the canal, prompting the Egyptian government to announce the plan to widen and deepen the waterway.

He said that there were also political motives behind the opening of the canal lane in 2015 and that Sisi wanted to rally all Egyptians around a national goal. The canal appears unlikely to achieve an increase in revenue to $13.2 billion by 2023 as the canal authority had projected, he added. Suez Canal revenues dropped to $5.6 billion in 2020, compared with $5.8 billion in 2019, in light of the COVID-19 pandemic, which gravely impacted global trade.

Kaddour said “the wider the canal, the fewer the incidents. Yet such projects will be [uneconomical for Egypt], similar to the canal lane that was opened in 2015.”