Environmental groups claim that the new project to transport Gulf oil via Eilat to Europe is likely to damage the local unique coral reef. 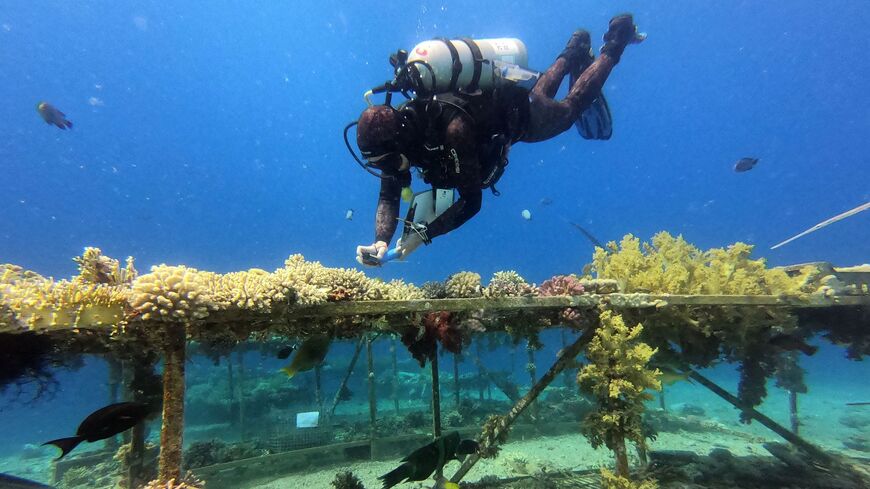 Marine biology doctoral student Guilhem Banc-Prandi inspects corals growing on tables in the Red Sea as a part of research for the Interuniversity Institute for Marine Sciences near the southern Israeli city of Eilat on May 20, 2019. - MENAHEM KAHANA/AFP via Getty Images

The idea of shortening the route that petroleum traverses from the Persian Gulf to Europe makes perfect sense geographically. Instead of circling the Sinai Peninsula and passing through the crowded and expensive Suez Canal, oil tankers could take a much shorter route to the Gulf of Eilat, from where their petroleum and byproducts can be sent to Israel’s southern port on the Mediterranean coast. Containers waiting there would then transport the cargo to Europe.

The idea could not be implemented until last summer for practical and political reasons: Israel and the Gulf States did not have direct diplomatic relations. Since then, a series of peace agreements known as the Abraham Accords were signed between Israel, the United Arab Emirates and Bahrain.

Business and trade between the participating countries has been growing at a rapid pace, including in the field of energy. Israel’s Delek Drilling recently sold its shares in one of Israeli’s gas field in the Mediterranean to an Emirati company, Mubadala Petroleum.

The agreements also provided momentum to the prospect of transporting Gulf oil through Israel. It is actually an old idea, though it gained momentum at the 2019 Manama Conference, which dealt with the economic aspects of then-President Donald Trump’s plan to promote regional peace and economic development.

Before the accords were even formally signed, senior executives in the Eilat-Ashkelon Pipeline Company (EAPC), including chairman Erez Halfon and CEO Itzik Levy, visited the UAE.

The results of these discussions and further contacts began to take shape a month later. On Oct. 20, the EAPC signed a memorandum with Med-Red Land Bridge, Ltd., to transport petroleum from the Persian Gulf to Israel, and from there to supply it to various clients in the Mediterranean Basin. According to the EAPC statement, the maritime line would transport petroleum from the UAE and other Asian producers to Western markets using the Israeli firm’s transportation and storage infrastructure.

The ceremonial signing of the memorandum took place in Abu Dhabi in the presence of American Treasury Secretary Steve Mnuchin, Emirati Minister of State for Economic Affairs Obaid Humaid Al-Tayer, the US president’s emissary to the Middle East Avi Berkowitz and Israeli and Emirati business leaders. Hisham Abd Ahmid, deputy chairman of National Holdings, which is a part-owner of the Emirati petroleum supplier, said that this opportunity would not have been possible without the signing of the Abraham Accords between the United States, Israel and the UAE.

The agreement should earn the EAPC revenues amounting to $700 million over eight years.

But now Israeli environmental organizations have demanded that the signatories disclose exactly what the agreement entailed and whether it poses a threat to the Gulf of Eilat, with its famous coral reefs. Environmental groups like Zalul and the Homeland Guards brought together a coalition of 20 like-minded organizations to demand that its implementation be stopped.

They argue that because of its genetic composition, local coral has a chance at surviving the climate crisis that has already taken a devastating toll on many other types of coral around the world. They say this coral is not only important to the city of Eilat but to the entire world, since it can be used to reproduce coral globally. A single mishap could destroy the coral, since it is highly susceptible to contamination. With more oil tankers in the Gulf of Eilat, the likelier it becomes that there will be an accident in which oil gets spilled. The coalition argues that the EAPC infrastructure is outdated, and that a serious leak from the tankers or pipeline is only a matter of time. They also argue that the agreement allows for the arrival of megatankers to the port, which will first have to be deepened, a process that will also have a deleterious impact on the coral reefs.

The groups recruited 250 scientists from Israel and around the world to sign a petition earlier this year, warning of an environmental catastrophe if the agreement is implemented. The petition reads, “This agreement exposes the entire Gulf of Eilat-Aqaba, the Sinai Coast and their coral reefs to enormous risk due to leaks, mishaps, or sabotage. In this region, it is only a matter of time. The same is true of the Mediterranean coast and the pipeline routes if just 1% of the oil spills into the sea. This would amount to thousands of barrels of oil in a tiny gulf. The oil would cover the beaches and coral reefs of Eilat, Aqaba, and the Sinai coast. Due to their biological richness and diversity, coral reefs are considered to the world’s underwater 'rain forests.' Eilat’s coral reefs almost went extinct in the 1970s because of intense activity by the EAPC’s tanker terminal at the time. It has taken 40 years of hard work to revive and rehabilitate them.”

But the environmentalists’ struggle was unable to block the agreement. Over the last few months, tankers have started arriving in the Gulf of Eilat as planned. Their petroleum is then sent by pipeline to Ashkelon, where it is reloaded onto other tankers, which transport it to European markets. The environmental groups have shifted gears and earlier this month petitioned the Supreme Court to overturn the agreement.

The petitioners wrote that the agreement must receive government approval, and that this can only happen after the government has debated whether the pipeline is in the public interest and investigated the environmental risks it poses. Such an investigation has not yet taken place, despite the enormous risks involved in pollution from oil and petroleum byproducts. The environmentalists claim Israeli law requires government-owned companies that sign agreements of this sort to first obtain government approval, among other things.

The EAPC responded, “The agreement, which is already being implemented, boosts Israel’s economy and international standing, and ensures Israel’s energy independence and security, while engaging in careful and ongoing protection of the environment. The EAPC has the most advanced equipment in the field. It meets international standards, and conducts emergency drills and assessments on a regular basis.”

The statement did not mention that a leak in the company’s pipeline resulted in 5,000 cubic meters of raw petroleum contaminating a nature reserve near Eilat, causing irreversible damage.

The EAPC and the state are expected to submit their responses to the Supreme Court sometime in June.