New Environmental Protection Minister Tamar Zandberg has announced some lofty goals, including raising the target for renewable energy to 40% by 2030. 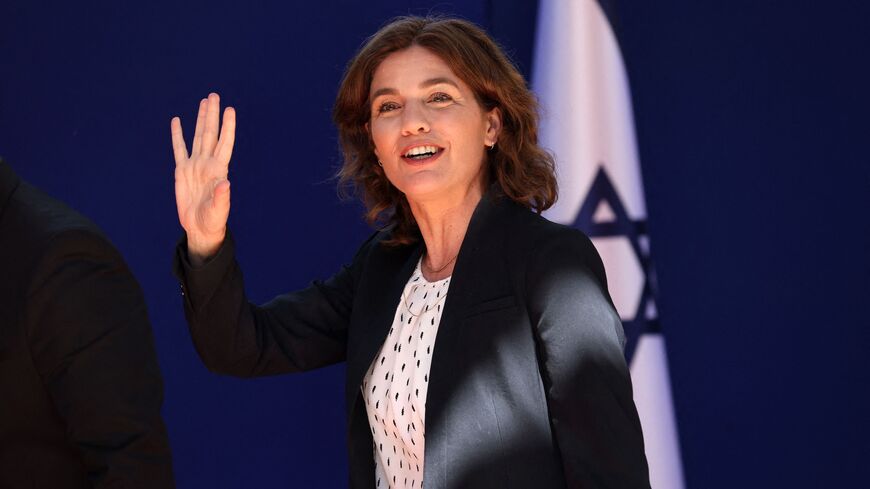 Incoming Israeli Environmental Protection Minister Tamar Zandberg arrives for a photo at the president's residence during a ceremony for the new coalition government in Jerusalem, on June 14, 2021. - EMMANUEL DUNAND/AFP via Getty Images

Israel's new minister of environmental protection, Tamar Zandberg of Meretz, has a very clear agenda. She had said that once she entered office, she would wage fierce fights over environmental issues, including some that could cause friction within the ideologically diverse new government or even with neighboring states.

She genuinely wanted this position and fought to get it. In a June 15 speech upon entering the ministry, she said that the new government must put environmental protection at the top of its agenda and at the center of of its activities. She wants to see Israel take environmental protection measures up a notch in recognition of the urgency of the climate crisis.

Zandberg wants the country to act quickly to develop the tools needed to handle the crisis. She made reference to what she called, “the US administration’s dramatic return to the Paris Climate Accords, which effected a shift in mood toward recognition of the real threat [climate change] poses to our lives. This is especially true in the Middle East, since this region is particularly vulnerable to climate change. Israel may be a tiny country, but its geographical location and the state of its economic development obligate us to make a big leap up to the next level, comparable to what the most advanced nations in the world are doing, even while we integrate into the region.”

Zandberg told Al-Monitor that she will take steps to implement the new government’s commitment, as laid out in its guidelines, to pass far-reaching climate legislation, including carbon pricing. She wants to see a tax on carbon imposed on factories, transportation and other carbon producers. She explained, “Worldwide, this has proven itself as the most effective means of reducing [carbon output]. In practice, Israel is one of the last countries in the OECD that has yet to introduce a carbon tax.”

Another issue that is especially controversial in Israel is the use of natural gas extracted from the gas fields discovered in the Middle East in the last decade. Zandberg says that we cannot continue to develop infrastructure for oil and gas as they will lock us into using energy sources whose time has passed or will pass in just a few years. She was referring to efforts to convert electrical power stations from coal to gas as well as the construction of new power plants based on gas. Zandberg wants to raise the target for renewable energy to at least 40% by 2030 and to eliminate polluting emissions entirely by 2050. In contrast, last year former Energy Minister Yuval Steinitz announced a target of 30% renewable energy by 2030.

In order to reach even Steinitz' more modest target, the Israeli energy market would need solar energy systems capable of producing 15,773 megawatts. At present, solar energy production in Israel amounts to just 2,248 MW. According to the ministry's plan, the system’s energy storage capacity would have to grow tenfold, from 300 MW today to 3,000 MW by 2030. Furthermore, solar energy facilities require huge amounts of space. The Energy Authority estimated it would require 140,000 dunams of land.

Steinitz had estimated that his plan would cost about 80 billion shekels ($24 billion). Extrapolating from it, Zandberg’s plan would cost 105 billion shekels [$32 billion]. However, Israel already has an enormous budget deficit, making such large investments problematic for the economy. Zandberg will face a stiff battle against the Finance Ministry.

A third, equally controversial issue involves the United Arab Emirates. The Eilat-Ashkelon Pipeline company signed an agreement with the UAE to provide a pipeline to carry oil — and later gas — from the Emirates, brought by container ship to the Gulf of Eilat to the port of Ashdod on the Mediterranean coast, thereby eliminating the need to use the Suez Canal.

Zandberg says that the Gulf of Eilat faces a serious environmental threat because of the Eilat-Ashkelon Pipeline project and that Israel should not serve as a bridge for carrying oil to other countries. She also claims that the decision to construct the pipeline was made behind the back of the Ministry of Environmental Protection and the government as a whole, and that it poses dangers to safety and security, putting tourism, the local economy and the health of local residents at risk. She has announced that she plans to submit a proposal to the government to repeal the Eilat-Ashkelon Pipeline agreement and ensure that Israel has oversight over the already existing the pipeline.

After the signing of the Abraham Accords between Israel and the UAE, the pipeline company signed a memorandum with Med-Red Land Bridge, Ltd. to carry oil from the Persian Gulf to Israel, from where it will be provided to various clients in the Mediterranean basin. The signing of this agreement took place in Abu Dhabi in the presence of US Treasury Secretary Steven Mnuchin, Emirati Minister of Financial Affairs Obaid Humaid Al Tayer, US presidential emissary to the Middle East Avi Berkowitz and Israeli and Emirati business leaders.

Environmental groups opposed to the pipeline published a public petition signed by 250 scientists from Israel and around the world, warning of environmental disaster if the plan is implemented. The groups also petitioned the Supreme Court against the plan. The state is required to respond to the objections by the end of the month. Zandberg’s struggle to change the policy of the previous government will likely result in a governmental request to delay its response until a new policy is formulated.

Zandberg will have to deal with fierce economic and diplomatic opposition to the current policy objectives. Officials in the Ministry of Energy support the Eilat-Ashkelon Pipeline agreement and there is concern that canceling it will have a detrimental effect on the important strategic agreement between Israel and the United Arab Emirates.